Flag this recipe as your failsafe, easy, buttery base for your Russian Maslenitsa party!

Maslenitsa is a moment when perhaps I catch a hint of that infamously elusive “Great Russian Soul.”  This may be because, of all the Russian Orthodox holidays, which took over from their ancient solar calendar precursars, Maslenitsa remains the most unapologetically pagan.  Like its equivalent, French Mardi Gras and Anglo-Saxon Shrovetide, Maslenitsa is a ritual banishment of winter and a rapturous welcome to spring.  Like all Carnivals, Maslenitsa encourages us to get excess out of our systems before the 40-day rigors of Christian Lent.

In Russia, Maslenitsa inspires expansive hospitality, so much a part of the national character, as well as that tendency to go slightly overboard on a feast, in the sure and certain knowledge that famine may lurk just down the road. There is the fun of masquerade, coupled with the slightly more worrying possibility of a fistfight breaking out.  There is vibrant color, lively music, and vivid firelight.

And pancakes.  Lots and lots of pancakes.

The menacing aspect of Maslenitsa is a legacy of its pagan origins, celebrating the deity of spring, fertility, fire, and passion.  This is Yarilo or Jarilo, the tenth son of the Slavic thunder god Perun.  In his youth, Yarilo is kidnapped by Veles, the god of the underworld in an echo of Greek Persephone.  In the Slavic version, the underworld is a verdant paradise where it is always sunny, green, and the earth is always damp and fertile.  Yarilo is portrayed as a beautiful youth, gifted in both the arts of war and the wisdom of peace.  He protects the weak and helpless against evil forces, lending many of his associations and attributes to the Christian St. George.

Coaxing Yarilo back to Earth

To coax Yarilo back, the ancient Slavs performed numerous fertility and fecundity rites, and many of these traditions are still integral to the celebration of Maslenitsa.  Because Yarilo embodies qualities that are at odds with one another: ferocity, strength, and courage as opposed to beauty, fertility, life, and warmth, many of the rituals involve inverting reality through masquerades, pretend battles, and mummers’ plays.

Like the Egyptian god Osiris, Yarilo is locked into an annual life-death-rebirth cycle, and like Osiris, Yarilo yearns for his twin sister and lover Morena, who symbolizes the damp rich earth.  Their reunification is the catalyst for the crops to begin to grow. They reach the zenith of their power and intensity of their passion on the summer solstice, celebrated at Ivan Kupala, or St. John’s Night.  But when Yarilo departs in the autumn, Morena’s beauty fades, and she becomes a withered crone until the spring returns.   This is why the spring equinox was celebrated in Russia as the New Year until as late as 1348.

Yarilo is lured from the underworld by massive bonfires, which symbolize the sun.  Other round, sun like symbols dominate Maslenitsa: troika rides around the village with torches propitiate the spring sun, as do the signature food of Maslenitsa:  pancakes, which are present throughout life and eaten at funerals to symbolize eternal life.  For the ancient Slavs, a ritual feast at the beginning of the year with as much rich food as possible represented the most efficacious way of vouchsafing a bountiful harvest.  For Orthodox Christians stores, Maslenitsa and Lent offer a handy liturgical excuse for rationing dwindling winter stores before the spring planting can begin. 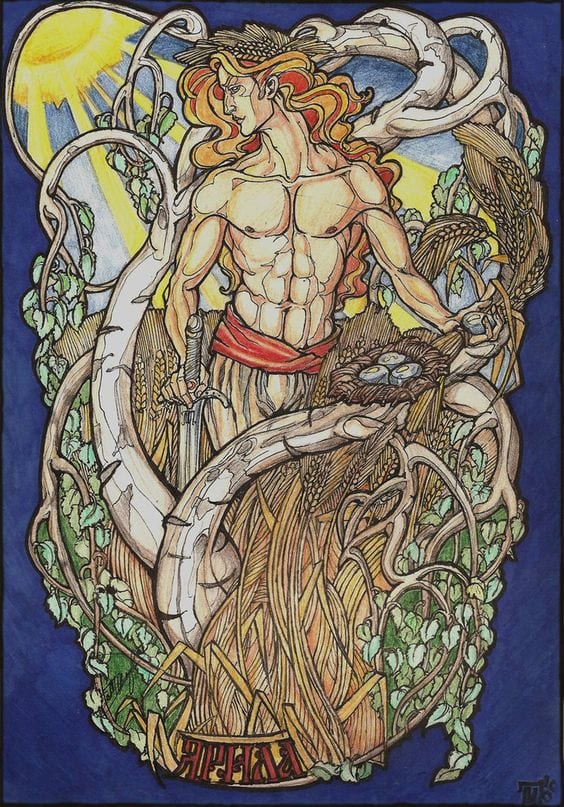 Looking for a great listen as you cook? Check out my podcast reviews

The week of Maslenitsa is divided into specific activities for each day.  On Monday, Maslenitsa begins by the construction of an enormous straw doll of winter’s effigy and parading her about the streets in a troika.  Tuesday is reserved for masquerades and mummers’ plays as well as the officially sanctioned day for young lovers to play court. On Wednesday, mothers-in-law invite their sons-in-law for blini, no doubt to fortify them for the challenges ahead on Thursday when the snow fort battles and fistfights are waged.  Friday the sons-in-law return the favor, inviting their mothers-in-law for blini.  On Saturday, it is the turn of the (ever oppressed) daughters-in-law to welcome everyone to a feast, and on Sunday, when all of the butter, cheese, milk, and blini are gone it is time to burn the effigy of Maslenitsa, banish winter for good and begin the quiet contemplation of Lent.

The “Daughter-In-Law Gathering,” is a nice way of saying that everyone has to come to yours for brunch.  Not to worry:  a Maslenitsa party requires only piles of hot, buttery pancakes and a range of both sweet and savory fillings to satisfy the appetites of those just in from conquering a snow fort or beating up a neighbor.

Russia’s Mrs. Beeton is Elena Molokhovets’, author of the authoritative A Gift to Young Housewives, a doorstop of a book with over 1000 recipes, published in the early nineteenth-century and still a bestseller in Russia today.   In her lengthy section on pancakes, she begins with the standard buckwheat blini, noting that, “…[during Maslenitsa] pancakes are as necessary to the Russians as donuts are to the Catholics and German rolls to the Lutherans.”

Some practice making pancakes goes a long way.  As Molokhovets’ notes, “…cooking pancakes requires a special knack and skill acquired only by experience and practice.”  The other famous pancake advice comes from the Russian proverb: “The first pancake is always a dud.”

To avoid excessive duds, make your batter ahead of time — this recipe certainly benefits from resting a bit (even overnight) — and then get your skillet(s) going about 20 minutes before your guests are due.

“The first pancake is always a dud”

By the time they arrive, your house will be redolent with that intoxicating eggy, buttery pancake smell; the duds will be securely hidden in the trash bin, and you’ll have banked a lovely stack of pancakes in the oven.

This recipe is a failsafe composite of several excellent blini concepts: buckwheat flour gives the blini a nutty taste and lovely brown patina; using buttermilk lightens up the batter and adds a flavorful tang.  With no fussy yeast proofing or hours-long risings, this recipe is ready to go when you are!   It makes equally good small blinchiki as well as bigger crepe-type pancakes. The choice is yours!

This recipe is a failsafe composite of several excellent blini concepts: buckwheat flour gives the blini a nutty taste and lovely brown patina; using buttermilk lightens up the batter and adds a flavorful tang. With no fussy yeast proofing or hours-long risings, this recipe is ready to go when you are! It makes equally good small blinchiki as well as bigger crepe-type pancakes. The choice is yours!
Prep Time 45 minutes
Cook Time 40 minutes
Total Time 1 hour 25 minutes
Servings 24 Blini (size varies)

Smoked Salmon or Herring with Lemon, Sour Cream, and Dill 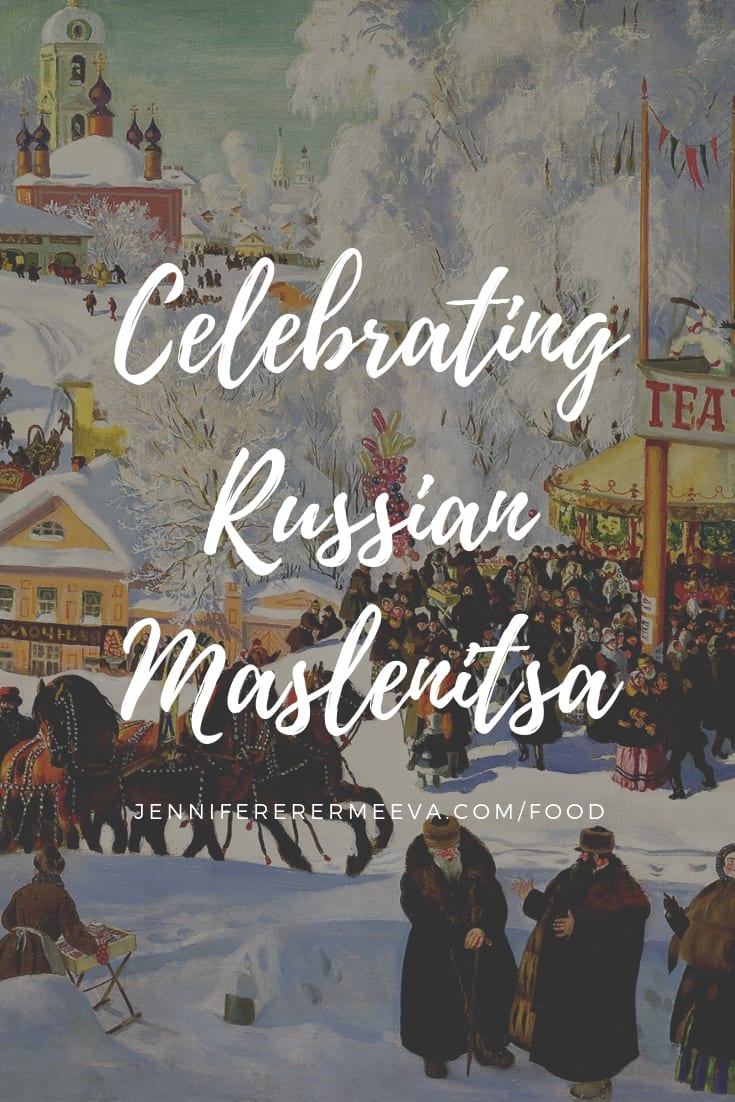 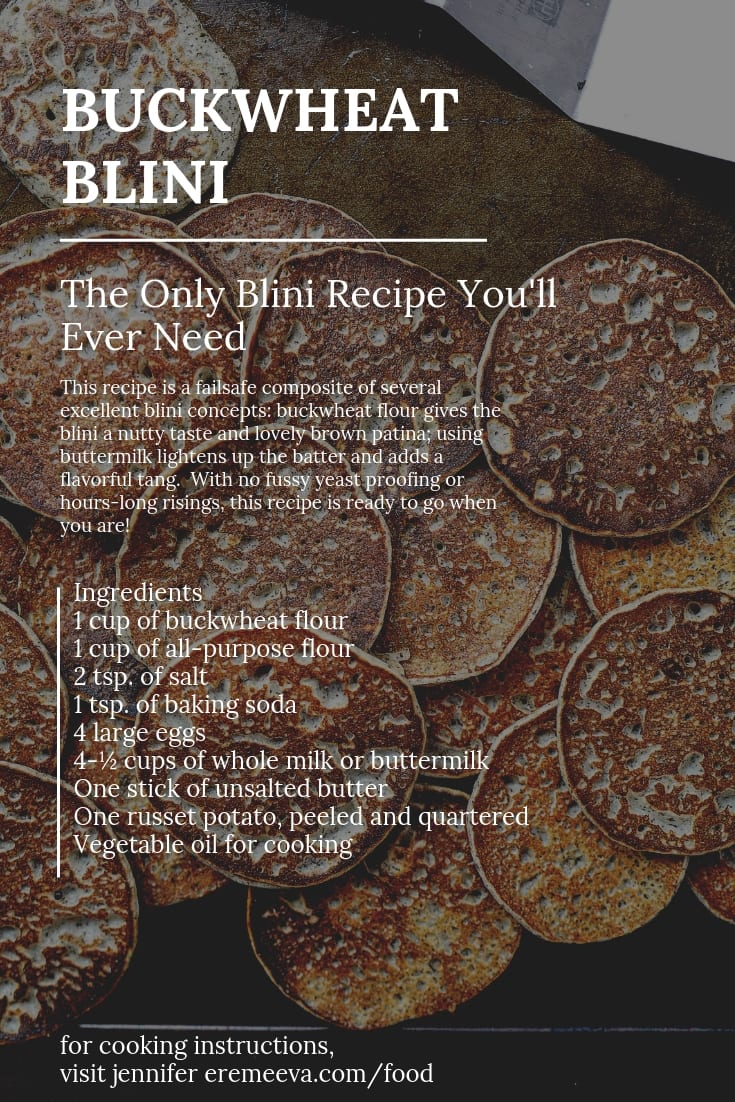 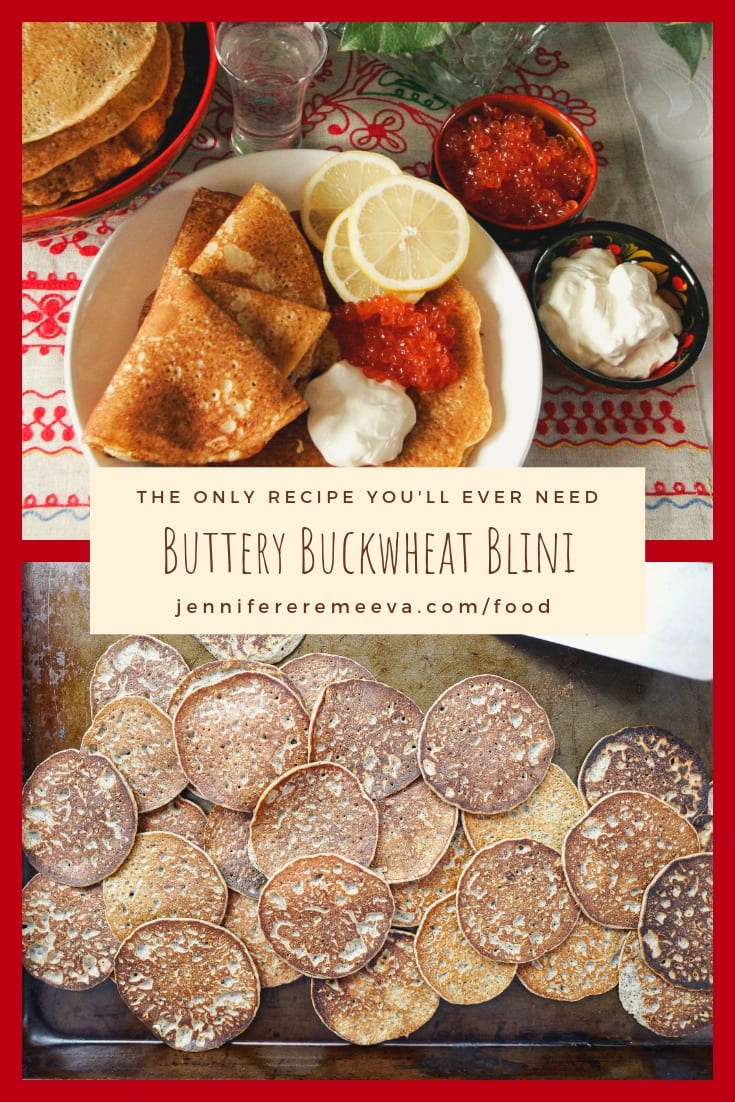 This recipe first appeared in The Moscow Times on February 13, 2018 in an article entitled A Dutiful Daughter-in-law’s Maslenitsa Party.

View all of my Lifestyle articles
PodcastPodcast ReviewsPodcastsPodcasts