Today, Russia inaugurated a new public holiday: commemorating the day in the 10th Century when Prince Vladimir of Kiev baptized the Russian people into the Greek Orthodox Church. 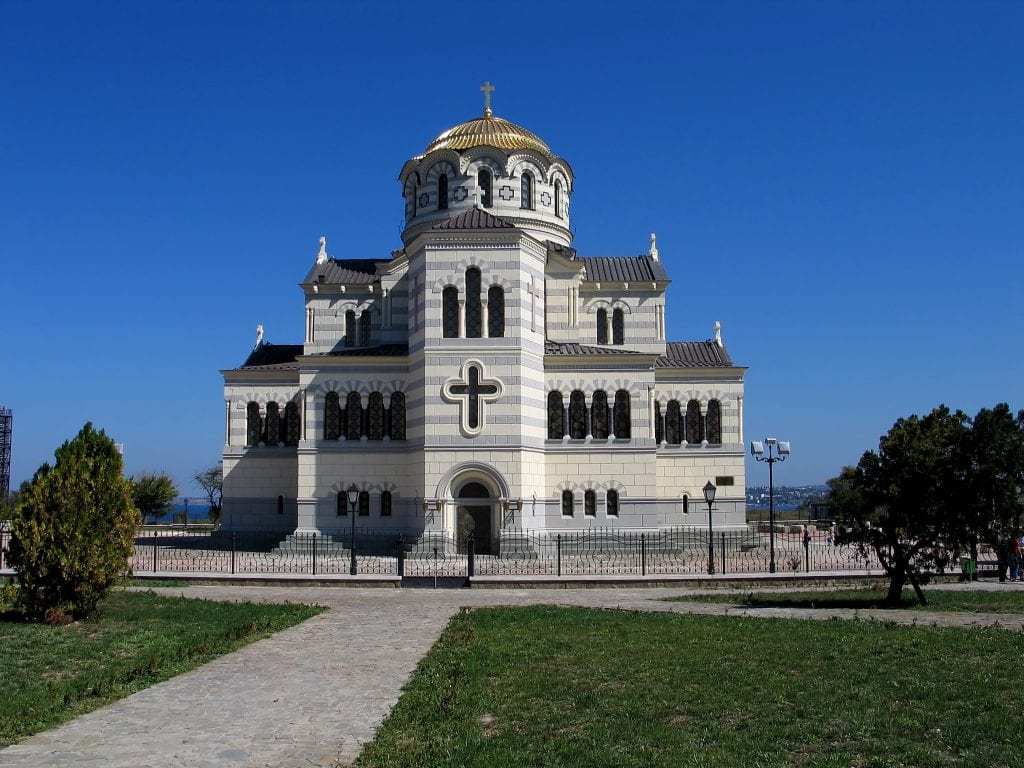 Vladimir’s decision to convert earned him the title “Apostolic” or “Equal to the Apostles,” but in truth, his motives in joining one of the major world religions seem to have been as much political and strategic as spiritual.  In his choice of Eastern Orthodoxy, Vladimir set a cultural course for Russia, with profound political and geographic implications, which resonate today.

Vladimir was a pagan prince, the youngest – by some accounts the bastard — son of the warrior Prince Sviatoslav: a ruler who spent his early reign consolidating Kiev as the center of power, by exploiting the petty feuds among the minor Varangian (Viking) princes.  He spent the latter half sparring with the Byzantine Greeks in the Crimea, achieving an uneasy peace by his death in 972.  Vladimir, for his part, recognized the need to create better ties with the powerful nations to the west and the south, and shrewdly saw the advantages a common religious culture offered.   His choice was between the four majors:  Judaism, Islam, Western Catholicism, and Eastern Orthodoxy.  Judaism seems to have been rejected immediately (plus ca change…) because it was the religion of the enemy Khazars, and so Vladimir dispatched ambassadors to the capitals of the three remaining religions to see for themselves and not rely on the foreign emissaries.

“For on earth there is no such splendor or such beauty, and we are at a loss how to describe it.  We know only that God dwells there among men.”

~ Ambassadors of Grand Prince Vladimir to Greece as told in The Primary Chronicle,

What happened next depends on who is telling the story.  Anecdotal Russian history says Vladimir was leaning towards Islam, despite the reports that, “there is no happiness among them, but instead only sorrow and a dreadful stench;” but when the Ambassadors revealed the teetotaler clause in the fine print of the Koran, Vladimir gravely shook his head, proclaiming, “Drink is the great joy of the Russian people,” and rejected it outright.

The Ambassadors from the “Germans” (the Holy Roman Empire) reported that they saw  “…them performing many ceremonies in their temples, but we beheld no glory there.”

It was the Greeks, rolling out the smells and bells as only they could, who really blew the ambassadors away.  They walked into the Cathedral of St. Sofia in Constantinople and were rendered speechless.   “…We knew not,” they reported to Vladimir, “whether we were in heaven or on earth.  For on earth, there is no such splendor or such beauty, and we are at a loss how to describe it.  We know only that God dwells there among men…”

Vladimir, who was an excellent PR person (today, perhaps not un-coincidently, is also the Day of the PR Specialists) and asked his Ambassadors again and again what they thought he should choose, and they, being good Russian bureaucrats, responded again and again that, really, they couldn’t say, that it was up to him.  Vladimir, already leaning in the direction of Byzantium, decided to shelve the decision until he could seal the deal with some military action.   He laid siege to the Byzantine stronghold of Kherson in the Crimea and achieved eventual victory by cutting off their water supply.

In negotiating with Emperor Basil, Vladimir revealed his hand: like another Vladimir approximately 1,012 later, he wanted a seat at the A-list table of nations. For Prince Vladimir, this was represented, not by the G-8, but by marrying the Emperor’s sister, Princess Anna, who was “born in the purple.” In exchange for this, suggested Vladimir, he might – just might – be willing to consider becoming a Christian.

The Primary Chronicle suggests that Princess Anna thought this was just about the worst idea she’d ever heard, but she dutifully loaded up her bibles, rounded up her clergymen and set out – as a lamb to the slaughter – to baptize Vladimir, and then marry him.   Upon reaching Vladimir, she found him suffering from a disease of the eyes, which had rendered him blind.  She insisted on baptizing him immediately in the Church of St. Basil at Kherson, and immediately his sight was restored.   Vladimir claimed, “I have now perceived the one true God.” And he adopted the name of Basil as a complement to both the church and the Emperor.  He married the Princess, and, it is assumed, they lived pretty much happily ever after.

Vladimir set the tone for future rulers of Russia by forcing cultural change by means of threats of “risking your prince’s displeasure,” and just as beards came off for Peter The Great, mass baptisms took place at a steady clip back in Kiev.

And the rest, as they say, is history.

Congratulations to all Russian Orthodox Christians on the Day of Baptism of Prince Vladimir!

Ekaterinburg’s Grisly Centenary: The Final Fate of the Romanovs