Veal Orloff: A French Classic Fit for a Russian Prince

Veal Orloff: The French Classic Fit for a Russian Prince

The dinner party staple that waits for no man...or woman.

Say “Veal Orloff” to Americans and you get a range of reactions. Obviously, there is the recoil by those who think it’s cruel to kill a cute calf. With these people, I just move the conversation in another, safer direction, such as the best cheeseburger they’ve had that month. Much safer.

Other Americans will do that palm to sternum gesture and sigh, “Julia.” And this is spot on. Julia Child, that famous expatriate played a major role in bringing this rich saddle of veal stuffed with mushrooms and cream across the Atlantic to America, where it became a showy party piece in the 1960s. And dinner parties in the 1960s are where you get the most common response: a smile, perhaps a chuckle and the words, “The Dinner Party.”

Betty White and The Dinner Party

The Dinner Party refers to a hilarious episode of the Mary Tyler Moore Show. Mary is forced to organize a dinner party on very short notice for a visiting Congresswoman. Mary is not a natural entertainer, nor a dab hand in the kitchen, as her best friend Rhoda reminds her. So Mary persuades Sue Ann Nivens, the annoying but accomplished “Happy Homemaker” from her newsroom to do the cooking. Betty White steals the scene below, as she forces everyone to sit down as soon as the Congresswoman arrives.

“Mary, do you know what happens when Veal Prince Orlov stays too long in the oven?” Sue Ann coos.
“No, what?” asks the somewhat frazzled Mary.
“He dies,” says Sue Ann.

I’m firmly with Sue Ann on this one. I find it super hard to “create urgency” with Velvet and HRH when I’m bringing something to the table, especially if it is time-sensitive like fried eggs, which wait for no man, not even a Russian alpha male. I’m still not speaking to one of my in-laws because she chose to ignore an invitation to luncheon where I was doing individual cheese souffles.

If you are going to spend the hours it takes to construct Veal Orloff, you’d better get everyone to the table promptly 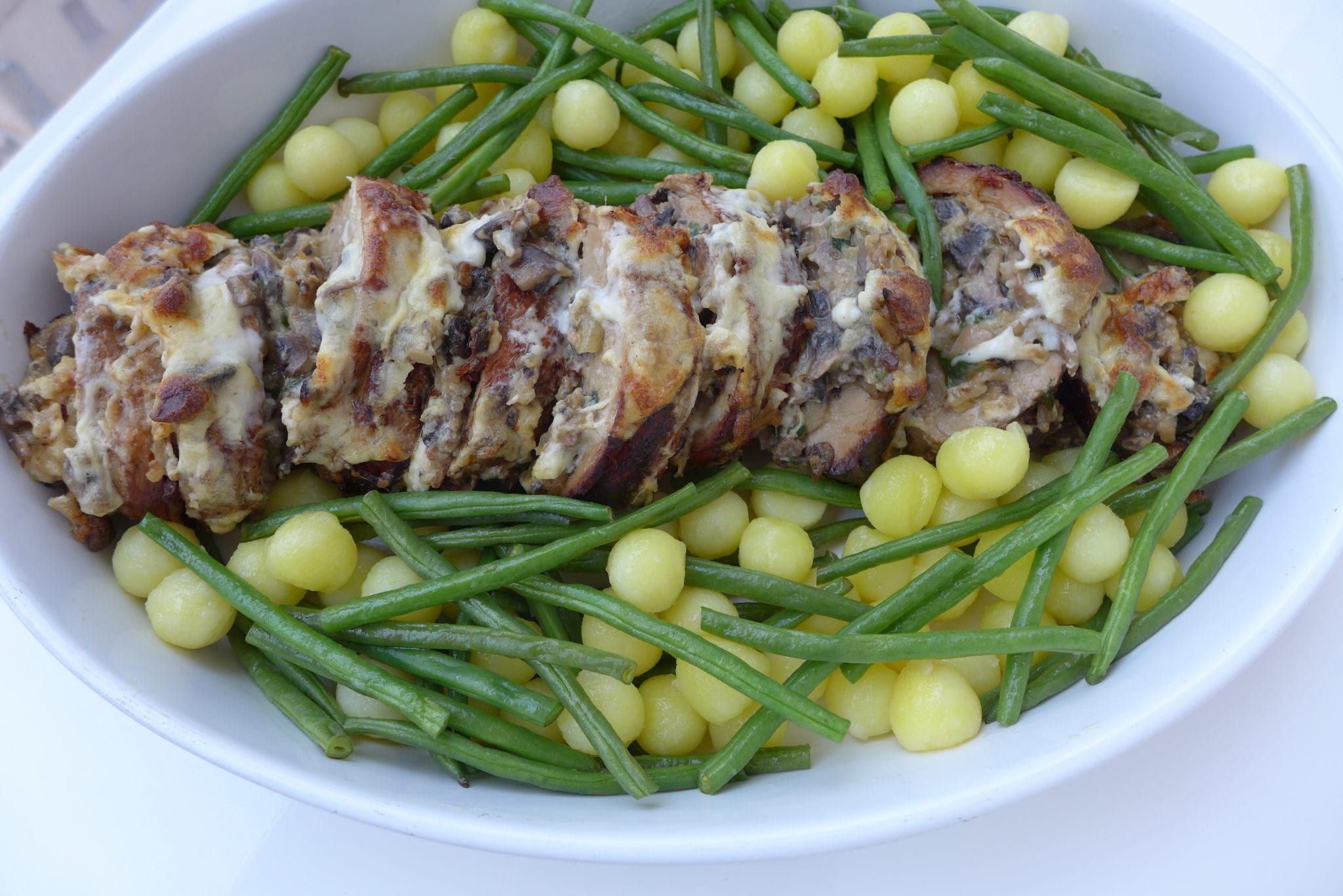 Veal Orloff is the Flashy Recipe in Your Back Pocket

Every cook needs a flashy recipe in their back pocket: something located at the tricky intersection of reliable and impressive: something to produce when meeting the in-laws for the first time, or entertaining the boss — or, indeed, a Congresswoman at home. Veal Orlov, or “French veal” as the Russians call it, is an excellent choice, featuring the dynamic duo of veal and mushrooms and so much butter and cream that it’s hard to go wrong.

Who was Prince Orloff?

Veal Orlov is not Russian, though Russians have enthusiastically embraced it as their own. It is an entirely French dish, popularized by Chef Urbain Dubois in the Russian embassy in Paris. Chef Dubois appears to be as diplomatic as his master, after whom he named the dish: Prince Nikolai Alexeievich Orlov (1827-1885), the Russian Ambassador to France

This much-decorated military commander, writer, thinker, and diplomat was one of the leading minds of his generation. Though very much part of the innermost Imperial circles, Orlov was a passionate advocate for reform. He welcomed the Abolition of Serfdom in 1861 but immediately began petitioning to end corporal punishment. He served the Tsar as ambassador in Germany, Belgium, and France, where he died and is buried.

Interestingly, an Orlov currently serves as The Russian Federation’s ambassador to France, and I feel sure that this rich and indulgent dish makes a frequent appearance at his table, as it did the Prince’s, and can on yours! 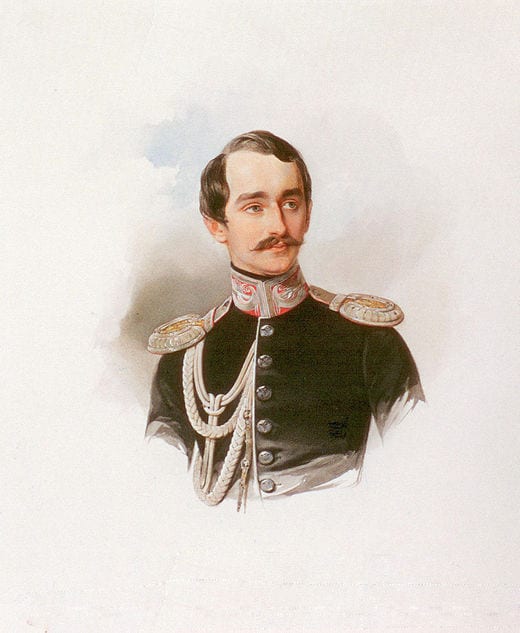 The recipe below has been modified to cut down on the fussy, time-consuming bits. Although the recipe has several stages and multiple ingredients, the soubise, the duxelles and the Mornay sauce can be prepared ahead of time, which I highly recommend. I’ve also added the step soaking the veal in a brine to begin with. Veal is very lean and therefore can dry out quickly. Brining prevents this, as well as infusing the meat with more flavor. Serve Veal Orlov with new peas, haricot vert, new potatoes, or rice.

And get everyone to the table just before serving!

This rich, creamy French/Russian classic was named in honor of one of Russia's ambassadors to Paris. It crossed the ocean to become a popular dinner party classic in the mid twentieth-century
Prep Time 3 hours
Total Time 3 hours
Servings 6 people

Serve with buttered green vegetables such as peas or string beans.
SaveSave 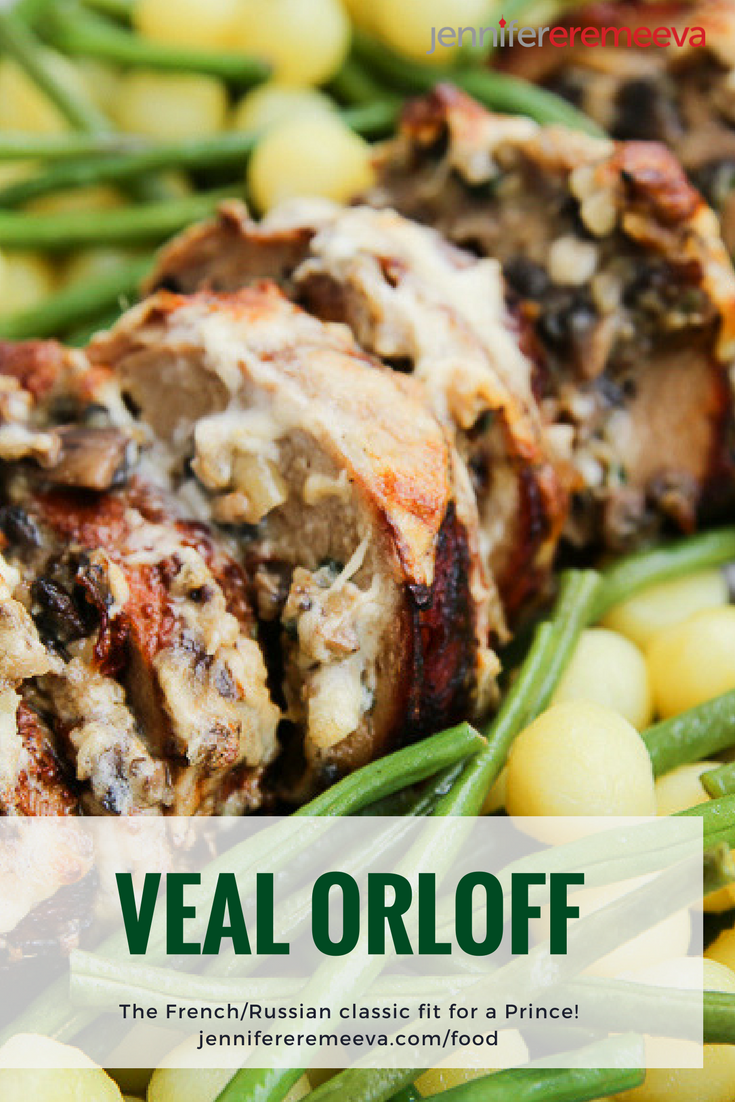