Travel to Bosnia and Herzegovina

Mostar’s Old Bridge — or “Stari Mosta” in multicultural Bosnia and Herzegovina has always seemed more symbol than mere conveyance, and no more so than in its most recent iteration.

Encountering the Old Bridge of the Bosnian town of Mostar in the seventeenth-century, a Muslim traveler resorted to hyperbole to describe region’s most iconic monument:

The bridge is like a rainbow arch soaring up to the skies, extending from one cliff to the other. ...I, a poor and miserable slave of Allah, have passed through sixteen countries, but I have never seen such a high bridge. It is thrown from rock to rock as high as the sky.

Mostar: The Guardians of the Bridge

The Old Bridge — or “Stari Mosta” in Mostar (“guardians of the bridge”) has always seemed more symbol than mere conveyance, and no more so than in its most recent iteration.  The Old Bridge survived centuries of Ottoman rule and decades of Soviet influence only to be bombed in 1992.

The Old Bridge was commissioned by the most famous of the Ottoman rulers, Suleiman the Magnificent (1494-1566), in 1557.  The Sultan spent a staggering 300,000 silver pieces to replace a rickety wooden and rope bridge with a more serviceable stone edifice.  Architect Mimar Hayruddin’s striking “humpbacked” design, similar to those seen in Venice, creates the dramatic — almost magical — optical effect of a complete ellipse when the bridge is reflected in the water.  At such moments, both the Old Bridge and Mostar seem like the movie set of a fairytale film.

Mostar’s Old Bridge spanned the icy waters of the River Neretva, linking two sides of a town that became a byword for multiculturalism during centuries of Ottoman, and later Habsburg Austro-Hungarian rule.  Mostar was located along the lucrative trade route between the bustling trading ports of the Adriatic, and Bosnia, with its abundant natural resources.  The traffic and the bridge made Mostar an important commercial and political hub of the region, and the Old Bridge a vital link in the trade route chain.

Discover more about this region: A Reading List for the Balkans

Even as the Old Bridge’s ancient stones sunk to the bottom of the Neretva, plans were underway to restore Mostar’s most iconic landmark.  Spearheaded by Mostar architect and Islamic architecture historian, Amir Pasić, the eventual restoration brought together an international coalition of architects, engineers, construction experts, historians, and eager amateur volunteers from many different countries.  $15.5 million was eventually raised by donations from the World Bank, UNESCO, the Aga Khan Foundation and the governments of Turkey and Italy.

Hungarian divers recovered many of the original stones at the bottom of the river, and after four years of dedicated work, the Old Bridge once again bridges the divide between east and west:  a much-needed and potent symbol of reunification and reconciliation for multi-cultural Mostar and the Bosnian-Herzegovinian people. 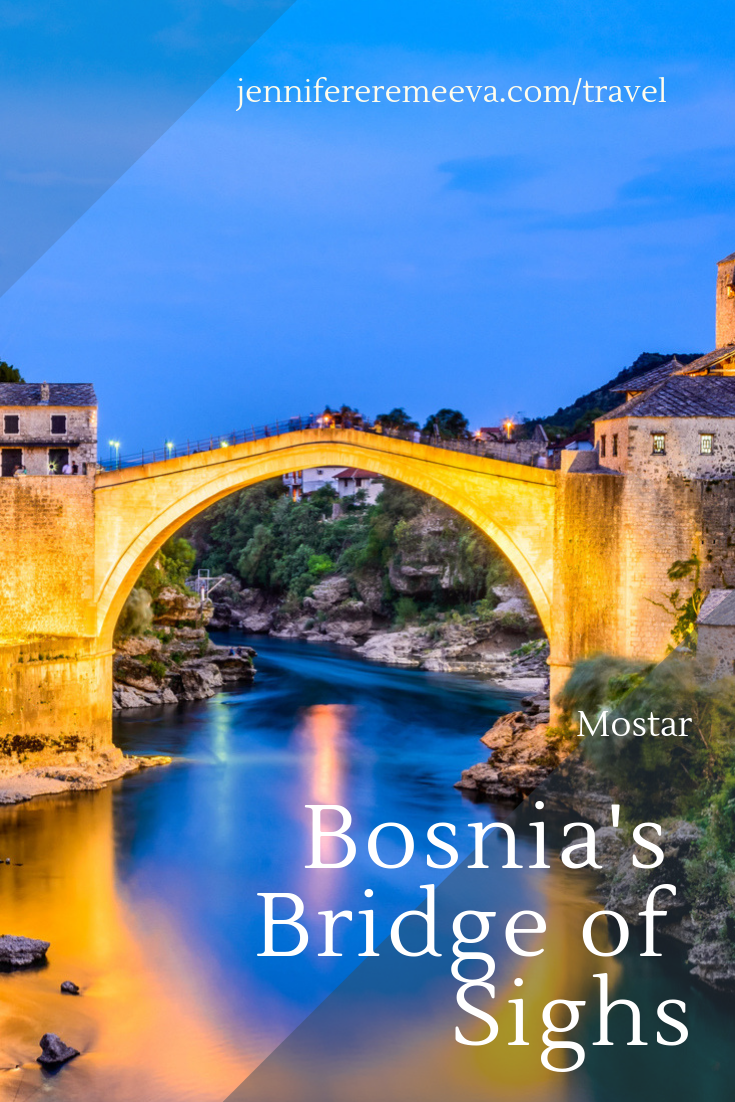 You can find more great resources about the Balkans on my dedicated Balkans Pinterest Board.

An earlier version of this post was researched for leading American tour operator, Alexander + Roberts in conjunction with their itinerary Journey to Croatia and Montenegro.