I could never be a spy, but how lovely to think that I can cook like one!

Cabbage soup or “Shchi” has unfortunate associations: scant and watery prison fare, bland and tasteless staple of the Soviet tourist hotels, or just something you cobble together when you want to slim down quickly.  It doesn’t have to be like that.

“I’ve always suspected you were a spy,”

My friend Max once said that after a spoonful of my Cabbage Soup. “And this confirms it — you’re working for us aren’t you?” He tapped the fingers of his right hand on imaginary epaulets on his left shoulder, a gesture in Russia, which denotes association with Russia’s infamous Secret Service.

“You’ve been binge watching too many episodes of The Americans,” I protested, trying to appear both modest and enigmatic. I felt absurdly proud of myself as Max slurped up his large bowl of soup, and silently held his plate out for seconds.

It doesn’t get much better in the food business than this: I could never be a spy, but it’s nice to think I can cook like one.

Cabbage soup or “Shchi” in Russian, is a notoriously tough culinary nut to crack. Readers of the more angst-ridden vein of Russian literature recognize it as a permanent fixture on prison or gulag menus. Tourists to the Soviet Union in the 1970s noted that it made a depressingly frequent appearance at bland and tasteless Intourist lunches. In the decadent and godless West, cabbage soup resorted to by ladies-who-don’t-lunch as a last ditch effort to drop a dress size. With inspiration like this, is it any wonder Shchi has got itself a bum rap outside of Eastern Europe?

Shchi is one of the cornerstones of Russian cuisine, as testified to by a challenging tongue twister students of Russian language are taught to learn the subtle differences between the sibilants: “Shchi da Kasha, Pisha Nasha,” it runs, meaning “cabbage soup and buckwheat kasha are our only foods.” 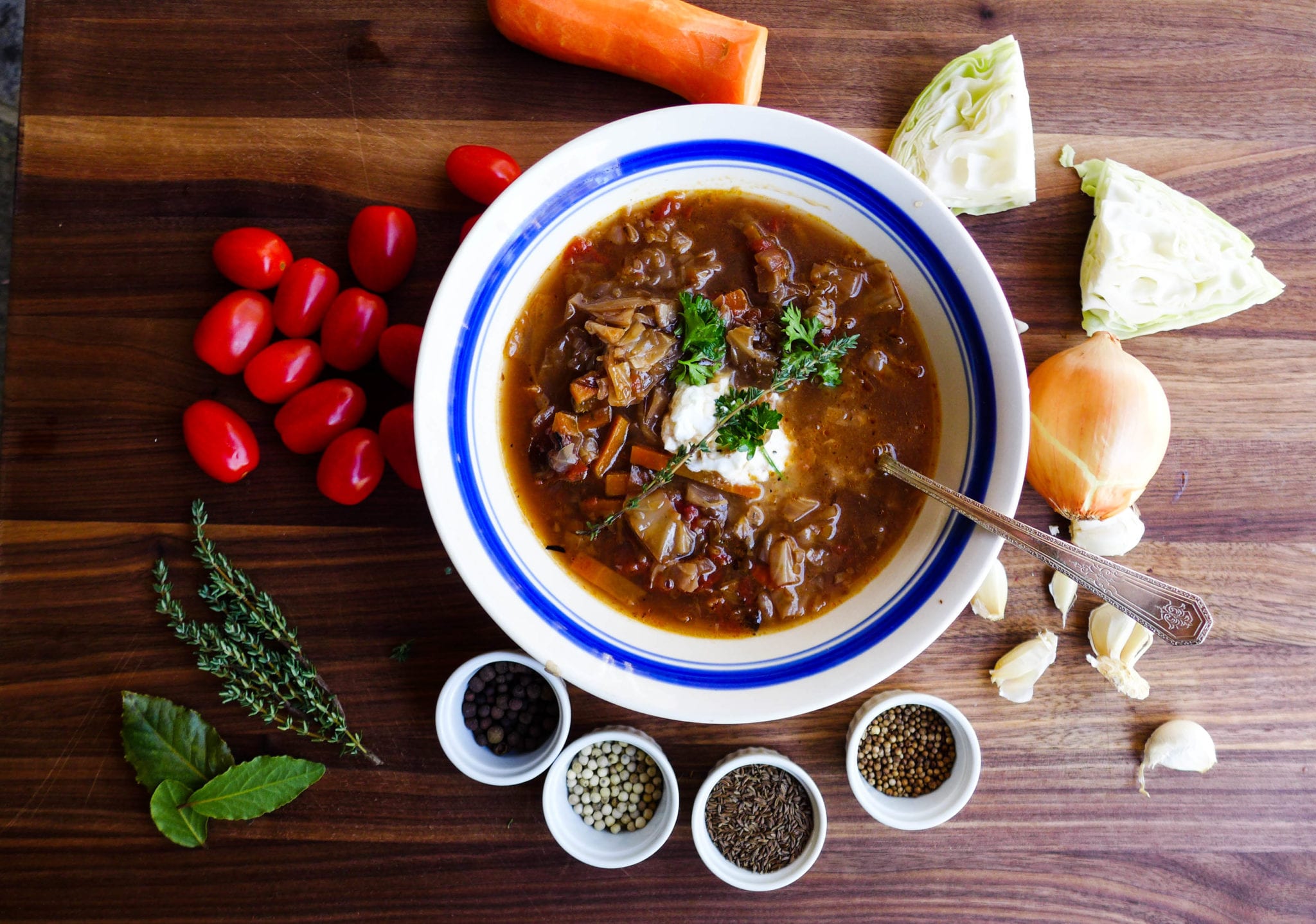 Today marks the end of the triple whammy of Catholic Christmas, Soviet New Year, and Russian Christmas. Thank God. I’m more than ready to go on the “Pisha Nasha” diet for a while. Old New Year is firmly behind us, so it’s time to bin the dying Christmas Tree and purge the fridge of all the decadent holiday fare.

I pulled out all of the stock bags from the freezer, filled with the remains of holiday joints and roasts, tops and tails of vegetables, cheese rinds and other kitchen remains to simmer on the stove while I crank up the oven to its highest roasting setting. It’s Shchi Time!

Done right, Shchi is neither watery, nor tasteless, but a delightfully hearty soup, bursting with dominant umami flavors of cooked root vegetables spiked with a tang of fermentation. Thick and filling, Shchi can beat back the coldest, rawest days January can serve up.

The state secret of Shchi lies in the preparation.

Like all peasant soups, Shchi was cooked “low and slow” on a “pechka” or stone stove which stood at the heart of all peasant dwellings. During the autumn and winter, the fire in the pechka burned continuously, emitting a steady heat, ideal for simmering pots of soup, grains, and stews.   The best way to imitate this method is in a slow cooker or a cast iron Dutch Oven on a low setting.

But the real state secret (said she, tapping her fingers on her shoulder) is to roast the main vegetables — cabbage, carrots, and tomatoes — before adding them to the pot. By doing so, much of the water that is the scourge of Gulag “Soup of the Day” leeches out, leaving a base of nutty, umami cabbage with accents of sweet, caramelized tomatoes and carrots. 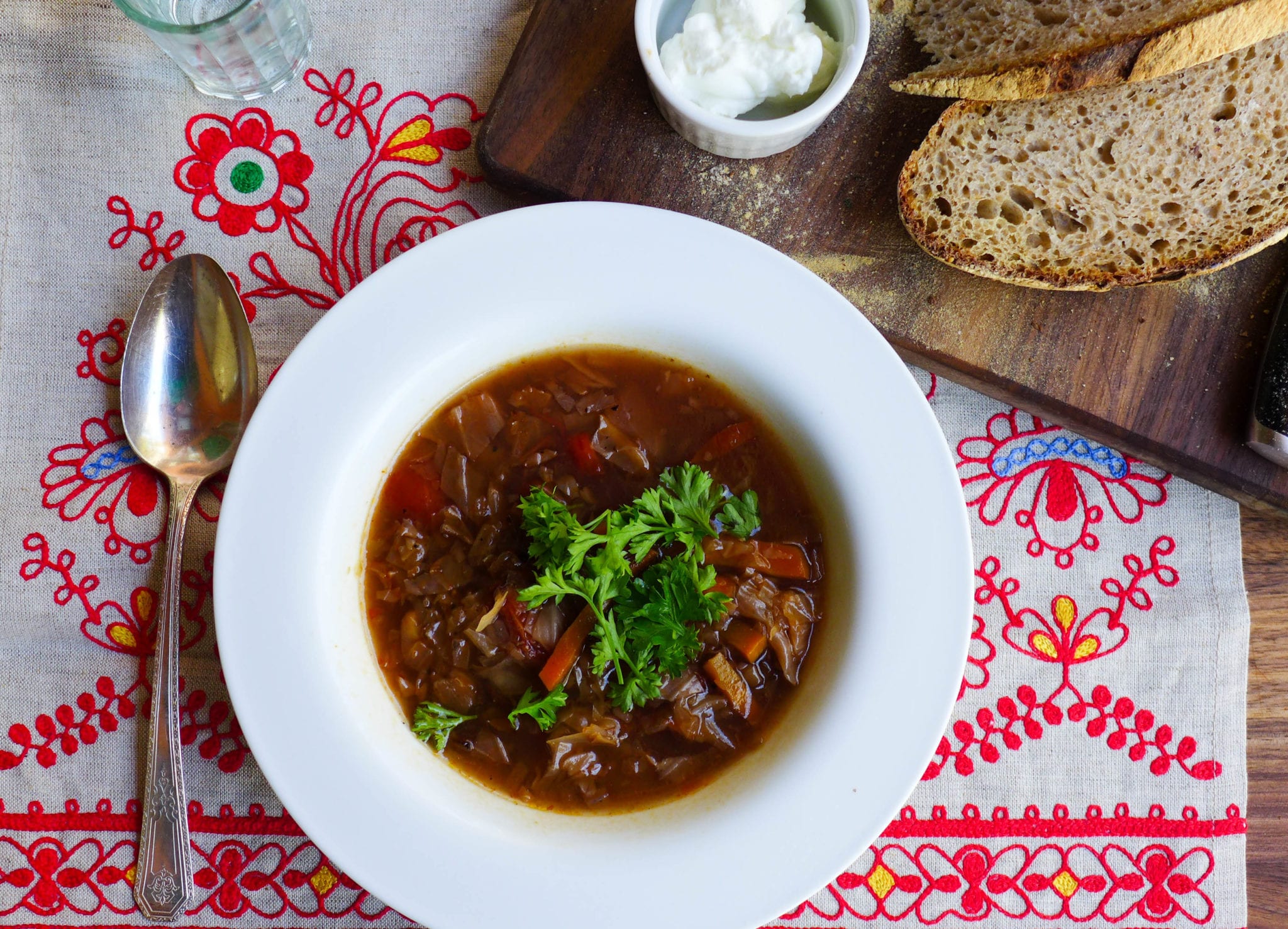 Although Shchi is marvelous as a vegetarian soup, a smoked ham hock, chunks of thick, streaky bacon, or a bone-in beef shank elevates this soup into a meal.   The basic recipe above, like all Russian soups, this should be considered a template upon which you can endlessly riff, substituting and adding ingredients such as potatoes and parsnips, and additional spices as you such as paprika, cumin, savory, and others.

Garnish the finished product with a generous dollop of sour cream or crème fraîche and fresh herbs such as dill and thyme. The best accompaniment to Shchi is thick slices of a good rye or pumpernickel bread and a cold shot of vodka.   And, of course, a few episodes of The Americans… 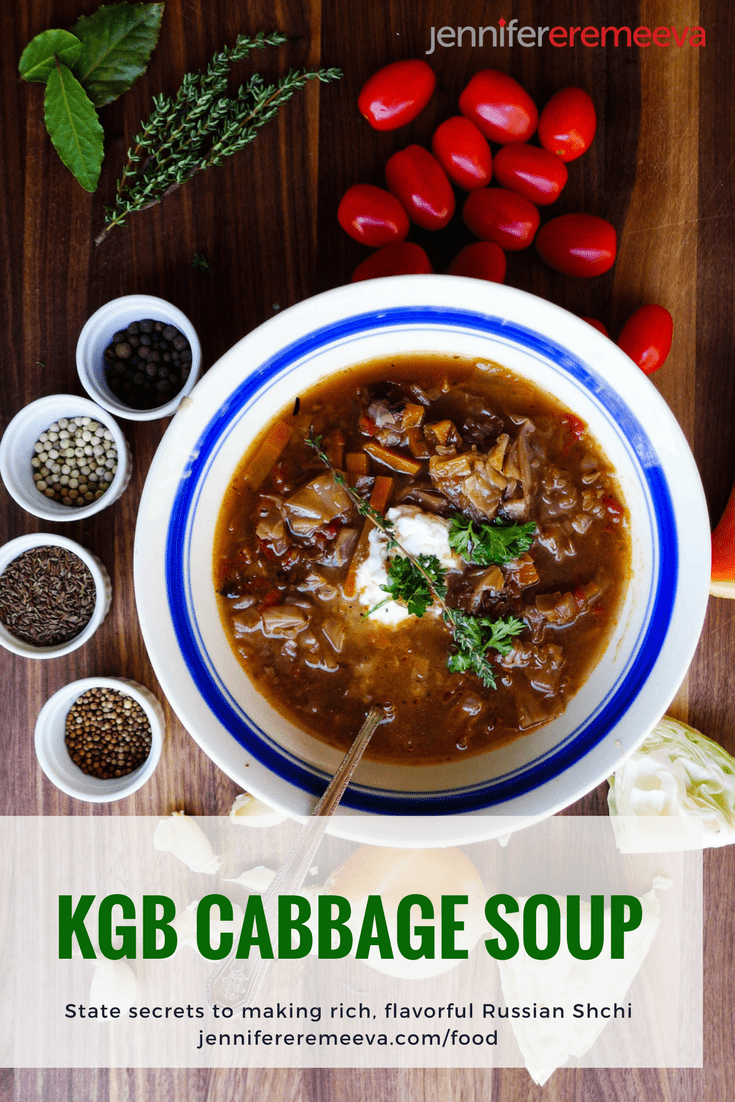