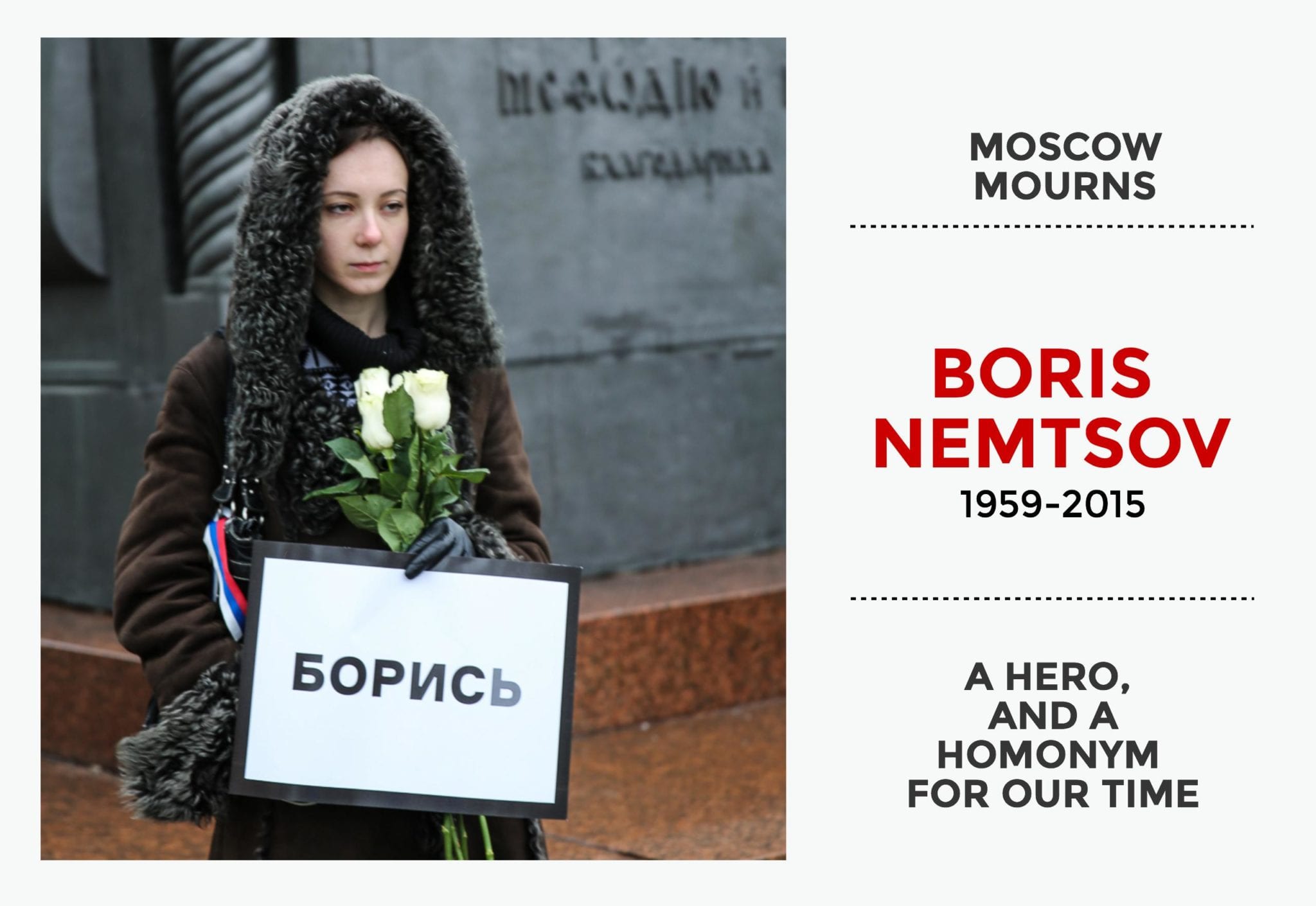 “What they really need,” said my friend and veteran Russian opposition observer, Lisa as we climbed the stairs from Kitai Gorod Metro Station on to Old Square, “is a color.”

“That’s true,” I agreed, “and a slogan of some sort would be good too.”

The tattered remnants of Russia’s opposition politicians, while dedicated, have always lacked a unified brand message as well as unanimous political platform; and this has been true since its disparate leaders not so much coalesced as coagulated in 2012. One of its leaders, Alexei Navalny, has been effectively muzzled to all but the minority that is Russia’s social media-savvy creative class, and these days commutes between house arrest and actual prison. The opposition’s potential patriarch, Mikhail Khodorkovsky, released from 10-years in a Siberian penal colony, has understandably chosen to make his home in Switzerland. So this left Boris Nemtsov, the slightly past-his-sell-by date but still charismatic and resolute former First Deputy Prime Minister as the de-facto leader of the opposition: a position he enjoyed by virtue of being a.) inside Russia and, b.) at large.

Until last Friday night, that is, when he was shot in the back four times by unknown assailants, a few yards from the Kremlin walls.

The political rally, vaguely branded with an optimistic green “SPRING” logo, which Nemtsov had planned to lead on Sunday turned in to a solemn, certainly funeral memorial march. Municipal officials sanctioned “SPRING” to take place in the grotty outskirts of Moscow, but the memorial march threaded its silent way through the very heart of downtown Moscow. 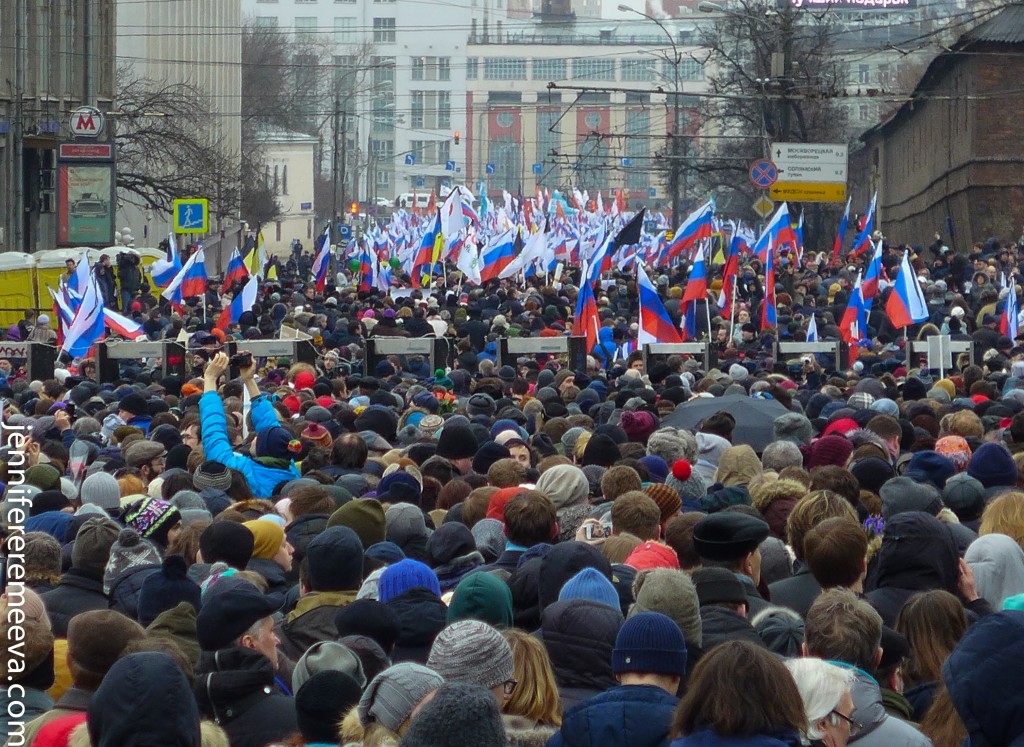 Mourners carrying Russian tri-colors stream on to the Moscow River embankment to join the memorial march.

We emerged into the damp, grey afternoon (weather by Central Casting) and it was immediately apparent that the opposition had found itself a color. A tricolor. Sometime during the long, stunned hours of disbelief on Saturday, the opposition had co-opted the Russian flag as its standard.

“Very clever,” I said to Lisa, as we accepted 8-inch hanks of tricolor and black funeral grosgrain ribbons. We put them in our bags since we both feel that this is not really our fight, although we know which side we’re rooting for. 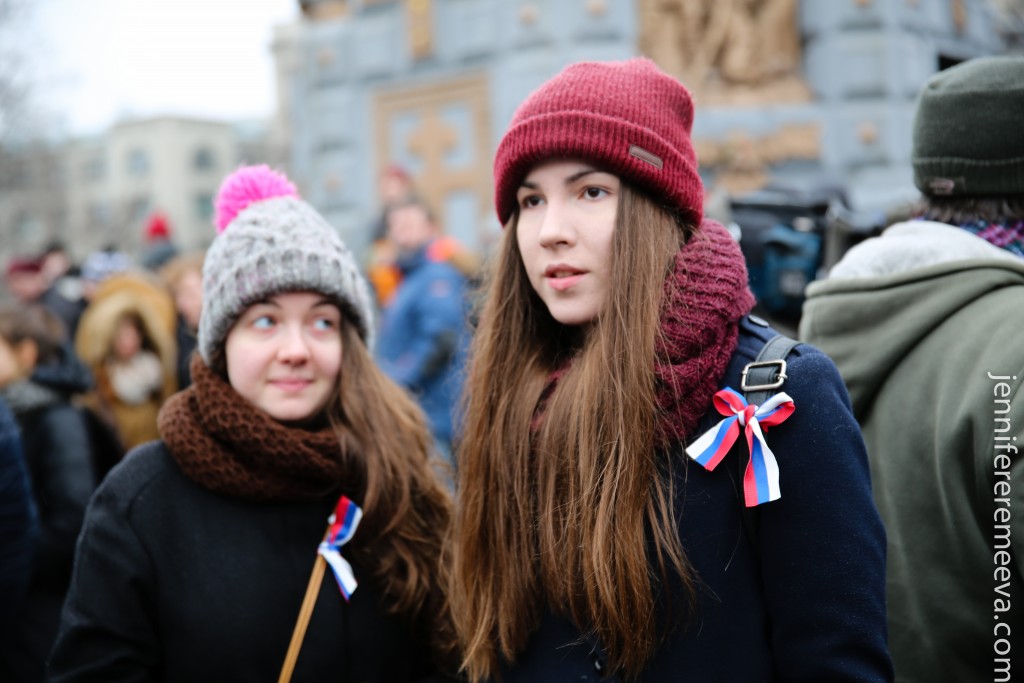 Marchers claimed the tricolor as their motif.

The Russian tricolor seemed a particularly apt tribute to one who had been an up-and-coming reformer when the tricolor replaced the hammer & sickle as the symbol of a new post-Soviet Russia.    It was heartening, on that cold day, to see the bright and clear red, white, and blue flap in the wind against the grey sky — at times the only sound you could hear in Old Square, except for the churning of the occasional police helicopter, hovering menacingly over the crowd.  It was moving to see the grim determination with which the mourners tied the tricolor on to their somber winter coats and headed patiently into a crowd to slowly make their way through metal detectors and on to the Moscow river embankment.

The tricolor was clever, and apt. Nemtsov adored Russia, and was passionate about its post-Soviet potential. He was a strong right arm to Russia’s first president, Boris Yeltsin, until, well, he wasn’t. But he remained a patriot, and a firm believer in Russia.

As we milled about Old Square, watching the crowds assemble,we saw a few of the slogans the opposition was test driving: 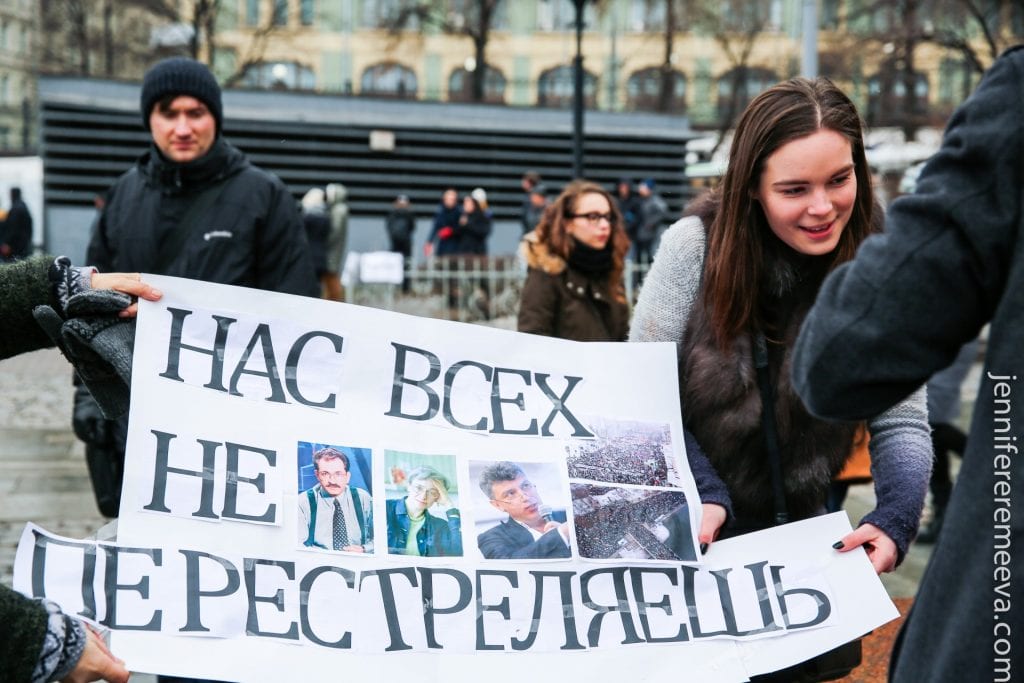 “You can’t kill us all” reads this placard, displaying pictures of slain journalists Listiev, Politkovskaya, and Mr. Nemtsov. 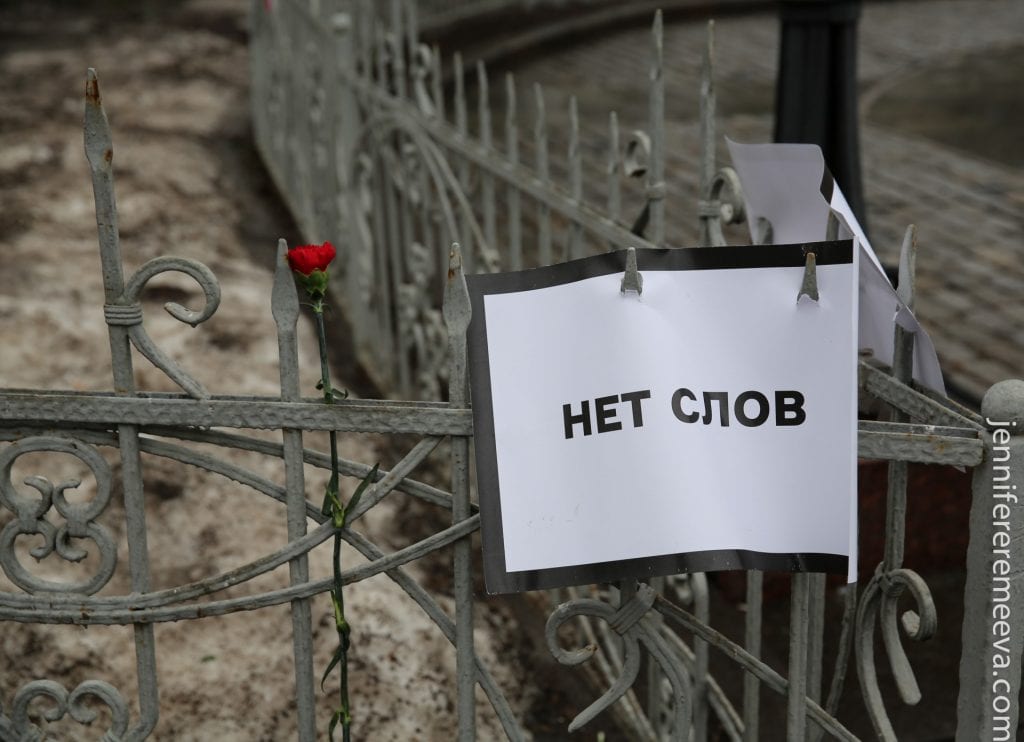 “There are no words” reads this placard, affixed the railing with one lone flower. 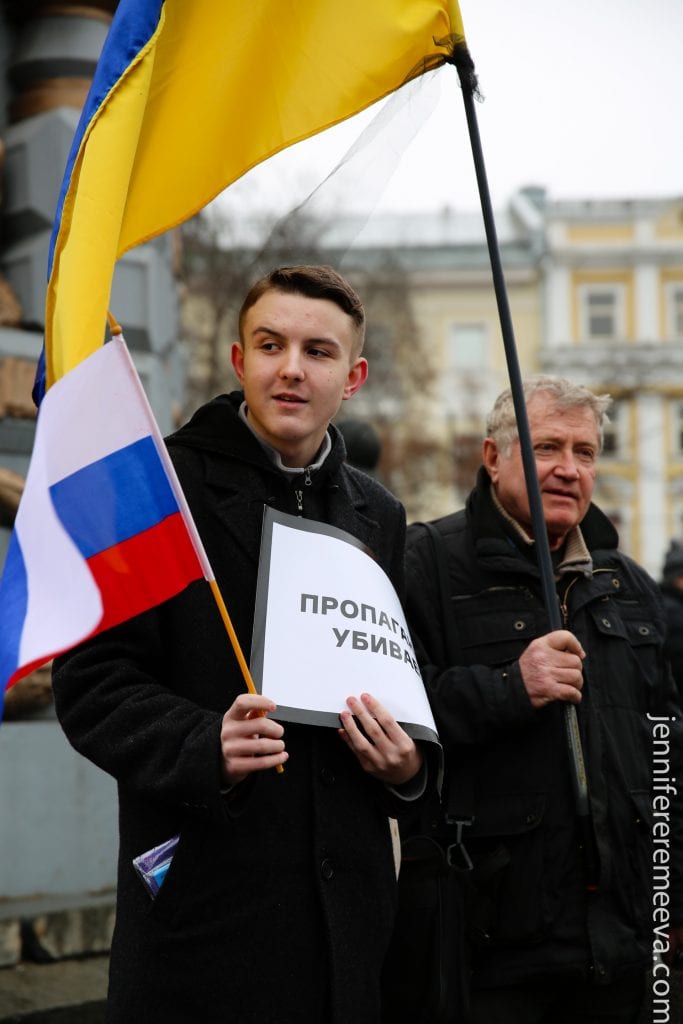 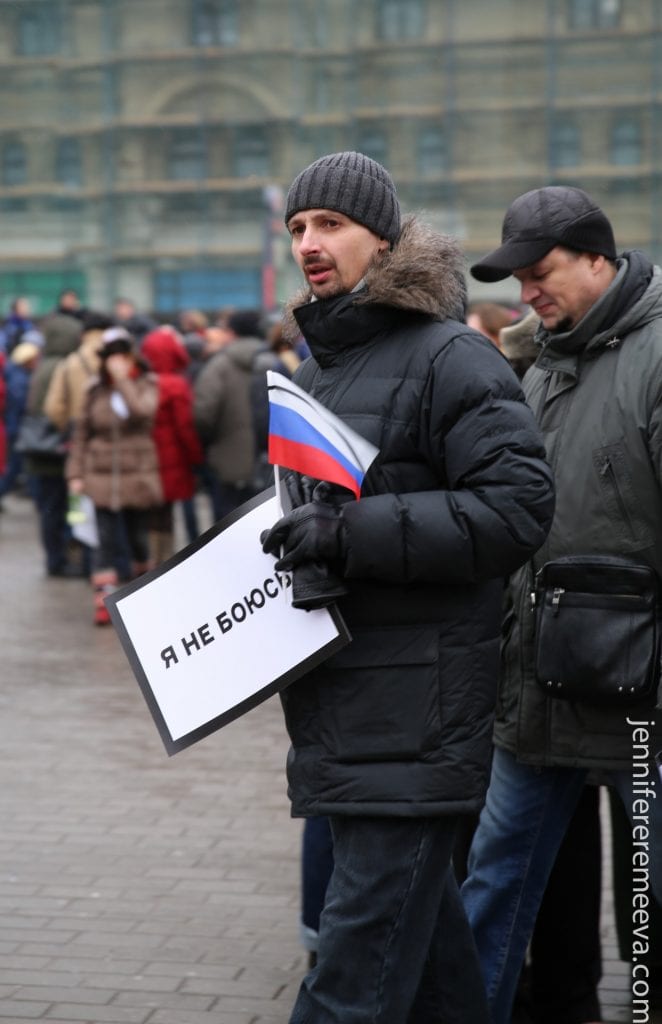 “I am not afraid.” declares the placard, held together with a Russian flag adorned with a black funeral ribbon. 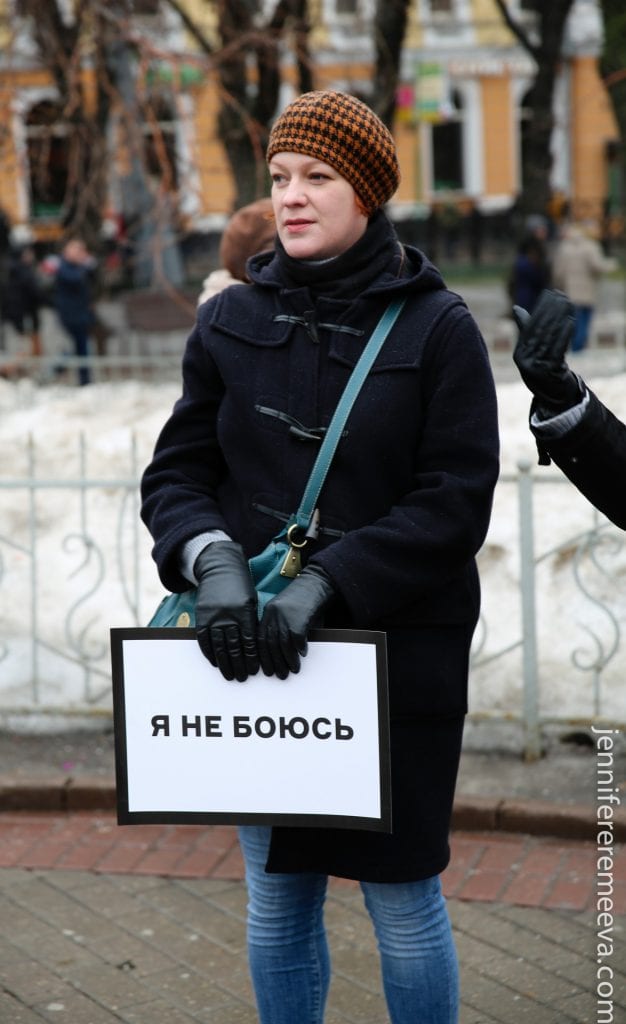 “I am not afraid” read placards carried by participants of Boris Nemtsov’s memorial march.

A Homonym for Our Time

The one, however, which I think best captured the mood of the moment, was a clever play on Boris Nemtsov’s first name.  Something my friend Tamara calls “a linguist’s dream.” 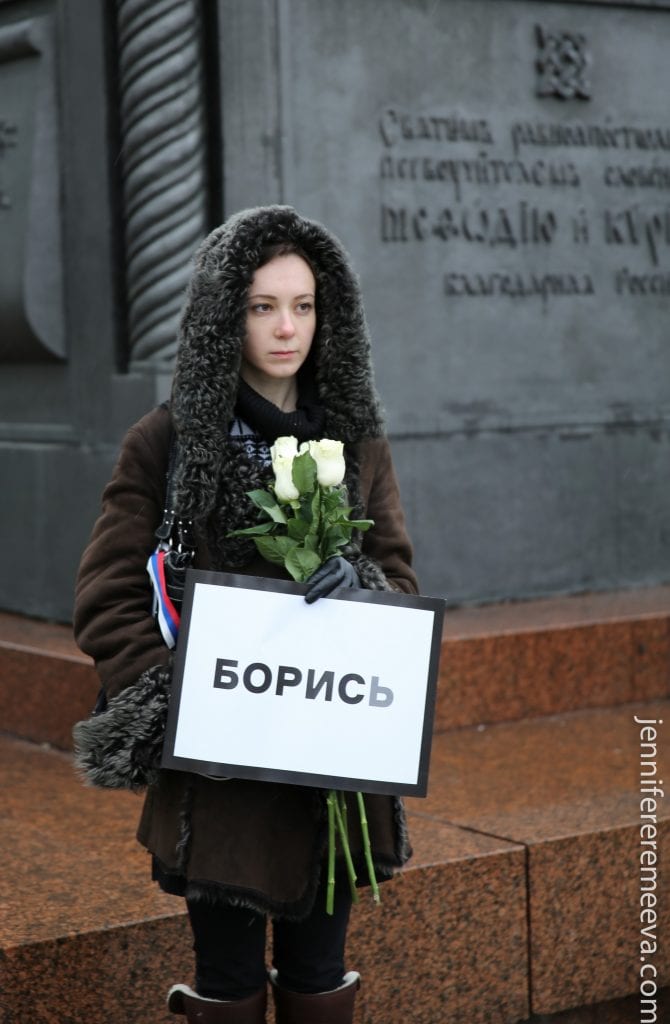 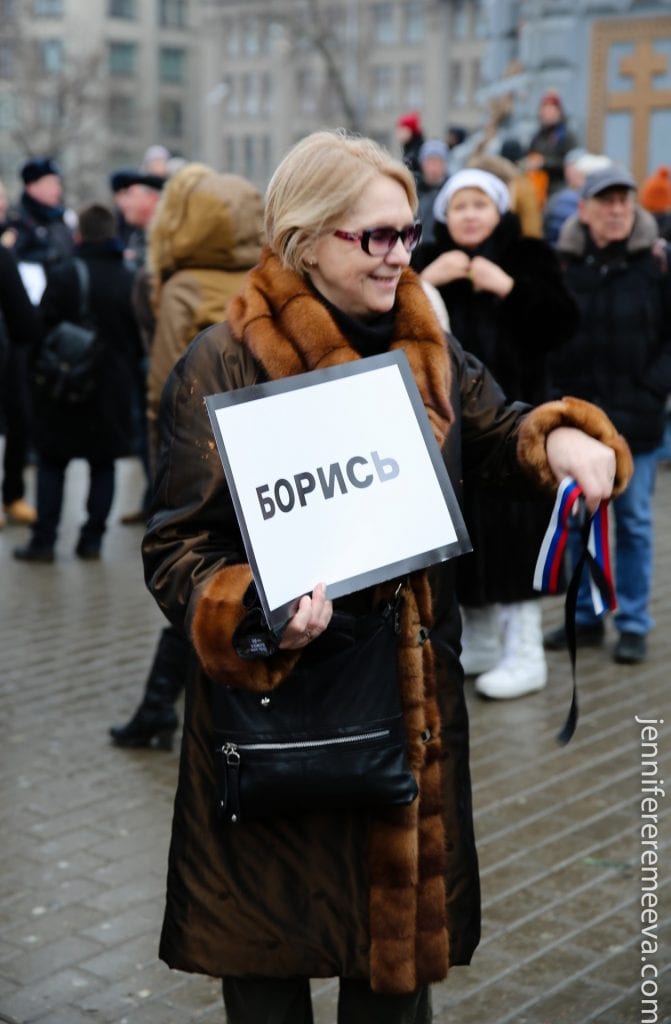 “Struggle” was a popular slogan at the Boris Nemtsov memorial march. In Russian, this is a clever homonym of Nemtsov’s first name. 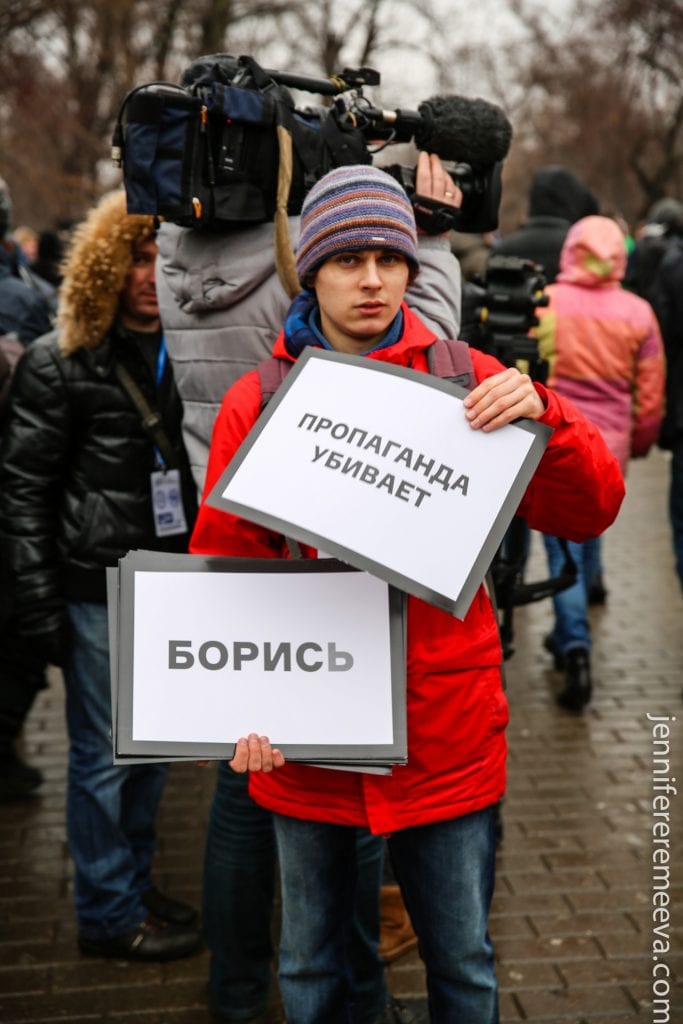 “Propaganda kills” was a popular slogan, as was “Struggle” (below), which was a play on Mr. Nemtsov’s first name. 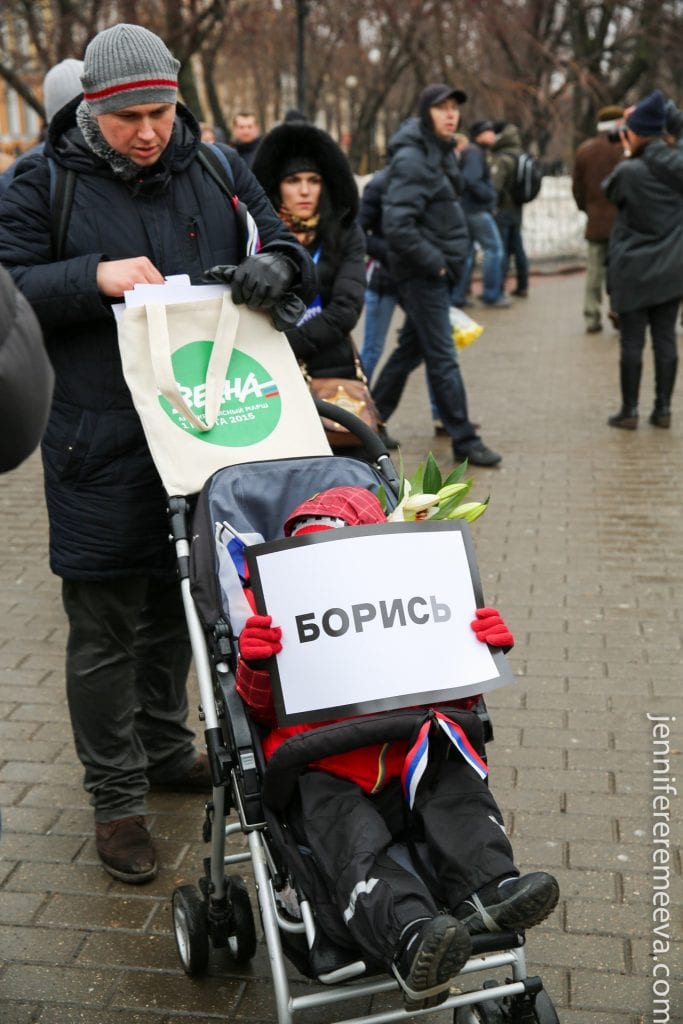 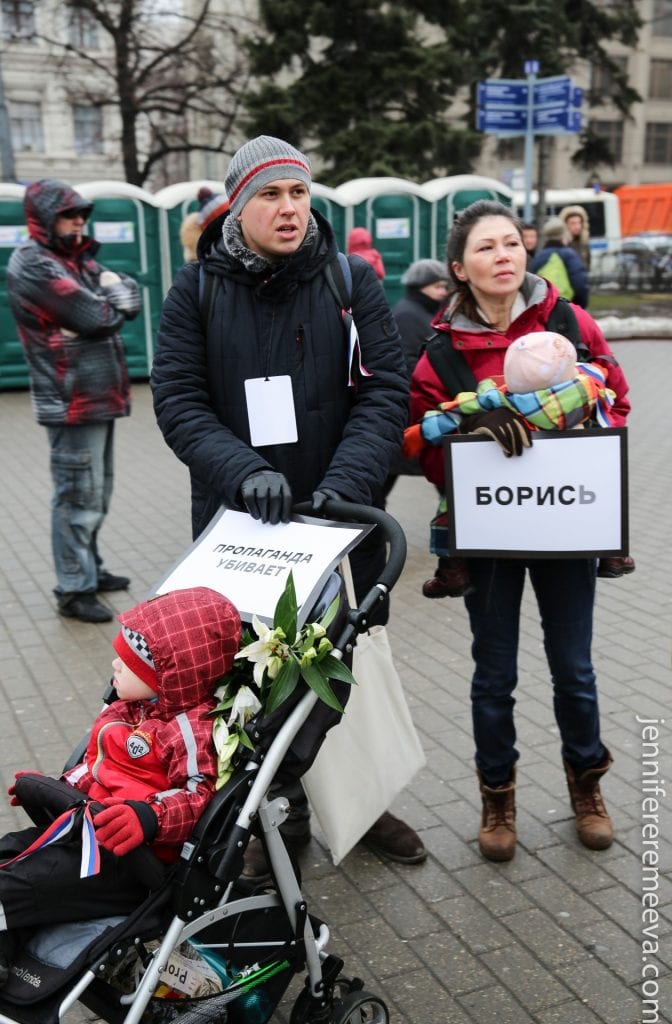 “Propaganda kills” (right) was a popular slogan, as was “Struggle,” (left) a clever play in Russian on Mr. Nemstov’s first name.

“Very, very, very clever,” I said, and explained it to Lisa.

“БОРИСЬ ” (pronounced “bor-ees”) is the third person singular imperative of the verb “to struggle” or “to fight against.” It is a homonym of Nemtsov’s first name, Boris.

For the linguists amongst you:

As a branding slogan, it ticks all the boxes: a simple and effective statement summing up a man who spent much of his life struggling and fighting for reform. As a branding message or mission statement, it offers those who survive Boris Nemtsov a very clear call to action.

We will watch with interest to see what the opposition does with it.

For more images of the memorial march, click here.

There were so many excellent pieces about Nemtsov over the past few days, which I will list in my newsletter later this week, but I felt that one of the best summations of Nemtsov’s life and work was done by Brian Whitmore of RFERL.org on his incredibly informative Daily Vertical video log on Tuesday. If you are interested in learning more about Russian politics, be sure to subscribe to Brian’s authoritative weekly Power Vertical podcast.

Dear Readers,
What a very sad thing this is. It was no week to be a humorist in Russia. I was interviewed on WDEL about Boris Nemtsov and the march, and I noted that for those of us who have been in Russia since before the flood (circa 1991), Nemtsov was just always there, somewhere on the political canvas. I confess that the last few days have made me feel old, tired, and more than a little bit downcast. Nemtsov in his khakis and blue blazer was a symbol for all the expectation my generation had for post-Soviet Russia. Recent years have seen that enthusiasm dim, to be sure. We’ve all become more cynical about the fact that we may not be a part of sweeping changes, but Nemtsov has taken something with him that I can’t quite put my finger on. Not hope exactly, but something like it. The tiny flicker of possibility that all of this may someday come to an end and something more uplifting may take its place.

I was struck by the fact that almost three years to the day, I was out in Moscow with my camera at another protest: the Big White Circle, which was the last gasp protest by the opposition before the presidential election of 2012. What a different mood, and yet, I was pretty sure that through my  lens, I saw some of the same people.  To re-visit that event, click here.

I know many of those who read this may have met or encountered Nemtsov, so I urge you to share your thoughts, memories, impressions of events, and thoughts about the future by hitting the comment button below.