Vodka and Me: The Reset Button 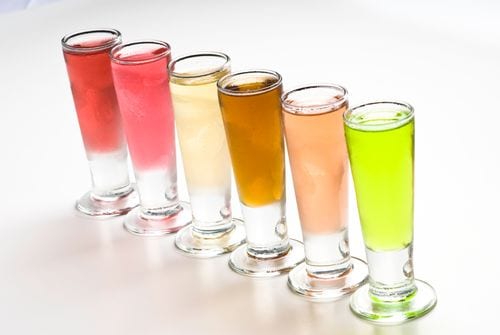 I was taken aback last month when a reader wrote to ask me if bacon-flavored vodka is as popular in Russia as it is in her part of the world:  the Southern United States.

I’ve never been a big vodka fan, which is probably the reason I am still alive after twenty years in Russia, where vodka is a way of life.  I’m more of a gin or chardonnay gal, but the idea of bacon-flavored vodka, and what a basic Internet research revealed to be its unquestioned popularity, forced me to take another look at vodka and experiment with its seemingly endless possibilities.  Flavor infusion has helped vodka and me hit the reset button!

Since the Poles first brought vodka to Russia in the 8th Century, the clear, strong, largely flavorless beverage has been the liquor of choice to accompany both the lavish banquets of the Tsars as well as the simple fare of Russian peasants.  In the 18th Century, Catherine the Great granted distillery rights to select members of the aristocracy, who vied with one another to produce the purest and most sophisticated brands of vodka, as well as flavored versions which, as Moscow’s Vodka Museum points out used, “all the letters of the alphabet…cherry and pear, blackberry and acorn, caraway seed and dill, bird cherry and sage!”

Vodka, then, is a blank culinary canvas on which the creative cook can paint almost any flavor by infusing fruit, vegetables, herbs, spices and yes, even bacon.   Infusion is a simple process which combines a flavor component with any liquid at a specific temperature for anywhere from four hours to four weeks (depending on the properties of the component.)  Vodka is particularly suited to infusion because of its odorless clarity and high alcohol percentage.

Summer is the perfect time to start experimenting with flavored vodka, particularly in Russia where vodka is always cheap, and the bounty of summer floods the market with fresh berries and pungent fresh herbs.   Flavored vodka is not only delicious on its own: chilled in a simple shot glass, or as the basis of imaginative mixed drinks; but it also adds wonderful flavor to soups, risotto, stews, and makes a marvelous marinade to meats, poultry, and fish, and are a great accompaniment to traditional Russian summer staple of shashlik.

Here are some of my favorite infused vodkas, and the foods they match to perfection!

This is ideal for mixed drinks, a marinade for fish and chicken, or on its own to accompany Asian food.  I serve this with sushi and spring roles for an innovative, light appetizer.

1.Wash and sterilize a one liter bottle or jar with a non-metal lid.

2.Using the back of a spoon or the smooth end of a meat tenderizer, gently crush the ginger slices to release their essential oils.

3.Combine the ginger slices and vodka in the jar or bottle, shaking lightly to combine.

4.Place the mixture in the freezer for 5 days.

6.Sieve the mixture through a coffee filter or fine mesh colander.

This vodka infusion pairs wonderfully with lamb chops, poultry, and grilled vegetables.  Combined with extra virgin olive oil, the vodka does well as both as a dipping sauce or marinade, or drizzle it over goat cheese, to add a wonderfully fresh flavor component.

One bunch of fresh thyme

1.Carefully remove the thyme buds from the stems.  Wash in a salad spinner and pat dry on paper towels.

2.Wash and sterilize a glass jar with a tight, non-metal lid.

3.Gently crush the dry thyme buds in a clean mortar and pestle and place in the bottom of the jar.

4.Pour vodka over the thyme buds and gently shake to combine.

5.Cover with lid and place in a dark location at room temperature (no warmer than 20°C).  Allow to steep for up to three days; periodically shaking to ensure the vodka absorbs the thyme flavor.

6.Strain vodka through a coffee filter or fine wire mesh with cheesecloth.

I combined these two flavors, which go wonderfully together, for a delicious pairing for Middle Eastern meze:  hummus, baba ganouch, and tabouli!

Zest of one lime (be careful to remove only the green rind and not the inner white part of the rind.

5-Tbl of lightly toasted coriander seeds, crushed in a mortar and pestle

1.Combine lime zest and coriander in the bottom of a sterilized glass jar or bottle with a non-metal top.

3.Let the mixture steep for four days in a dark area at room temperature (not warmer than 20°C).  Do not steep for more or the lime rind will make the vodka bitter.

5.Strain the mixture through a coffee filter or a fine wire mesh with a piece of cheesecloth.

6.Return the mixture to the dark location to age for approximately 30 days.

This article was first published in French under the title “La vodka se reinvente pour les gourmets,” in La Russie d’Aujourd’hui on June 15, 2011.  A link to that original article may be found here.

Want to know the secret to bacon vodka? You know you do!  Leave a comment below and I’ll send it right along, along with some creative ideas on how to use it (and not abuse it!)  Don’t knock it ‘til you try it – it makes a mean Bloody Mary, and has a truly phenomenal flavor!