There are two ways to make Russia’s oldest soup, ukha. 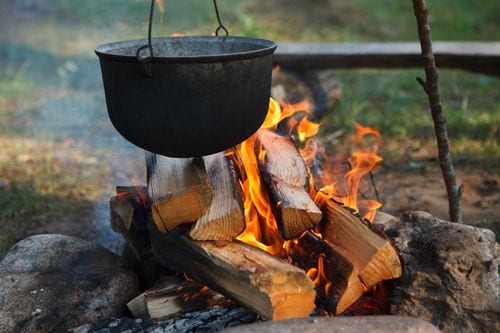 The first way (and the way I first experienced it on the shores of Lake Baikal in 1990) goes like this: catch a fish in a crystal clear lake or river.  Throw it into a kettle of the crystal clear water and boil until the eyes pop out.  That’s how you know it’s done.  Consume immediately.  And that’s it.

Which is fine if you happen to be on the shores of a crystal clear river, know how catch a fish, and can make a fire in the wilderness.  But if one of these prerequisites is missing, fear not!   You don’t have to go all the way to Siberia, learn to fish, or even work up the courage to deal with a fish eye.  It is, however, a good idea to make friends with your local fishmonger, if you haven’t already, for help in sourcing the freshest fish possible for your version of ukha.

Ukha has been around for centuries, and like all Russian dishes, has changed and adapted in the kitchens (and riversides) where it is prepared.   Ukha comes from the word “ukho,” the Russian word for ear, which is odd since fish don’t have ears.    Ukha originally had nothing to do with fish, but was rather a thick, rich stock made from the leftover parts of cows and pigs, including the ears, the feet, the sinews, and other trimmings.   The word ukha became synonymous with “bouillon” and ultimately with the simple broth and fish soup popular with both peasants and nobles alike.

Chucking fresh fish into boiling water is not so much a recipe, as a method of cooking, but ukha was re-imagined and tweaked throughout the centuries.  At the Tsar’s table, “amber” ukha, redolent with precious saffron strands, was made with perch or sturgeon.  The French chefs working in Russian noble kitchens concentrated on perfecting the flavor and appearance of the bouillon itself, clarifying it with egg whites and eggshells and experimenting with different kinds of fish.   Some Russian chefs insist upon the addition of potatoes and root vegetables, whilst others vehemently protest that anything but fish and water make the concoction no longer ukha, but genertic fish soup.  I’ve heard violent arguments about whether or not to add lemon slices, and some heated discussions as to how many different kinds of fish you can use for ukha.  There are many fish in the sea, and many recipes for ukha.

So, if you are not bound for Siberia, or if you aren’t an accomplished reelsman or woman, but you’d like to try ukha, a recipe culled from numerous stories, cookbooks, advice from Russian fishermen, and a little sage input from my friend the fishmonger follows:

2 liters of Fish Stock (recipe below)

½ of a parsley root or turnip, cubed (2 centimeter pieces)

2 leeks or one large yellow onion

Lemon slices (if you dare!) for garnish

1. Sweat the leeks or onions in oil in a heavy bottomed soup pot on moderate heat.

2. When the leeks and onions are soft and translucent, add the parsley and celery root cubes and sauté until tender (5-7 minutes)

5. Add the fish, poaching it lightly at low heat for 7-8 minutes.

7. Serve immediately.  Russians traditionally serve ukha with rastigai or fish pies, and it is the traditional accompaniment to Salmon Coulibiac.

I am a great believer in fresh stock made from natural ingredients, which is far superior than prepared and processed cubes or tinned broths, which introduce too much salt and a chemical taste that has no place in a fresh soup like ukha.  Whenever possible, take the time to make fresh stock, and while it isn’t essential to clarify it, nothing looks better than a clear, sparkling broth to showcase the delicately poached fish and the brilliant green garnish.

2 fish heads, gills and eyes removed (here is where your friend the fishmonger can be so helpful!)

Trimmings of fresh herbs (keep these in a plastic bag in the freezer): parsley, dill, scallions, tarragon etc.

1. Place all the ingredients except the eggs and eggshells into a heavy, deep-bottomed stockpot.

2.  Bring to a boil, reduce heat, and simmer on low heat for 1 hour, skimming the surface of any scum, which has accumulated.

3. Remove from the heat.

4.  Line a colander with fresh cheesecloth or a clean linen kitchen towel and strain the bouillon into a clean stockpot.

At this point, you can stop, but if you wish to clarify the stock, proceed as follows:

1. Replace the stockpot onto moderate heat and bring to a simmer.

2. Whisk the egg whites together with one cup of the hot stock and then pour the mixture into the stockpot.

3. Add the crushed eggshells and stir for four minutes.

4. Reduce heat and slide the stockpot to the left so that only the left third of the pot covers the burner and let simmer for ten minutes. As the egg whites cook, the cloudy matter of the stock adheres to them.

5. Rotate the stockpot around to allow the other side of the pot to cover the burner and let simmer ten minutes.  Do the same to the top and bottom of the pot, taking care that the stock does not boil over.

6. Remove the pot from the heat.   Line a fine sieve with cheesecloth or a clean linen dishcloth over a tall stockpot.  Ladle the stock and egg mixture carefully through the sieve, taking care that the bottom of the sieve does not touch the clarified stock.

This article first appeared in french under the title “Oukha, la mere des soupes russes.” in Le Figaro and La Russie d’Aujourd’hui on May 16, 2011.  A link to that online article can be found here.

Sorry for the radio silence, but it is not an indication of a lack of interest in blogging!  We’re working hard on a major overhaul: introducing new material, launching a new blog and all kinds of new and interesting developments!  So stick with it!

Question to the cooks in the group:  what other Russian recipes interest you?  Been longing to make something you read about?  Log in and let us know and we’ll plan some new columns around it!