I am a culinary schizophrenic. 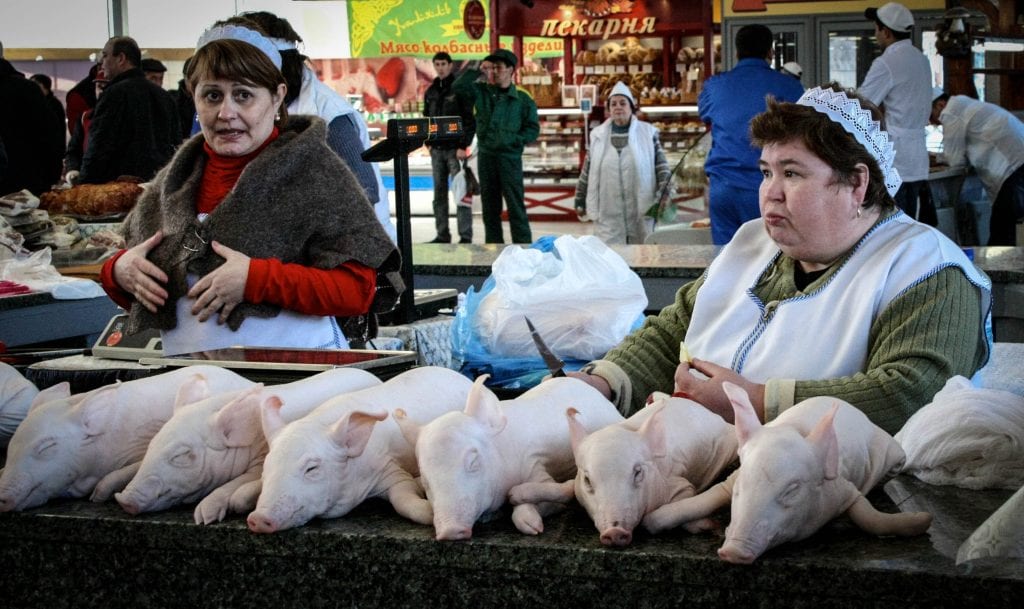 I spend half my time in the messy and energetic Russian capital and the other half in Northampton: the politically correct epicenter of the galaxy, nestled in the heart of the bucolic Pioneer Valley of Western Massachusetts.  I designed this division of time to become a saner human being, but it has completely backfired.

“Have an olive,” I urge Vladimir over drinks in Moscow, “they’re from Spain.”

“Have some hummus,” I invite Caitlin at a poetry reading in Northampton, “the chickpeas were grown three miles from here in a humane solar-powered greenhouse co-operative.”

In Northampton, any invitation involving food necessitates sending out the following code, “Do you or your partner have any food allergies?” This reveals the extensive list of banned substances.  Your guest responds: “We eat everything, except of course red meat, caffeine, chickens, and eggs from non-local humane farms outside a six-mile radius. No alcohol, of course…no sugar, obviously, and oh, no farmed fish, or processed dairy.”  Which leaves a gourmand like me almost nothing to work with.

Which leaves a gourmand like me almost nothing to work with.

Contrast this with a recent exchange in Moscow:

In Northampton, everyone is a passionately committed locavore, consuming only that food which is humanely grown within biking distance of her own front door. Even the garbage collectors in Northampton go around on bikes.   Imagine chickens being tucked in at night, and you aren’t far wrong.   Ground Zero for Northampton locavores is the Tuesday farmers’ market known simply as “Market.” When I first moved to town, I was totally fired up for “Market.”   I bought the tote bag and hid my car in the adjacent multi-storey car park, doing what I hoped was a credible imitation of someone who biked everywhere.  I felt sure the sisterhood of writers, poets, yogis, and fascinating friends I planned to make would all be there.   Two hours (and a desperate trip around the corner for some locally-made rum raisin ice cream) I reluctantly concluded that “Market” was great if you wanted to live on kale salad.  I didn’t.

I feel curiously off the hook somehow when I return to Moscow, where even the most committed Northamptonite would be forced to agree: you can’t subsist on a diet of local beets, sour cream, and cabbage, and you’d lose face if you tried.  It’s all about imports here in the Big Potato—a sushi bar on every street, a German beer in each refrigerator.

Nothing in Moscow is easy, though, and shopping for imported food at a decent price is an all-day contact sport necessitating stamina, my wingman Tolya-The-Driver, the gas-guzzling Land Rover, and a full water bottle.  Our objective: a large, wholesale cash-and-carry warehouse, catering mainly to restaurants, called METRO, where $100 gets you more than three items.  Cash is king here, so I secure a wad of 1000 RUR notes from HRH, tuck them carefully into a money belt, don my most comfortable shoes and dress in layers that can be removed as needed.

Oh, the thrill of METRO!  Much harder work than “Market,” but infinitely more satisfying.  I feel like a mighty Neanderthal hunter-gatherer, forging through the jungle of Leningradski Prospekt, stealthily sneaking the re-usable shopping bags (no five-cent discount for using these at METRO) past the watchful eye of the armed security guard, and stalking my prey.

List poised, I push the oversized, lopsided trolley around, parking it strategically at the end of an aisle blocked by surly staff re-stocking with their forklifts.  On goes my coat for a plunge into the chilly meat room:  Lamb chops from Wellington, chicken breasts from Lille!  Forward to the Dairy Annexe for Finnish milk and Swiss cheese.  Spanish anchovies in olive oil, and real cornichons from France, not Bulgaria!  Momentary confusion in the spice aisle: why so very much allspice and no cumin?  Alas, this day is not a complete retail slam-dunk: no Australian wine, but compensation looms in the form of Greek melting cheese and Israeli limes.

Once the bounty is safely stowed in the back of the Land Rover, Tolya and I celebrate with some local fare:  Quarter Pounders with cheese, from the Avto-Mac, made from beef raised just outside of Moscow.  We don’t want to be accused of not supporting local food producers or anything.

This post first appeared as an article in Russia Beyond The Headlines and The Washington Post on February 22, 2011.

Do you get embroiled in the “it has to be grown within a bike ride away from you” stuff?  Did you read “The Poser” where the narrator comes across a woman sobbing in a Seattle grocery store because she can’t find artisan cheese to take to her Nursery School’s snack thing…only something from Madison, WI?  Hilarious.  Alternatively, do you live in a place where everything is imported?

Hit the comment button and let us know how your shopping plays out each week!