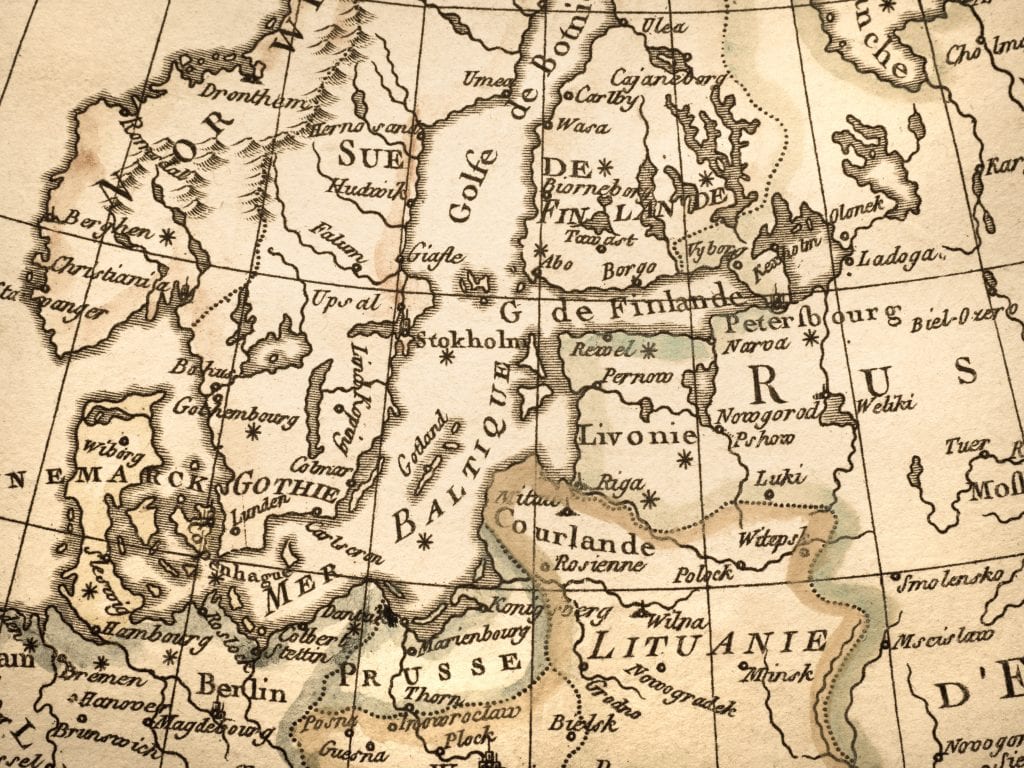 The oldest of Russia’s naval fleets was founded by Tsar Peter The Great, himself as part of his Herculean efforts to secure a “Window on the West” for Russia.  On this day, in 1703, Peter led his troops in a naval victory against two Swedish battleships, and thereby secured the strategic mouth of the Neva River, where he went on to build the naval city of his dreams, St. Petersburg. 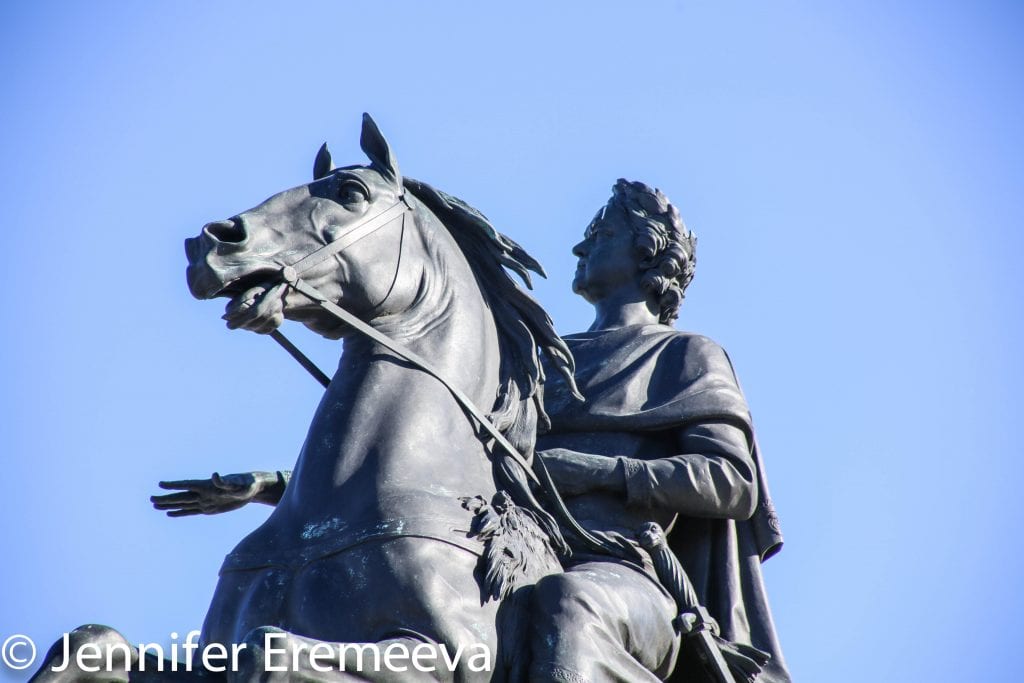 The Baltic Fleet, like the Black Sea Fleet, has a sticky wicket in terms of the territorial waters it defends, a historically complex relationship with its near-neighbors, and, of course, the base question.   One Baltic Fleet base is in Kronstadt, and the other in the Russian enclave, Kalingrad.  Kronstadt has the advantage of being cozily tucked deep into the Gulf of Finland, and Russia’s second city, St. Petersburg has its back. Kalingrad, formerly German Konigsberg, on the other hand, is handicapped by being the lone blueberry in a NATO muffin.

And thus he mused: “From here indeed

Shall we strike terror in the Swede,

And here a city, by our labor,

Founded, shall gall our haughty neighbor;

“Your window through on Europe: stand

Firm-footed by the sea, unchanging!”

The Kaliningrad question has been in the news a lot.  Short history lesson may be in order: Soviet troops captured Konigsberg from the Germans in 1945 at the end of The Great Patriotic War and renamed it “Kaliningrad” after a prominent Bolshevik.  In 1991, Latvia, Lithuania, and Estonia said “Thanks, but we’ll take it from here,” which meant that Kaliningrad was cut off from the rest of newly forming Russia. Then those crybaby Baltic States and that wimp Poland went to hide behind NATO’s skirts, which meant Kaliningrad was more than just mildly logistically difficult.   Every time the US talks about putting missiles in places like Poland “to fight terrorism in the Middle East,” Russia drops a hint (thud) that Kaliningrad would also make a nice place to stick a few warheads.  Kaliningrad is a special economic zone, but some of the Kaliningraders feel they might have more fun being part of the EU.

A few years ago, my friend Jack, who goes to Russia frequently for business, was being held hostage at a long liquid lunch in St. Petersburg with some tourism types.  This happens to Jack a lot, and not having much of a head for liquor, he was tuning out, letting his local representative do the heavy conversational lifting, until he vaguely noticed that the conversation kept including a funny word he’d not heard before, which sounded like the syllable “nat-“ (as in “fat-“ “cat-“ or “rat-“) and then “oh.”  Nat-OH.  Jack first thought it might be a newly opened summer palace, which, as far as he was concerned, are all unpronounceable:  “Gatchina,” and “Orianbaum,” Forchrissakes, or the ultimate tongue twister, “Tsarskoye Selo.”   But that didn’t seem right, because the battleaxe he was lunching with kept saying things like,

“But you know that nat-oh has absolutely no right…”

“And you know, nat-oh never ratified..”

“Perhaps,” thought Jack, “it’s a new hotel and they haven’t got the price points we need.”  That seemed plausible:  God knows most St. Petersburg hotels were both overpriced and unpronounceable – after 25 years he still couldn’t say “Pribaltiyskaya,”  “Pulkovskaya,” or “Oktyabrskaya,” and, really, he thought, why on earth should anyone want to try?

“Putin is having all kinds of trouble with nat-oh,” said the Battleaxe.

“A-ha,” thought Jack, relieved he’d at last got the right end of the stick, “it’s a tourism ministry thing.”   He prepared to jump into the conversation, when his interlocutor said, bafflingly,

“And then there is the question of Kaliningrad.”

“Kaliningrad?” thought Jack, wildly, downing another shot of Stolichnaya in an ill-advised attempt to achieve some clarity, “Where the hell is that?”  Then, because he’d been on 461 city tours of St. Petersburg, he recalled that St. Petersburg had been called Leningrad from 1924 – 1991, (well, that’s not what Jack thought…but I’m supplying the correct information) and as The Battleaxe paused to take in another lungful of air, he interjected what he hoped was an overdue intelligent observation.

“I find it interesting that some people still call it that,” he said affably,

The Battleaxe leaned over and slammed her fist down on the table, making the silverware dance, and the crockery rattle.  Sour cream splashed onto the tablecloth.   Jack sighed, thinking that much – perhaps too much — of his professional life had been spent in a semi-alcoholic-induced stupor, sitting across the table from Slavic battleaxes from the tourism industry who rested their titanic bosoms on the shelf of a groaning lunch table, and banged on the grease-stained tablecloth to make some emphatic point the vodka kept him from fully understanding.  Perhaps, thought Jack, it was time to begin to contemplate partial retirement.

“We are not giving it back!” she shouted, “No matter what nat-oh says!”

“Golly,” thought my friend, “this new tourism ministry is even more powerful than the old guys.”

“But who would you give it back to?” asked Jack, searching his memory for a sketchy understanding of 18th Century Russian history.

“The Swedes,” asserted Jack’s local St. Petersburg representative, who had much more of a head for lunchtime drinking and had been following along with a certain amount of wicked amusement.

“NATO,” said the local rep, making it rhyme with ‘Plato,’ and kicking Jack under the table to silence him.   “You have to keep your eyes on them at all times.”

To Vice Admiral Viktor Nikolaevich Mardusin, and all those who serve with him – many congratulations on the birthday of the Baltic Fleet!

Thank you so much for stopping by on Baltic Fleet Day!  Is it part of your job description to have too many cocktails at lunchtime?  What’s your strategy?  And, does anyone know why Finland hasn’t joined NATO yet?  That seems silly…