The Adagio of a Reluctant Pony Mom

Is there anyone in the galaxy who hasn’t yet weighed in on The Battle Hymn of the Tiger Mother? 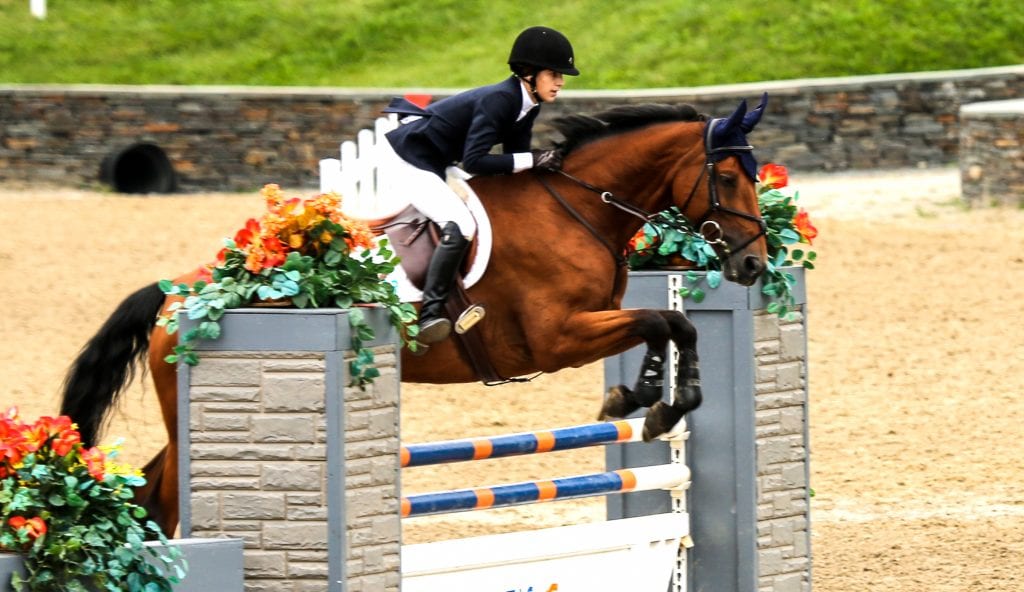 My 13-year old daughter Velvet is a most accomplished rider…or jumper, or is it Hunter?  Maybe it’s eventer?  Or eventress?  I’m not sure, but she is exceptionally good at riding a horse.  She can jump something like three feet.  Or is it four?  She’s always coming home with blue ribbons, or long “Reserve Champion” rosettes, and all manner of glassware, tea towels, trophies, and medals.   Velvet is already on the fast track to something that I’m told happens in Madison Square Garden, and the Olympics have been mentioned as a realistic goal.

Everyone wants to know how I, who seldom take on anything that I can’t do in my pajamas, managed to produce such an athletic prodigy who excels at one of the world’s most elite sports.  No one believes me when I just shrug my shoulders and say, “Honestly: I did nothing.”  I can tell they don’t believe me.  If these other pony moms had any imagination, they might wonder if Velvet is the natural daughter of a Cossack Hetman or The Duke of Right.  The truth, of course is far more complicated: I really did do nothing.  Velvet is a typical product of successful “indifferent parenting.”

This is the way I was raised, by two WASPs, who came of age about six months too early to be full-blown hippies.  They took great care never to expose my sister and me to anything in which we could win a medal – of any kind.  “Field Hockey…hmmmmm” said my mother pursing her lips, “Why don’t you go out for Big Chorus?”   Their primary concern throughout our childhood was that we never got invited to enough sleepovers. After dinner each evening, everyone dispersed to his or her own part of the house without a lot of detailed chitchat as to what would happen there.  I assume we did our homework at some point because, before you knew it, despite my mother’s tears and protests, we were both packing our trunks for really good prep schools, from which we both matriculated to the Ivy League.

“Darling,” said one of my mother’s friends (Concerto of the Upper East Side Piranha) through gritted teeth, “You never seem to push your children, and yet…somehow they end up doing, so well…”

It worked for me. Primed by constant parental assurance that the fusion of Glee Club, AP Latin, “Most Improved JV Soccer player, and a backstage solo in “Jesus Christ Superstar” was exactly the skill set that prepared one for The Real World, I was ready to be a model of indifferent parenting myself when Velvet started to display a single-minded determination to excel.

“Leave this to me,” I said to my Russian husband.  We had a deal:  I called the shots on education, food, clothing, travel, and thank you letters and, in return, Velvet was baptized in the Russian Orthodox Church.

“Hey, sweetie, why don’t we have six or seven of your friends over for a sleepover?” I said when she was eight, “They can all come home on the bus with you.  We’ll get some videos, maybe do some ice-cream sundaes.”

“Mommy,” Velvet reproached me, “I’d have to miss riding.”

When she wanted Breyer horses, I gave her an American Girl Doll.  In a counter offer to her plans to spend twelve to fourteen hours bailing hay as unpaid slave labor at the barn, I suggested a two-week Shakespeare camp or an experimental Quaker farming co-op.  I forced her to go to Cape Cod for the last two weeks in summer, and St. Croix over Christmas, during which time I refused to even discuss the idea of riding.  When she wanted to up her lessons from three to six days a week, I sat her down for a serious discussion. 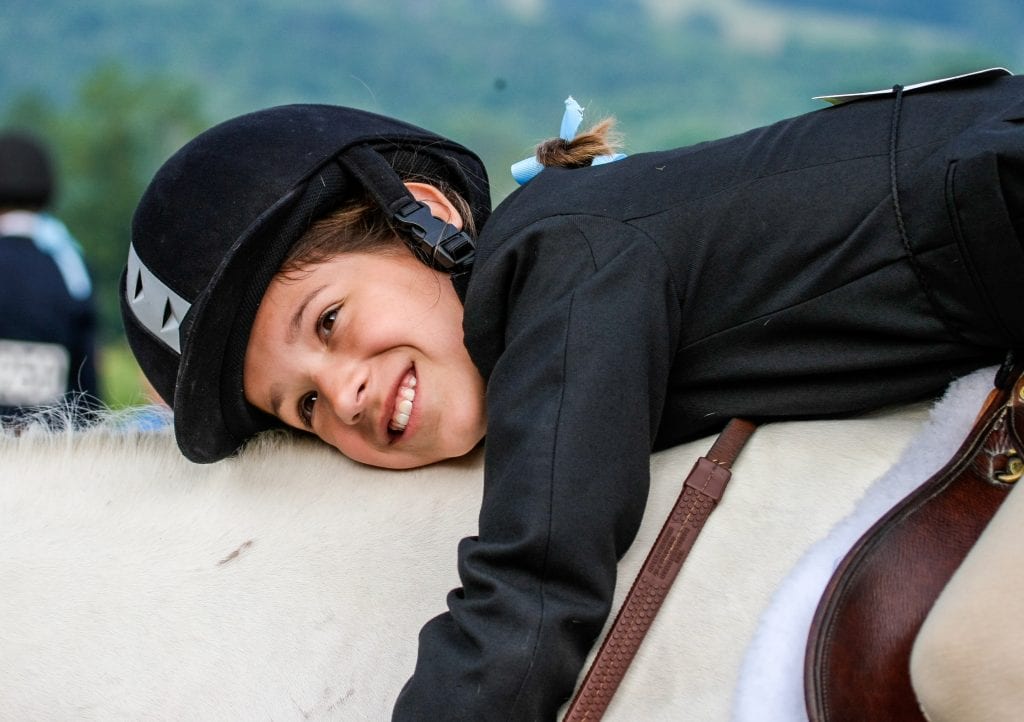 “Velvet,” I said sternly,  “There is such as thing as overkill.  Get too good at this, and you’ll end up fox hunting or steeplechasing, and that will be no fun at all, trust me.  Just try to relax and enjoy it.”

Velvet spent most of her leisure time working on a tricky thing called a “lead change.” She set up a jumping course in the living room out of upturned coffee tables and couch pillows, and then taped the complex pattern onto the flat screen. Hour after hour, she galloped around the course on a hobbyhorse.  “Velvet,” I said one afternoon, peeling off the pattern from the TV,  “you’ve been at that for forty-five entire minutes…enough already. Put the couch back together, and we’ll download ‘30Rock.’”

“Mommy,” she rejoined, “I have to do this for at least three hours, or I will never get it right.”

During the long, hot summer months, Velvet went on the show circuit, garnering blue ribbons by the bucketful.  While the die-hard pony moms crowded each other at the rail yelling, “Get your heels down/pull your shoulders back/pull him up/push him over,” I hid behind “The New York Review Of Books” and sloped off in search of “ice for the cooler,” hitting all the antique stores in town on my way back.   Rather than insisting we stay an additional three hours so she could get in another go at “Maiden English Pleasure” (which to me sounded like a Victorian soft porn film), I took to establishing firm escape clauses such as “Aunt Nancy is coming for dinner,” or “I’m on deadline.”

“You didn’t really mean to tell Velvet that horses don’t feel human emotions,” placated one of the more sympathetic moms after I’d had a mini meltdown swinging in to the tenth hour of a hot and humid horse show in North Nowhere Vermont.

“Oh yes, I did!” I told her, as all the moms picked up their hoof picks and edged away from my little island of sanity made up of cooler, folding chair, and a stack of magazines. “And I’ll tell you something else: that trainer needs her head examined if she thinks making “good luck” cards for those animals is time well spent.” 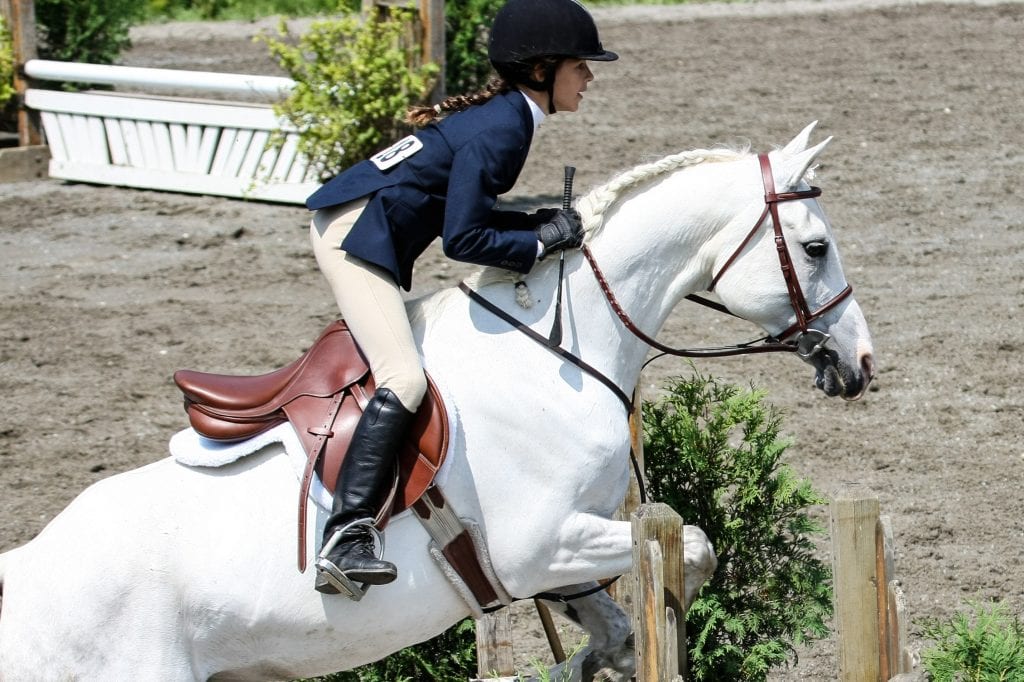 Resolute, I refused to buy a horse, standing my ground when my husband waivered.  I made Velvet learn to read and use EXCEL to create and balance a budget from the scarily expensive “Dover Saddlery” catalog before I sanctioned the purchase of $200 dollar jodhpurs and something super necessary called “half chaps.” I insisted that she OXYCLEAN her own breeches and iron her show shirts. I made it clear that I was never, ever going to haul anything behind my Subaru and certainly not a horse trailer. I categorically forbade my mother from learning to braid a mane or tail.   I developed an extreme allergy to horsehair and hay, producing notes from doctors to prove it.

It’s been a winning strategy for Velvet, who is, as I mentioned, on track to the Olympics.   Kudos to me! Thanks to the hours that I have spent trying to distract her from the relentless pursuit of excellence, she’s achieving it.   The hours I’ve clocked, wedged between the Scylla and Charybdis of pony moms, unapologetically resisting their patient attempts to teach me the difference between “over saddle under fences” and “hunter jumper” have paid off:  Velvet is a self-made athlete, and her success can be attributed completely to her.  What parent doesn’t want that sense of achievement for her child? After all, it’s nothing I did.  Parental indifference – the Western child’s ticket to greatness!

Jennifer Eremeeva is a free-lance writer, blogger, cooking and humor columnist, and passionate horse show Dodger based in Moscow.