Olia Hercules’s Mamushka is taking the culinary world by storm.  Here’s why. 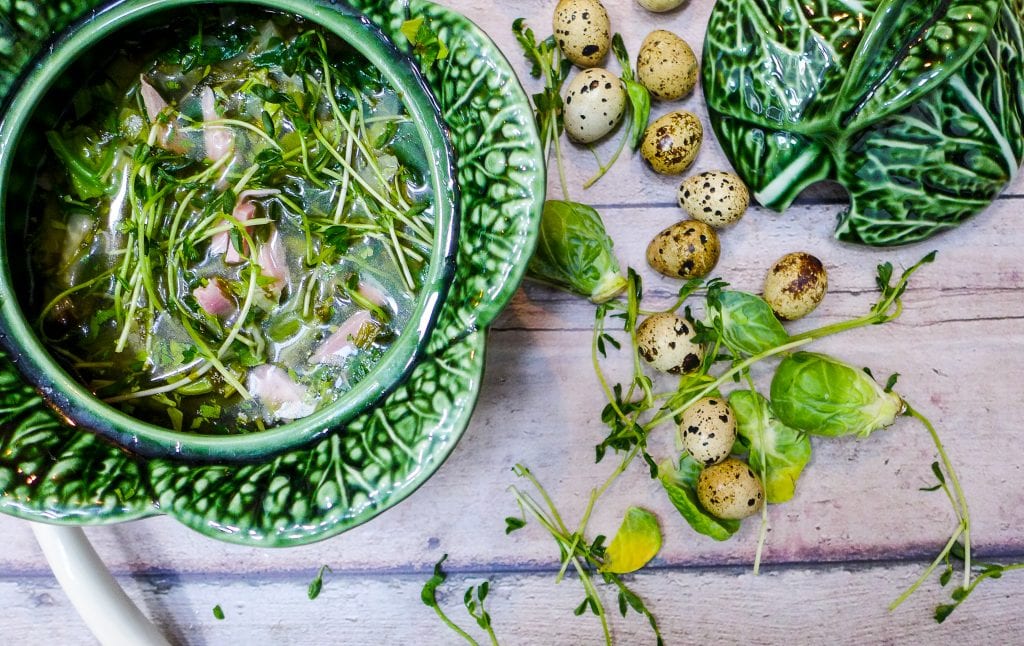 Summer Borscht with Duck inspired by Olia Hercules and Mamushka

About a year ago, my friend and fellow Russian foodie, Katrina from the London-based event management group, Russian Revels confessed to me that she felt Eastern European cuisine was on the verge of being the new big thing.

I confess I was skeptical.

“Really?” I said, as we prepared for The Great Mayonnaise Debate in London.

“Think about it,” she said animately, as she spayed Russian pickles on Borodinsky bread with gold paint — one of Russian Revels’ signature party dishes. “Polish is the second most popular language in London right now. I’m telling you, this time next year, Peruvian food will be a thing of the past…it will all be borscht and vareniki.”

With the publication of Mamushka by rising culinary star Olia Hercules, however, I’m having to eat my words…and a lot of borscht too. There can be no more tangible evidence that Katrina was on to something than the publication of this marvelous new addition to the all-too-slender canon of Eastern European culinary tomes. It was one of those hotly anticipated releases that I simply wasn’t prepared to wait for: I paid extra postage to have a hard cover copy shipped from the UK, and I’m not sorry. I spent a happy few hours thumbing through Mamushka which features marvelous food photography as well as delightful commentary and superb regional recipes.

Olia Hercules is Ukrainian by birth but now a British national. She received classical training in the UK and worked with the renowned Yotam Ottolenghi in his kitchens before becoming a food stylist and recipe developer. But with Mamushka, Hercules has gone back to her culinary roots in Ukraine and the recipes she and her family enjoy.

Recipes from Ukraine and Beyond

Hercules’s Ukraine, one hastens to point out, is the lush south of the region on the Black Sea coast and all the marvelous—almost Mediterranean— flavors that this bountiful region implies. She’s comfortable crossing the nearby borders into Russia, Georgia, Azerbajian, and Armenia for inspiration, which is as it should be since recipes in this part of the world are very much a fusion of different traditions, cuisines, and ingredients. Fresh herbs take center stage in the recipes of Mamushka, as do rich dairy products, organic meat, and all the vibrant colors of seasonal berries, fruits and vegetables. Mamushka is an excellent summation of a dual trend, which has been gaining momentum for the past three years in Eastern Europe: the enthusiastic revival of traditional recipes interpreted with modern cooking methods and some international ingredients.

Much of the success of Mamushka lies in Hercules’s appealing writing style. She is eminently comfortable with her material, and her recipes are easy to follow. She wisely suggests substitutions for regional specialties such as suluguni that can frustrate any aspiring chef located outside the borders of the Former Soviet Union. She also encourages her readers to riff on her recipes, an essential element in all the best cookery classics.

I had Mamushka in the front of my mind recently as I wandered around Leningradsky Market searching for some weekday inspiration. Both HRH (my “Handsome Russian Husband”) and I are crazy busy at the moment, so we’ve been doing very simple dinners that can be assembled quickly and without a lot of fuss. Batches of fresh sorrel and young beet greens gave me my cue and I remembered being intrigued by Hercules’s version of summer borscht with duck. This is a marvelously flavorful interpretation of a classic “shav,” which is made even more delectable by the addition of hardboiled quails’ eggs and a dollop of Eastern Europe’s “white gold,” thick rich sour cream. I added pea shoots, shredded Brussel Sprouts, and parsnips, but as Hercules says, you can come up with your own version!

Readers, have you read and enjoyed Mamushka? What are your favorite summer soup recipes?  Let us know by hitting the comment button below!  Share some of your favorite recipes right here!