Sorrel Soup: The Ultimate Justification for Two Decades in Russia

One of the reasons I love living in Russia is the year-round access to sorrel. 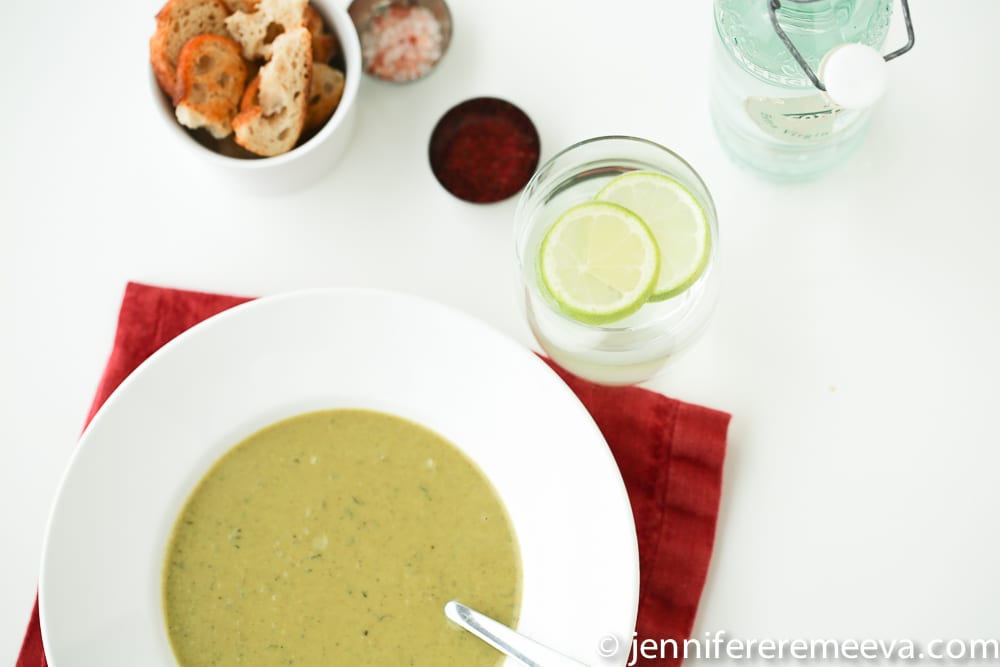 This delicate leafy green is a rare treat in Europe and the USA, where its brief, late-spring appearance is treated like a “one-night only” performance by a legendary diva.  In Russia, however, even in the depths of winter, it only takes a quick trip to the farmers’ market to score as much sorrel as you need to make a fantastic sauce for meat or fish (sorrel and salmon are a match made in heaven, as are chicken breasts and sorrel) or a classic Russian “green borscht” or “Shchavelya” soup. I assume there is a massive, top-secret sorrel bunker just south of Baku; I don’t care how nefarious it is, however, as long as they continue to satisfy my regular cravings.

Sorrel soup is a pale green thread that runs through the cuisines of Eastern Europe.

The Poles serve it cold, garnished with hard boiled eggs and sour cream. Ukrainian “green borscht” combines sorrel with potatoes, carrots, and other root vegetables for a clear soup, which is served hot.  A Czech version I encountered in the United States marries apples and sorrel for a very distinctive flavor that is at once sweet and piquant.  The French version of sorrel soup takes it to a whole new level:  a velvety puree, thickened with eggs and cream, both of which perfectly compliment the indulgent tangy, slightly peppery flavor sorrel leaves take on when they are cooked down in just a bit too much butter!

There are only two drawbacks to working with sorrel.  Once picked, there is a short window of opportunity to use it before it wilts. Then there is the fiddly problem of having to remove the stem from each leaf, which can be time-consuming and a bit nitpicking, but is essential: sorrel stems are extremely bitter and will ruin the flavor of your soup or sauce. 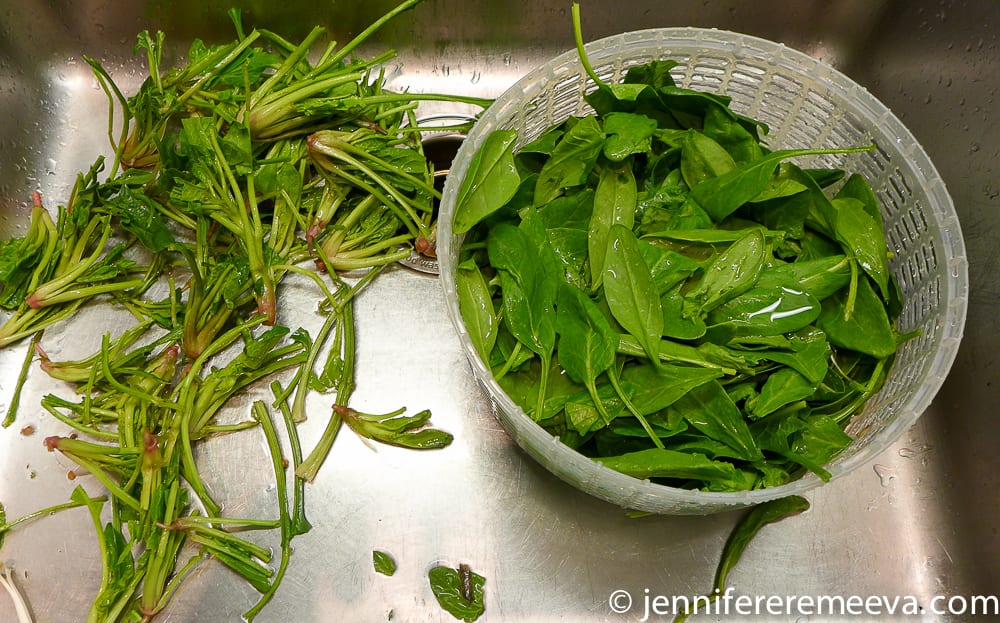 This is when a really good audio book or podcast becomes indispensable!  Here are a few ideas if you have a lot of finicky and repetitive kitchen tasks to complete:

This radio adaptation of Vassily Grossman’s Life and Fate: The Complete Series (Dramatised)
has left me standing at the sink long after the sorrel and spinach is picked, riveted by the engaging and absorbing tale of a group of people whose lived intersect and intertwine during the Battle for Stalingrad in Russia. It stars some of my favorite actors: Kenneth Branagh, David Tennant, Janet Suzman, Greta Saachi, Ellie Kendrick, and Harriet Walker. Even if you don’t care for wartime drama, you will be drawn into this drama.

All Change is the…well I’m going to say “most recent” because I fervently hope that nonagenarian Elizabeth Jane Howard keeps churning out more books about the three generations of the Cazelet family, and their progress through the years before and after the Second World War. These books were made into a wonderful BBC series Masterpiece Theatre – The Cazalets.
All Change recounts the…right, the most recent chapter of the family. I was ready to thunk down one of my Audible credits anyway, but when I learned that Penelope Wilton (a.k.a. Mrs. Crawley in Downton Abbey) had done the narration, I raced out and bought a lot more vegetables to peel, cherries to pit, and anything else that could keep my hands busy but my mind free!

I’ll admit it — I am a sucker for a good — or even mediocre — self-help book. Since I work from home and by myself, I am constantly in search for better approaches to using my time well, set and meet goals, and take my work to the next level. I found Manage Your Day-to-Day: Build Your Routine, Find Your Focus, and Sharpen Your Creative Mind (The 99U Book Series)
brimming with interesting ideas from some of the leading creative and productivity gurus of our time like Scott Belsky, Erin Rooney Doland, Seth Godin,Todd Henry, Steven Pressfield, Gretchen Rubin, Stefan Sagmeister, Elizabeth G. Saunders, Tony Schwartz, James Victore.

I’m also delighted to announce the much-anticipated release of the companion piece to Lenin Lives Next Door: Marriage, Martinis, and Mayhem in Moscow, Have Personality Disorder, Will Rule Russia: A Concise History of Russia

“You should imagine Russian history,” suggests American writer and veteran expatriate, Jennifer Eremeeva, “on a huge, 3D IMAX screen, surround sound booming with a jumbo bucket of popcorn in your lap and huge blue drink at your side.” Eremeeva should know: she became fascinated with Russian history at the age of thirteen, when she plucked a copy of Robert Massie’s Nicholas and Alexandra off the school library shelves. “And I don’t think it is over the top to say that my life was set on a new course.”
Three decades later, Eremeeva found herself living in Moscow, married to HRH, her “Handsome Russian Husband,” (although there are days when she secretly refers to him as her “Horrible Russian Husband,”) and writing her first book, Lenin Lives Next Door: Marriage, Martinis, and Mayhem in Moscow. As she explored what she calls “the lighter, funnier side of this big, messy country,” Eremeeva penned her own tongue-in-cheek version of the country’s turbulent and colorful history: Have Personality Disorder, Will Rule Russia: A Concise History of Russia as a companion piece to Lenin Lives Next Door.[divider_flat] As a former tour guide and Ivy League-educated historian, Eremeeva is an expert in making Russia’s history both entertaining and digestible to non-academics. She strolls expertly but lightly through her material, tracing the winning formula for Russia’s effective rulers back to the Tatar-Mongols, revealing why Ivan was not so Terrible, Catherine was totally awesome, and why Peter the Great and Stalin would never ever tweet or Instagram anything. Eremeeva helps us peek inside Empress Elizabeth’s baroque boudoir, deconstructs Gorbachev’s curiously split personality, and shows us exactly where the bodies are buried (Peter and Paul Fortress and the Archangel Michael Cathedral, of course.) Eremeeva’s unique fusion of humor and history and inimitable writing style brings the enigma that is Russia into hilarious focus in this compact and highly readable guide to thirteen centuries of Russian history.
Fans of Eremeeva’s blogs, columns, and her full-length book, Lenin Lives Next Door: Marriage, Martinis, and Mayhem in Moscow are sure to enjoy this further exploration of Russia’s soft and hilarious underbelly. For readers embarking on a visit to Russia or an exploration of the country’s rich literature and culture, Have Personality Disorder, Will Rule Russia offers a succinct, informative, and highly entertaining introduction to the country’s complex and expansive history.