I had to laugh when my friend Susan casually asked me if I knew how to make Siberian pelmeni. 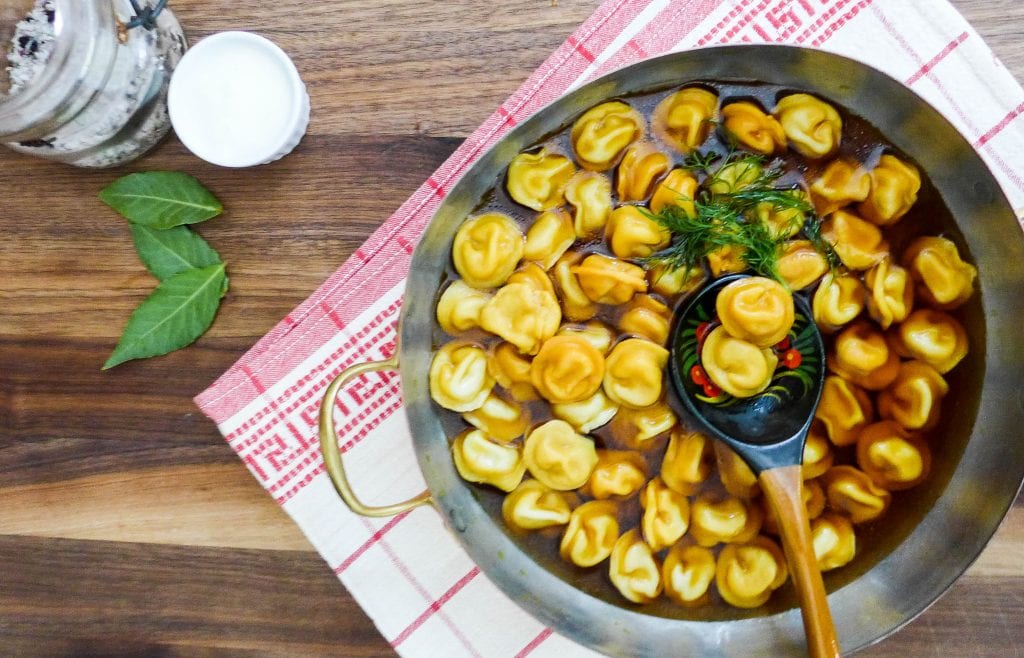 Susan, bathed in the innocence one who has never attempted them, wanted to make.  “My daughters had a Russian nanny who used to make them these incredible meat dumplings,” she said, “and after she left us, we haven’t really found anything else they like quite so much.”

I could not imagine clever, chic, artistic Susan, who works as a TV producer, up to her elbows in flour and pelmeni filling, nor indeed, that Susan could spare the entire day and a half the process entails.  Pelmeni and Susan didn’t seem like a match made in heaven when I looked at it objectively.   Susan’s life little resembles that of the women of the ancient Finno-Ugric tribes who brought pelmeni to the Ural Mountains. Although she’s often on the go, she’s not necessarily on the move; so is not forced to carry her entire food supply on her back, which means she isn’t choosing pelmeni because of the protection they provide to her family from savage animal predators: the dough on the outside of the dumpling masks the smell of the meat inside, an early, and indeed enduring appeal of pelmeni to the local tribes of the Ural Mountains.

The climate Susan lives in (Fulham, London) doesn’t get cold enough to facilitate the natural flash freezing capability which made pelmeni such a hit with Siberian housewives.  These sturdy women gathered after an animal had been slaughtered to create an assembly line Henry Ford would have envied: parlaying the fresh meat and simple dough into hundreds of delectable pelmeni, which they then buried in the snow.  This locked in the freshness of the meat and provided an ample stockpile of food for the long Siberian winter ahead.  What does a chic yummy mummy need with this kind of fodder?

But then I thought: Susan is, after all, a mother, and mothers through the ages have known that you’ll never be stuck if you have some frozen pelmeni on hand: be they buried in the -40-degree Siberian permafrost or tucked in the back of your SUBZERO freezer.  So, Susan, if you can find a two-day break in your hectic life, here is your pelmeni recipe:

If you are going to go to the trouble of making pelmeni, so the Russian saying goes, you might as well make a lot.  And, take your time, because, “pelmeni ni terpyat speshki,” or pelmeni don’t tolerate rushing.  And, take a leaf from the Siberian villagers, rope in some like-minded friends, and make it a community effort.

This article first appeared in French in La Russie d’Aujourd’hui, a supplement in Le Figaro on April 21, 2010.

Recipe adapted from A Gift To Young Housewives by Elena Molokhovets’ and A La Russe, by Darra Goldstein.

Thank you for visiting my blog and reading this article.  It means a lot to me, as does your feedback.  Tell me, did you try the recipe?  Did it work?  Are you a Yummy Mummy?