Yesterday the internet buzzed with a controversial ad for the Central Children’s Department Store, more commonly known as “Children’s World.” This iconic Soviet landmark dominates one side of Lubyanka Square, catty-corner to an equally iconic, sand-colored building: which is the headquarters of the FSB, the modern-day successor to the KGB, NKVD, and Cheka.

This seemingly discordant geography was actually deliberate. Missing from the small grassy plot in the middle of Lubyanka square’s hectic traffic roundabout is the statue of “Iron” Felix Dzerzhinsky (1877-1926), a leading revolutionary, and founder of the Soviet secret police. The 15-ton monument was pulled down by protestors of the conservative coup d’état in August 1991 and removed to the Graveyard of the Fallen Idols near the Central House of Artists. Intourist guides used to explain the proximity of Children’s World and Iron Felix as testimony to the significant contribution Dzerzhinsky made to organizing children’s homes for the hundreds of thousands of minors left homeless and displaced in the wake of World War I, the Russian revolution and the Civil War. In Soviet hagiography, Dzerzhinsky was the special protector of children: his portraits enjoying pride of place in schools, Pioneer Palaces, and orphanages all over the Soviet Union.

The dichotomy of the innocence of children and the pervasive power of the secret police came together in the ad, posted online by Meduza, a Riga-based alternative Russian-language internet portal. In it, a two Russian children are engaged in lighthearted role play with their parents. The children pretend to be KGB interrogators, using tactics of psychological and physical torture to induce their parents to take them to the Central Children’s Department store. The parents play along, although the audience can see that they are giggling to one another. At the end of the ad, the children conclude: “If you love your children, take them to Lubyanka!”

Although the Central Children’s Department Store has taken the ad down, you can still see this subtitled version on You Tube:

As a former PR and Marketing expert and also a Russian historian, I was easily able to parse the references, and I appreciated the complex historical context of the ad, particularly given that Children’s Department Store is owned by the once-embattled SISTEMA, who’s CEO, Vladimir Yevtushenkov was recently subjected to a spell of Kremlin-mandated house arrest. As a writer who tries to see the funnier side of life in Russia, I asked myself “is this funny?” And I thought about it for most of the evening, replaying the ad over and over, trying to decide if it was funny or just in incredibly poor taste. I tried to put myself in the mind of a 70-something Russian who had been, as assuredly almost every Russian was, affected by the Great Terror, which swept across the Soviet Union, emanating from the very bowels of Lubyanka in the 1930s. Would she find it funny? Would it, in some strange way, soften the impact of that dark chapter in Russia’s recent history?

In the end, I decided that, no: I didn’t find it funny at all. Nor was I able to dismiss it as yet another example of questionable Russian taste. No, I find the very existence of the ad deeply disturbing: and depressingly illustrative of the Russians’ perennial and pernicious hamhandedness with both memory and history.

Directly opposite Lubyanka Square from the Central Children’s Department Store, accessible only by a warren of dusty, yeasty-smelling, subterranean underpasses full of lurid boutiques hawking cheap T-shirts featuring Russia’s shirtless president, is a much smaller structure — if you can even call it a structure. The Solovetsky Stone, brought from the Solovetsky islands — site of one of the most notorious gulag prison camps — was erected in 1990 to commemorate the 1.3 million victims of the political oppression during the last century, many of whom passed through intake in Lubyanka Square. The organization behind the stone, Memorial, a Russian NGO dedicated to preserving memory of the victims of the Great Terror and promoting civil society to ensure that it never happens again, is currently facing possible closure by the Russian Ministry of Justice because it is deemed to be a “foreign agent.” 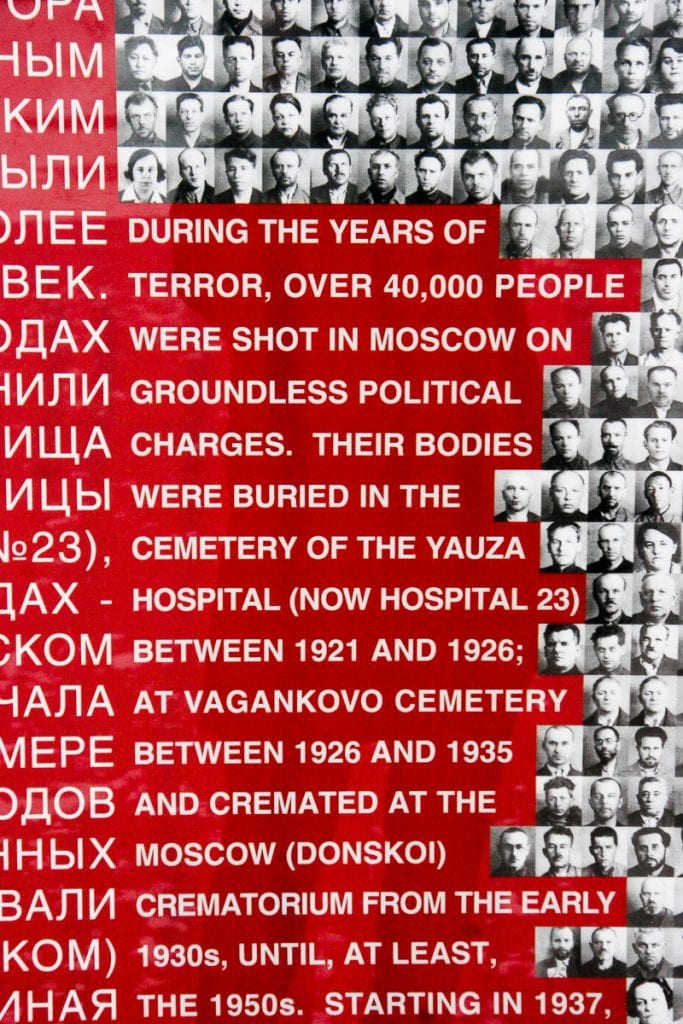 Description near the Solovetsky Stone in Moscow’s Lubyanka Square 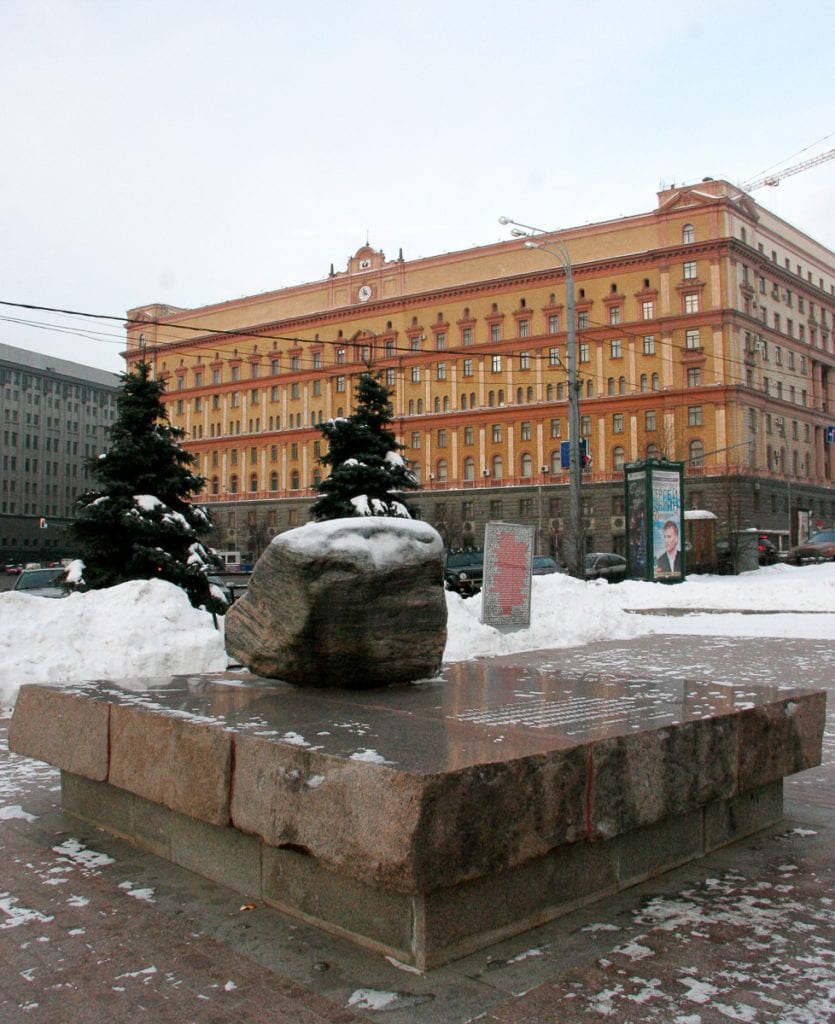 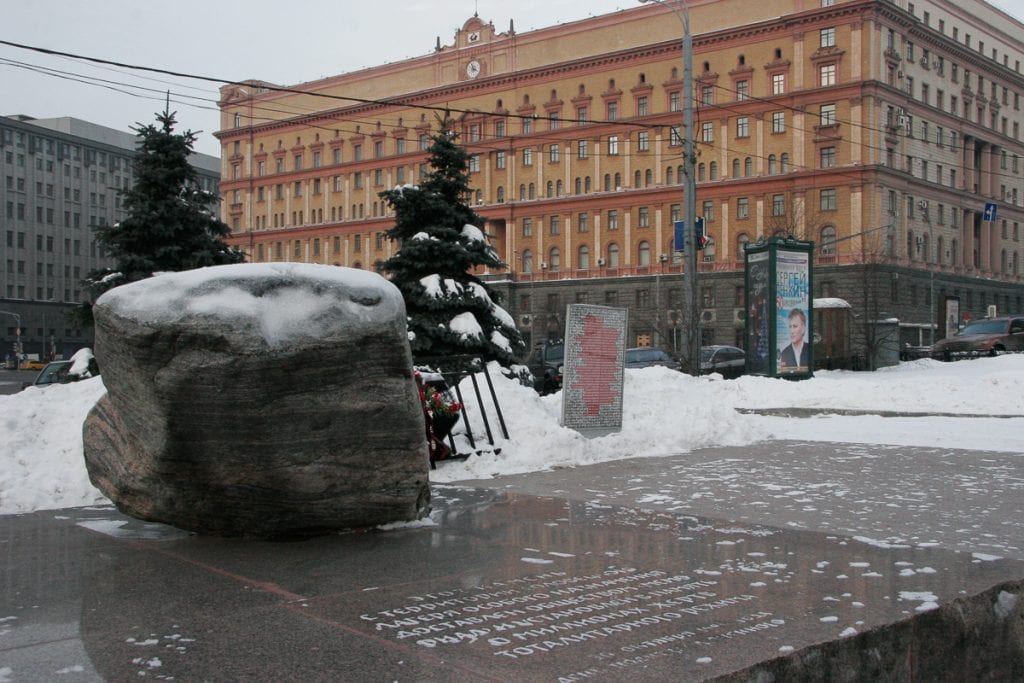 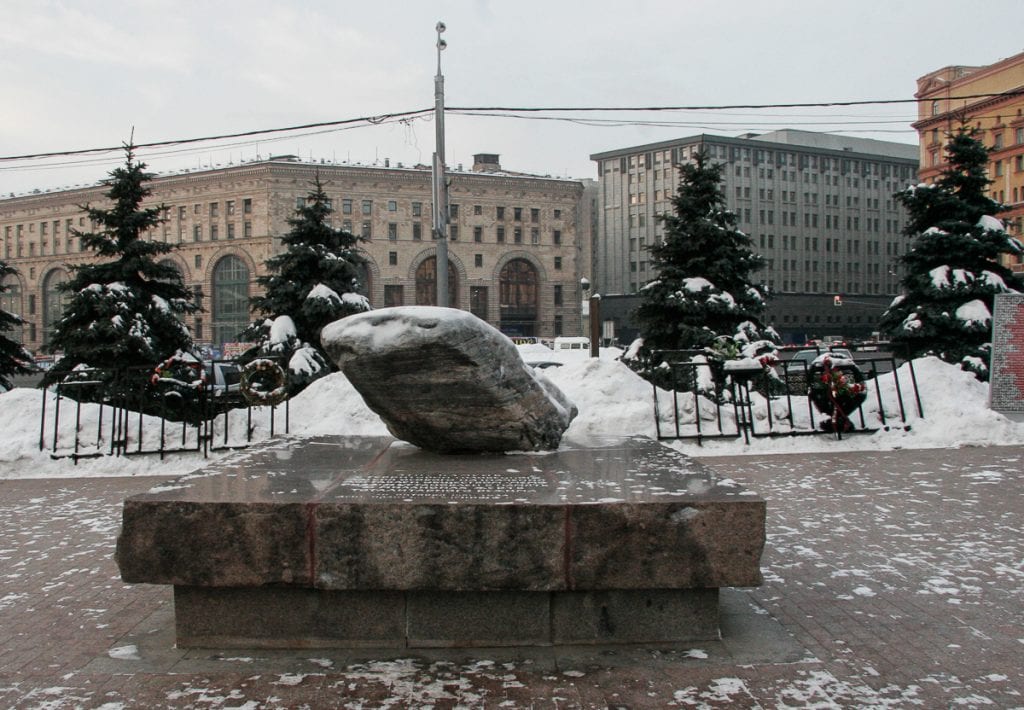 The Central Children’s Department Store behind the Solovetsky Stone, flanked by the FSB building on the right. 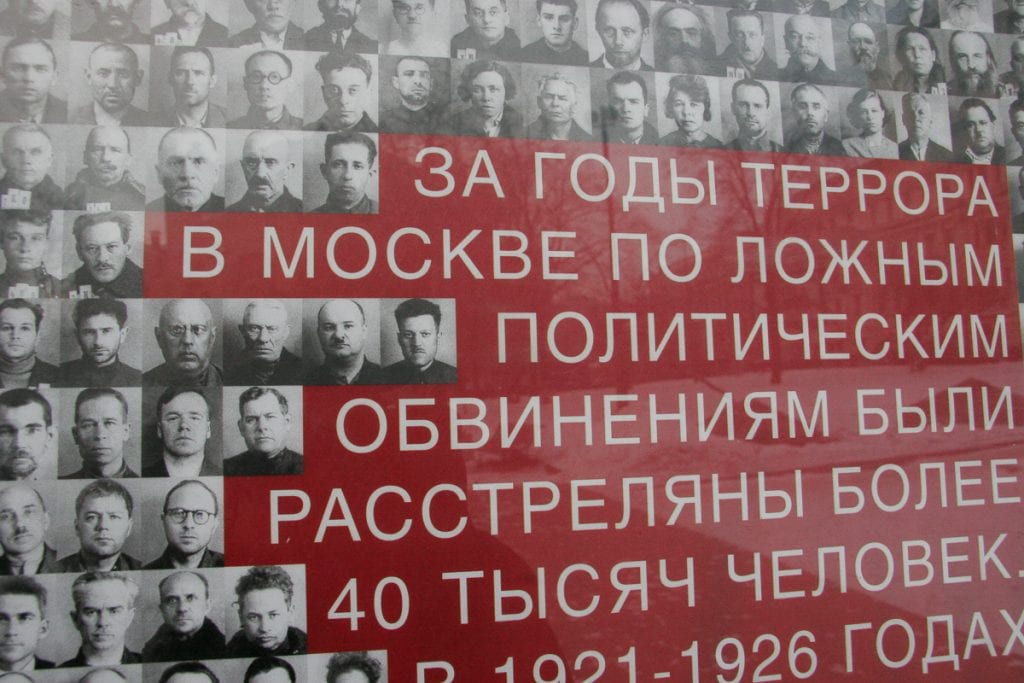 Thousands of faces of the victims of political terror in Russia 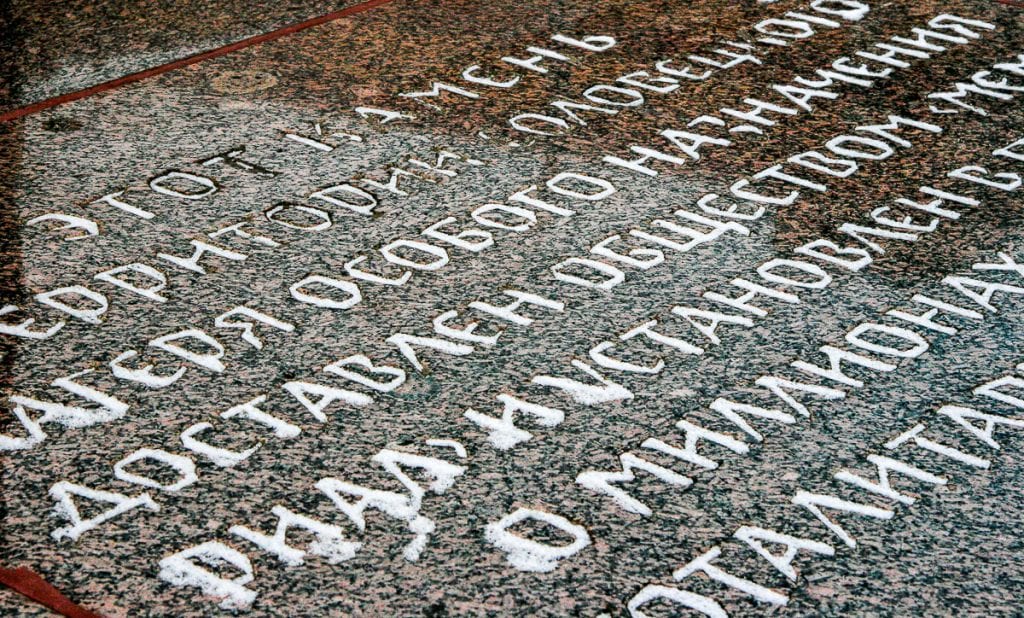 Inscription on the Solovetsky Stone in Moscow’s Lubyanka Square

Memory in Russia is very fragile and history very pliable. The sensitivity to a chapter of national horror such as the Great Terror, which ought to constitute the bedrock of a national consciousness today seems as nebulous as morning mist.

I worry about the collective memory of Russia when her smug, tone deaf Minister of Culture (who claims that he can’t recognize any of the Russia portrayed in Andrey Zvyagintsev’s Oscar-nominated haunting film about modern Russia, Leviathan) supports the foundation of a  museum dedicated to Stalin in Rzhev. The museum is to consist of fourteen exhibits dedicated to topics such as, “Stalin as the Symbol of Soviet Successes and Victories,” and “Stalin’s Role in the restoration of the Russian Orthodox Church,” but none about the Great Terror or the Gulags.

I worry about the interpretation of history in Russia when I visit Moscow’s Museum of Contemporary Russian History. This awkwardly assembled testimony to an intensely awkward period (1880s – present) in Russia’s history recently mounted a temporary exhibit dedicated to Grand Duchess Elizaveta Fyodorovna (1864-1918), who was Empress Alexandra’s elder sister. In widowhood, the Grand Duchess became a nun, founded the order of Martha and Mary and ministered to the poorest in Moscow. Like Alexandra, she was murdered by the Bolsheviks and made a Holy Martyr of the Russian Orthodox Church. When I first visited the Soviet Union in 1987, I wanted to visit the convent, which was abandoned after the revolution and allowed to fall into rack and ruin. The tour organizers claimed no knowledge of Elizaveta Fyodorovna or the location of the convent. Last week at the exhibit, which was co-sponsored by the now-re-opened Convent of Martha and Mary, I sat through a very long film produced by the church during which the narrator declared that “as everyone knows, the order to assassinate the Romanovs came from the American Federation of Jews.” I looked around at the eight or nine people who were watching the film with me to see if they, like me, were taken aback by this declaration. One old woman crossed herself reverently. Another man polished his glasses, and a bored schoolgirl tapped on her iPhone.

I worry that cultural sensitivity in Russia is a restricted VIP-zone and only the Russian Orthodox Church has the right to determine which subjects Russians should take umbrage about: issues as varied as interpretations of classical opera to PSA advocacy to prevent domestic violence. I worry that, by the same token, what Russians are supposed to worry about is dictated to them from the acid rictus of state-controlled television’s semi-fictional docudrama-style “re-enactment” of news events.

Can a country, which routinely — at least once a century — slaughters, exiles, or creates conditions intolerable for its best, brightest, and most talented, really afford to dilute, mortgage, or disregard such precious commodities as memory, history, and cultural sensitivity?

Or is that the object of the exercise?