A feminine take on the masculine art of shashlik. 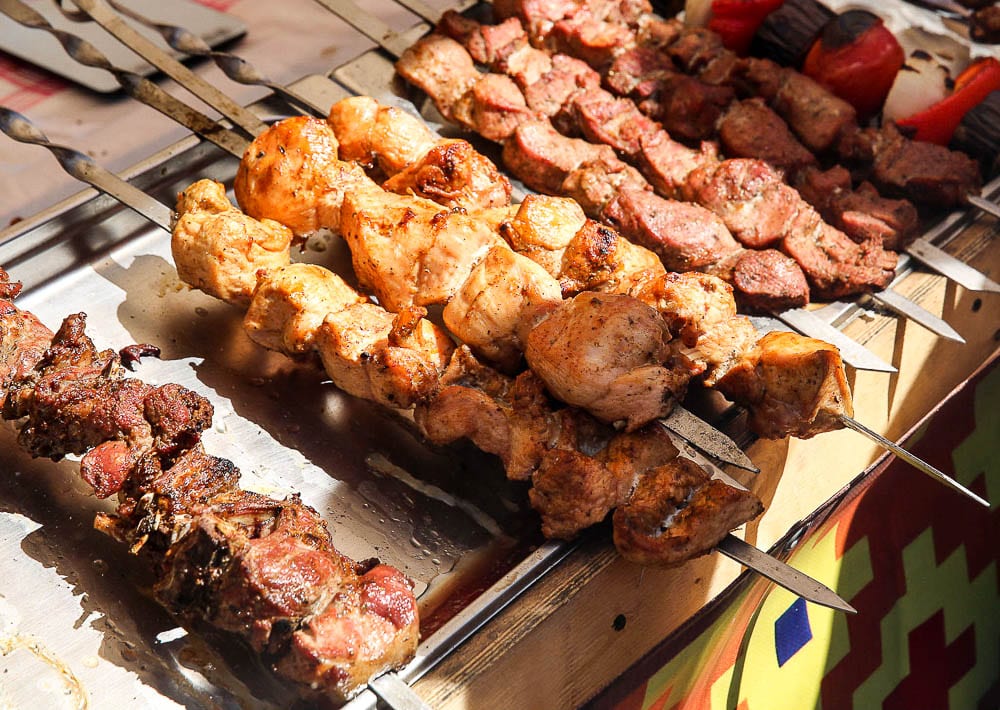 People who read my columns are very special, so when reader Laura, wrote to ask if I would do something on beet salad, I was more than ready to accommodate.

But the lilacs distracted me.   Spring comes quickly to Russia: one moment the world is a jar of dirty water full of muddy paint brushes, and then, overnight, it blossoms into the vibrant pastel colors of spring.   Up from Central Asia and the Crimea come the first of the fresh strawberries and ripe tomatoes, sold by peroxide blonds in pinafores and dirty fingernails.

Beets: at this time of the year?   No, beets in Russia are part of the musky bounty of autumn, not the budding promise of spring.

Spring in Russia comes with the first whiff of the pungent smoke of the “kostor” the barbacue grill.   As the lilac blooms, the “snowdrops,” those rickety, rusty, banjaxed cars used only to get to country houses, or “dachas,” from May to August bounce out to the dachas, where, even if the dacha has electricity, and many do not, the menu is traditional and unchanging:  shashlik: skewers of marinated pork or lamb grilled over an open wood fire.

Like so many of its cultural fulcrums, shashlik is not native to Russia, but Russians have made it their own.    That is to say, Russian men have made it their own.  Russian men are not natural cooks: cooking is a bit effeminate, is not associated with world domination, and involves cleaning, multi-tasking and long-range strategic planning.  Not madly them.  The big exception is shashlik, which, Russian men assert “cannot tolerate woman’s touch.”  I’ve noticed shashlik seems able to tolerate a woman’s touch during preparation and clean up, but Russian men do throw themselves into their sole culinary endeavor with gusto: spirited debates over the exact chemistry of the secret ancestral marinade (consisting of vinegar, oil, salt and pepper), and the proper arrangement of kindling in the “kostor” last as long as it takes to consume a bottle of vodka.   Tenderly and lovingly, they spear the clammy chunks onto lethal meter -long shashlik imaplers, and carefully lower them onto the flames.   I sometimes think that if Russian men lavished this kind of attention on their wives, the burning issue of Russia’s declining birthrate could be solved.

What to serve with shashlik?   Very simple:  tomatoes, cucumbers, dill and lavash, the chewy bread of the Caucuses.   No dressing, save salt, and when the produce is fresh, and the sun is in the sky until after 9 pm, what else, really, does one need?

Traditionally, shashlik stands alone – not accompanied by any fancy salads or complicated garnish.  Russians serve fresh vegetables of the season such as tomatoes, peppers or cucumbers with only salt for seasoning.  The reasons for this are primarily practical:  shashlik is prepared and eaten in the outdoors, or in the back garden of a dacha which may well lack refrigeration, sharp knives, or electricity to facilitate preparation and storage.   Russians are wise to avoid heavy, starchy accompaniments such as potatoes or the mayonnaise-based salads that grace a Russian indoor zakuska or hors d’oeuvre course.   Complicated accompaniment can also take away from the pure flavor of the freshly grilled meat, tinged with the smoke of the kostor, freshly mown grass and hint of pine.   In our Russian/American family, we’ve experimented with different culinary traditions to find side dishes that compliment shashlik.   Lighter, citrus-based salads with tangy herbal dressings seem to be the perfect match for enhancing shashlik without stealing its thunder.  Note: these are not traditional Russian salads, but they made from ingredients readily available in Russia and make frequent appearances at our table in Moscow.

Author’s note:  This article first appeared as “Le chachlik interdit aux femmes” in Russia Beyond The Headlines’s French edition in Le Figaro.  A Link to the original online article can be found here.