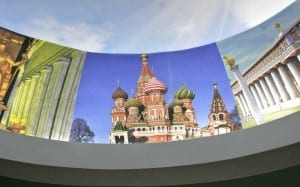 That’s when they finished the renovation of our apartment building’s lobby.

HRH, (my “Horrible Russian Husband”) and I live in a modern building in a somewhat business enclave part of central Moscow.  Like most new buildings in Russia, during the initial construction period, the cheapest possible materials were used on the façade and the public areas of the building (the lobby and the stairwells.)  The theory behind this cheapskate approach is that the residents will get together and upgrade their own particular part of the building, deciding as a collective body in sort of a neighborhood association on a certain design style, price range, the kind of materials and which amenities they desire and can afford. Decisions such as uniformed neo-fascist thug security guard, versus helpless old lady with purple hair.

Our “podezd” or entry way was the last to do anything about upgrading the facilities, primarily because a lot of people were still renovating their apartments, and it was generally agreed that we should wait until all the “capital renovations” were completed.

I’m not sure what happened next – as I spent some time away from Moscow last spring and anyway, I’m never really encouraged to go to these kind of neighborhood association meetings, but suddenly, after months of picking our way through the rubble of the lobby, we began to see the new design of the lobby take shape.

And it became clear to me that many people had missed the neighborhood association meetings.

I also began to realize with growing horror that those who had gone to the meetings and approved the design scheme were either on some kind of very bad acid trip or had formulated their ideas of beauty and elegance in the lobbies of four star hotels in the Red Sea resort town of Hurghada.

The flooring is that sort of highly polished faux marble tiling honed and polished in a Balkan state that doesn’t QUITE fit together.  I’m betting ours was actually designed for the bathroom rather than an entry way, particularly in a country where ice and snow make slipping and sliding and landing on your spine on highly polished marble a very real possibility from September – April.

If you land on your backside, however, you will have an unrivaled view of the inside of our lobby’s cupola (we have no actual dome in our building, but we have the inside of a cupola.)  And maybe landing on your backside will be a good thing, as it could prevent you from knocking your head on the cupola – it’s that low hanging.  Around the inside is a mural made from what I now know is called “photo wallpaper” of The Seven Wonders of the Ancient World…plus St. Basil’s Cathedral: a design theme that may seem incongruous if you haven’t spent enough time in the resort towns of southern Turkey.  To me, it is a nostalgic reminder of the good ole days when Russia was only an occasional guest at what was then known as the G7.  I sense a large, and very ornate crystal chandelier will be installed any day now. Watch this space.

I have slight concerns that the large and ornate crystal chandelier could possibly clash with the imposing mural on the main wall across from the door, which overwhelms the visitor upon arrival:  a floor to ceiling “photo wallpaper” rendition of a mountain range, crystal clear lake, and lush forest that is either Colorado or Tibet but certainly no place in the Russian Federation.  It might be one of the natural wonders of the world, but I can promise you it is definitely not a wonder of wallpaper hanging.

The Tadzhik building workers, security guards, and a few of the building’s domestic workers all think it is a sucess fou.  They have spent much of the past few days photographing each other in front of the almost-completed masterpiece, which is why none of them appeared at all nonplussed when I turned up, Canon in hand.

Because pictures are worth a thousand words, I include a full photo essay of our lobby, which I encourage you to browse in the sober contemplation that you should always, always, always go to your neighborhood association meeting.  Even if you’re encouraged not to… 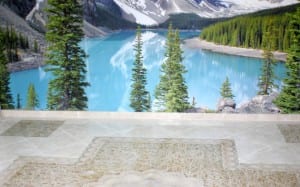 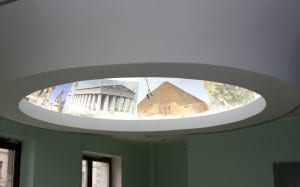 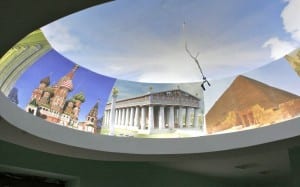 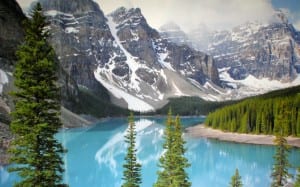 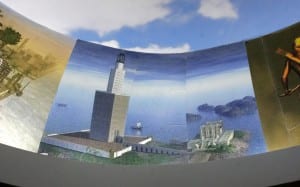 What Can You Do With a Kilo of Persimmons?

What Can You Do With a Kilo of Persimmons?