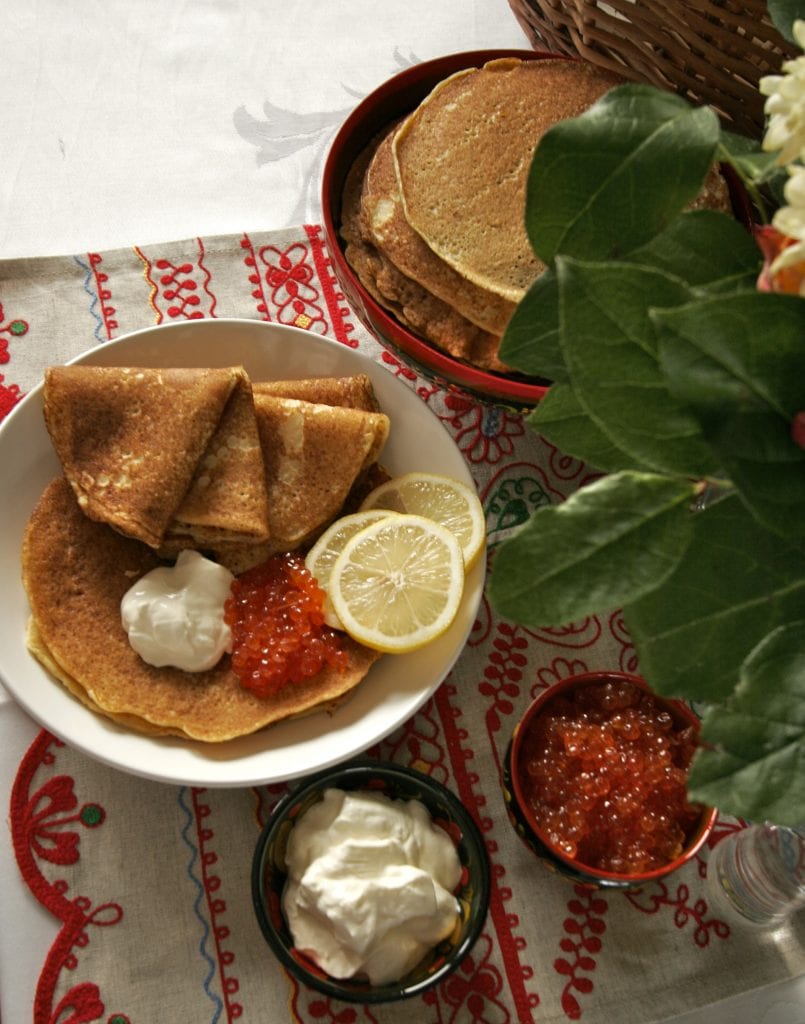 Russia’s riotous Mardi Gras: a week of partying, pancakes and punch-ups celebrates the end of winter, the beginning of Lent, and the promise of spring.

Half-heartedly absorbed into the Russian Orthodox Calendar, Maslenitsa is really a tenacious rite of spring belonging to a much older, more pagan culture of nature worship,agrarian traditions, and a heightened awareness of the change of seasons.  Maslenitsa was originally pegged to the vernal equinox, that moment in early spring when the sun passes directly over the equator, making day and night equal length.   Of the four points of the calendar (the solstices and the equinoxes), the vernal equinox was most revered by ancient societies, because it heralded the return of the sun and life after the darkness and death of winter.  Many ancient monuments such as the Temple of Solomon in Jerusalem were oriented such that the rays of the vernal equinox sunrise would fall directly above the High Alter.

Pagan Slavs interpreted natural phenomena in their religious worship with stories of human love and betrayal, sex and separation, and life and death.  In a popular myth reminiscent of Egyptian Isis and Osiris, Russia’s Yarilo and Morana are brother and sister lovers who represent life and death, fire and ice, and spring and winter.  Their courtship reaches a fever pitch during the summer solstice, only to spiral into betrayal in autumn, and separation and death in the winter.  Spurred Morana turns into a fearsome hag, spreading death and frost in her wake. Crops wither to dried straw as Yarilo retreats to the underworld. As spring returns, the faithful burned a straw effigy of Morana on top of the snow to call forth Yarilo back from the Underworld.   As the flames of the straw Morana crackled, pagan Slavs celebrated the return of spring by dancing, wrestling, and feasting on life-affirming pancakes, symbolic of the sun and eternal life.

Christians, ever-efficient recyclers of other people’s holidays, have nevertheless found Maslenitsa an awkward fit in the liturgical lead into Easter.  In agrarian Russia, Lent served as a handy spiritual excuse for a Spartan diet as it excludes meat, cheese, oil, eggs, alcohol, and butter, all of which do a lot to spice up plain buckwheat kasha.  The forty days of Lent coincide with the period when the staples of winter stores had dwindled down to a bare minimum in Russia.  Nowadays, of course, you can get mangos and quail in aspic at any supermarket year round, but many Russians proudly go through “The Great Fast,” as a way of clawing onto some moral high ground and dropping twenty pounds in less than two months: both goals easy to achieve if you are subsisting on buckwheat porridge and cabbage soup. Maslenitsa contains the word “maslo” meaning butter, although some scholars argue that it is a more ancient version of “mysia pust’” meaning “empty of meat.”  Whatever the explanation, it is a time to gorge on butter, cheese, and cream, and is to Russia what Shrovetide is to the Anglo-Saxons and Carnival and Mardi Gras are to the Spanish and French: a public celebration of the return of light and warmth and the last gasp of fun and fat – and pancakes of course– to be had before the onset of Lent.

The blini recipe which follows is from Anya von Bremzen’s invaluable cookbook, Please to the Table: The Russian Cookbook.  If you could only have one Russian cookbook (and thank god that’s not a rule) you can make a strong argument for it being this one:  von Bremzen divides her subject into regional groups and isn’t afraid to include emigre riffs, which often gets a Russian food writer in trouble!

I also highly recommend her latest work, Mastering the Art of Soviet Cooking: A Memoir of Food and Longing.  Much more than merely a memoir or a recipe book, this book is a fascinating journey through not-do-distant Russian history. von Bremzen’s style is elegant and engaging! ‘

What are your favorite ways to consume blini?  Do you like them just plain, or do you feel they only really come in to their own as a vehicle for caviar?  Let us know by clicking the comment button below!

This piece first appeared in La Russie D’Aujourd’hui and Le Figaro on February 16, 2011 in French under the title: “Les blinis sans états d’âme,”