New Year’s/Новый год: Is This Christmas??

No prizes for guessing what today is: It’s New Year’s Eve!  Hands down the brightest star in the Russian holiday firmament! It’s been going on very steadily since about 1918 and it is for everyone! Foreigners get confused about Russian New Year, Russian Christmas and all the things that go with it.  I wrote a piece about it for Russia Beyond The Headlines and it seems appropriate to reprint it here: 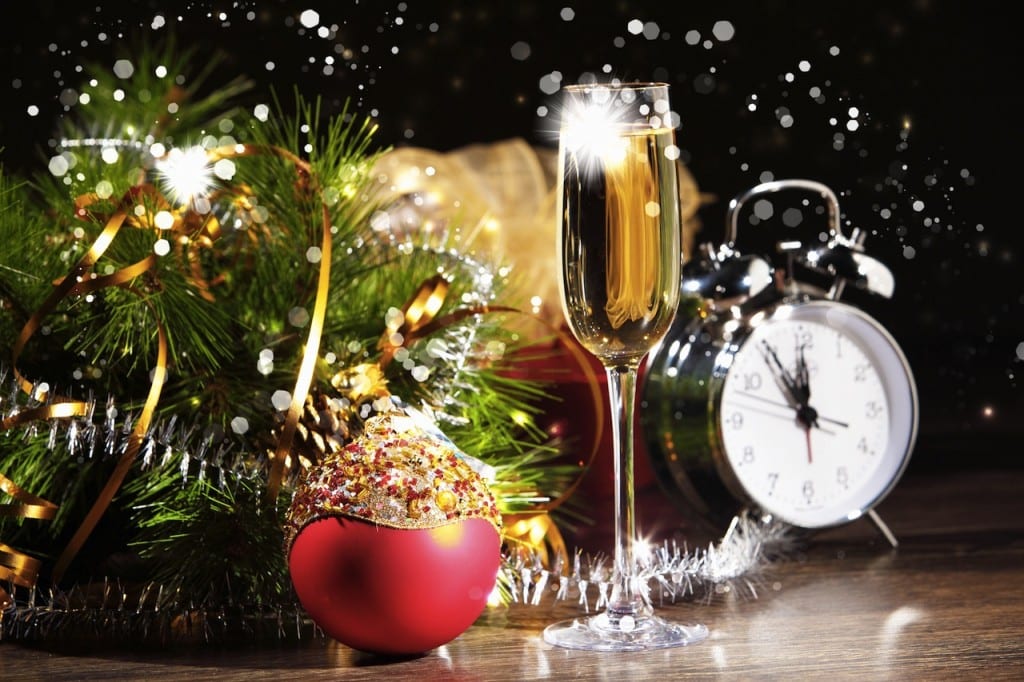 So, is This Christmas?

“Is this a Christmas Tree, or a New Year’s Tree?” asked my five-year old daughter Velvet, as I struggled with a tangle of fairy lights.

“It’s both,” said HRH, my “Handsome Russian Husband,” who was lying contorted on the floor, trying to get the tree to stand up straight in its holder.

“Tell Nastia,” I responded through gritted teeth, “that in our very fortunate family, Santa comes on December 24th, and then his cousin, Ded Moroz comes on New Year’s Eve.”

“Why?” asked Velvet, and they both looked at me expectantly. Christmas in our Russian-American family is a marathon, not a sprint.  Since Velvet was born, HRH and I have worked hard – he writing checks, me sifting the dry ingredients — to fuse the varying traditions of Russia and the West into our family celebrations.  The result is a month-long slog, from December 15th, when my friend Gail guilts us all into buying tickets to the Moscow Oratorio’s rendition of Handel’s “Messiah,” through January 13th, or “Old New Year” in Russia, at which point, I am ready to lock Prince Albert, Charles Dickens, and Pyotor Ilyich Tchaikovsky into a small, windowless room and throw away the key.

is a marathon, not a sprint.

Russian Christians adhere to the Eastern Orthodox calendar (see sidebar), which lags 13 days behind the modern day calendar.   This discrepancy was corrected in 1918, by the fledgling Bolshevik regime, but Christmas never reverted to December 25th in Russia, because the Bolsheviks began a systematic campaign to phase out traditional religious holidays and replace them with Soviet ones.  Christmas was shifted to New Year’s Eve.  At the beginning, stringent measures were put in place to see off any holdover of the old days:  Christmas trees, introduced to Russia by Tsar Peter The Great in the 17th Century, were banned in 1916 by the Holy Synod as too German.  The Bolsheviks kept the tree ban in place.   Stalin declared Ded Moroz “an ally of the priest and kulak,” and outlawed him from Russia.

“Like the Burgermeister Meisterburger outlawed Kris Kringle in ‘Santa Claus is Comin’ to Town?’” asked Velvet breathlessly, referring to the seminal 1970 animated American Christmas classic. I cast a careful look at HRH who was now struggling with the star on the top of the tree, “Exactly like that,” I whispered.

But you can’t keep the likes of Ded Moroz down for long.

In 1935 Pavel Postyshev, Stalin’s architect of the collectivization program, possibly concerned about his lasting legacy, published a letter in Pravda asking that “New Year’s Trees” be erected in Pioneer Palaces and that Ded Moroz and his granddaughter and helpmate Sneguritchka be allowed to return to the children of the Soviet Union on New Year’s Eve.  Ded Moroz and the trees were rehabilitated in 1937.  Although Christmas and other Orthodox holidays were reinstated on the Russian calendar in 1992, New Year’s Eve remains firmly entrenched as the primary holiday. Although Christmas itself was banned, Russians recycled traditional pagan and Christmas traditions as a template for the New Year’s Customs.  In Old Russia, when the first star appeared in the sky, symbolic of the Star of Bethlehem, families gathered to break their 40-day fast with a twelve course “Holy Supper,” featuring “kutya” or grain porridge sweetened with honey and dried fruit.  From pagan times, this dish symbolized life, hope, sweetness, and blessings to the home. You can still find kutya on the tables of today’s Russian New Year’s celebrations, along with lavish zakuski (hors d’oeuvres.) In the Soviet Era, New Year’s always saw the arrival of rare tropical fruits such as tangerines, which for HRH is the smell of his childhood New Year’s.   After the Holy Supper, the faithful in Old Russia returned to church for an All-Night Vigil.  Today, Russians gather around their tables in front of the TV to greet, not the Redeemer of Mankind, but President Dmitry Medvedev, who will hoist a glass of champagne and wish everyone health and happiness for the coming year.  Then fireworks will explode all over Russia and all the bells will peel, as Russians exchange three kisses and good wishes: “New Year, New Happiness, New Luck!”

This piece first appeared in Russia Beyond The Headlines and The Washington Post on December 15, 2010 and a link to the original online version can be found here.

Happy New Year Readers! Hope you are having a good one!  If you aren’t, here is a nice tip:  if you make Bloody Marys with Aquavit and Clamato instead of vodka and tomato juice, they are a.) much better and b.) cure the bite a lot better.  Which is about all the wisdom I’ve gleaned over this holiday season.

What are your New Year’s Resolutions? In 2013, I kept one of my resolutions and that was to finish my book!  The one I was writing, that is.  And I did!  Lenin Lives Next Door:  Marriage, Martinis, and Mayhem in Moscow is coming out in January of 2014 and will initially be available as both a hard copy hardcover and an e-book.  You will be able to get both on amazon.com and don’t worry, I will so keep you posted!  In the meantime, you can have a sneak peak  here, and sign up to get a free signed copy as part of the giveaway I’m sponsoring on Goodreads.

If your New Year’s plans include traditional Russian dishes, check out this article I wrote for Russia Beyond the Headlines about taking on the ultimate culinary challenge:  to make Salat Olivier and Herring Under Fur Coat edible.  It’s raised more than a few eyebrows!

Why is Russian Christmas on January 7th? Dates and holidays are often confusing in Russia because of the historical split between the Eastern Orthodox and Roman Catholic Churches over the reforms to the Julian Calendar by Pope Gregory XII in 1582.  Most of the world rushed to adopt what became known as “The Gregorian Calendar,” which introduced more effective leap years and more precisely calculated the length of the year not as 365.25 days, but rather 365.2425 days, a difference of 11 minutes.   The Eastern Orthodox countries, however felt that the Julian calendar more accurately plotted the spring equinox and Easter, and refused to buy into the Gregorian reforms.  If you think 11 minutes doesn’t make a difference:  think again:  over three centuries, as the Orthodox Christians doggedly stuck to the older, less accurate calendar introduced by Julius Caesar, a time lag developed.  By 1918, when Lenin decreed that Russia should join the rest of the world, the lag was 13 days long: the most severe jet lag in the history of mankind.   Today, the Eastern Orthodox Church still adheres to the Julian calendar, though it has indicated it is ready to make the shift in 2100.  Orthodox Christmas is 13 days behind what Russians call “Catholic Christmas.”  Russians, who believe that when it comes to holidays “more is more”, also celebrate “Old New Year” on January 13th as well as “New Year” and Orthodox Christmas on January 7th.  To ensure the season is indeed jolly, Russians enjoy a ten-day national holiday from January 1 – 10th!