I’m pleased to report that male chauvinism is alive and well in Russia, a fact that was brought home to me recently at a gathering of some of HRH’s military school buddies. 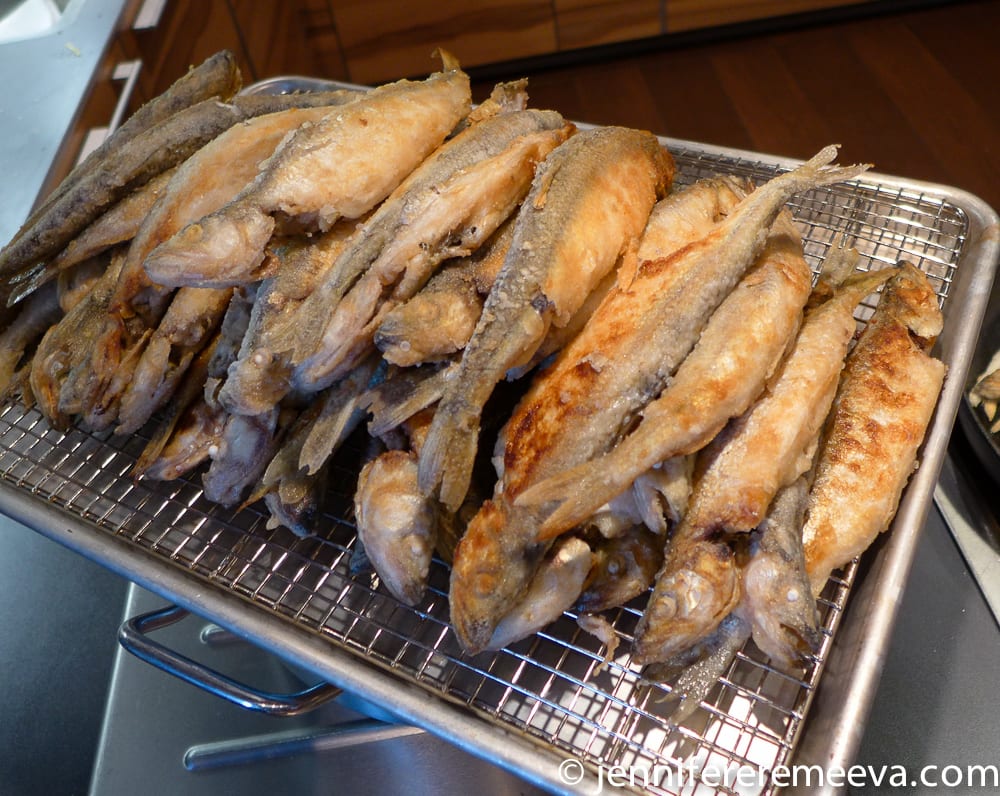 Readers of this blog will remember Borya, who hails from the polar naval base of Zapolyarniy and is Russia’s poster child for male chauvinism.  His annual visit to Moscow is usually bang in sync with the pukh, that delightful infestation of poplar spores that makes early summer a veritable nightmare.

This year, however, Borya’s visit came early.  It seems that veteran menace of NATO’s right flank has plans to migrate south…permanently, which seems wildly rash, if you ask me (and no one ever, ever does, and certainly not Borya) given The Current Situation in the Ukraine. But Borya is job-hunting (which is truly scary) and like all serious job hunters, he’s kick starting his search with a reunion of his inner circle of military school buddies.

HRH got in touch with Gena Varyenkov, a particularly lugubrious number who used to be in charge of a casino, until they outlawed casinos, and is now busy annexing Crimea as a Duma Deputy (of course he is). With Ilya Potapov inconveniently away it was to be a boys-only evening.  Which is a blessing, really.  Gena has been married twice, the first time to a rather successful Mary Kay saleswoman who went mad, and then to his (much younger – no one ever faulted Gena with excessive originality) secretary.  Borya has been married three or four times, and I’ve met at least two of his wives on their way back from the sanatoria in Sochi.  They never open their mouths except to ask me to turn off the air conditioning.  But for his job-hunting trip to Moscow, Borya had wisely elected to fly, or rather train, solo.  HRH got in two cases of beer and steadied himself for a long night of male bonding.

Of course, this involved fish.  With Borya, it always involves fish, and this time it was smelts or “korushki” which he collected packed in a Styrofoam box filled with ice from his opposite number in St. Petersburg as he was changing trains to Moscow. It seemed like a lot of trouble to go to just for some rather pedestrian fish. 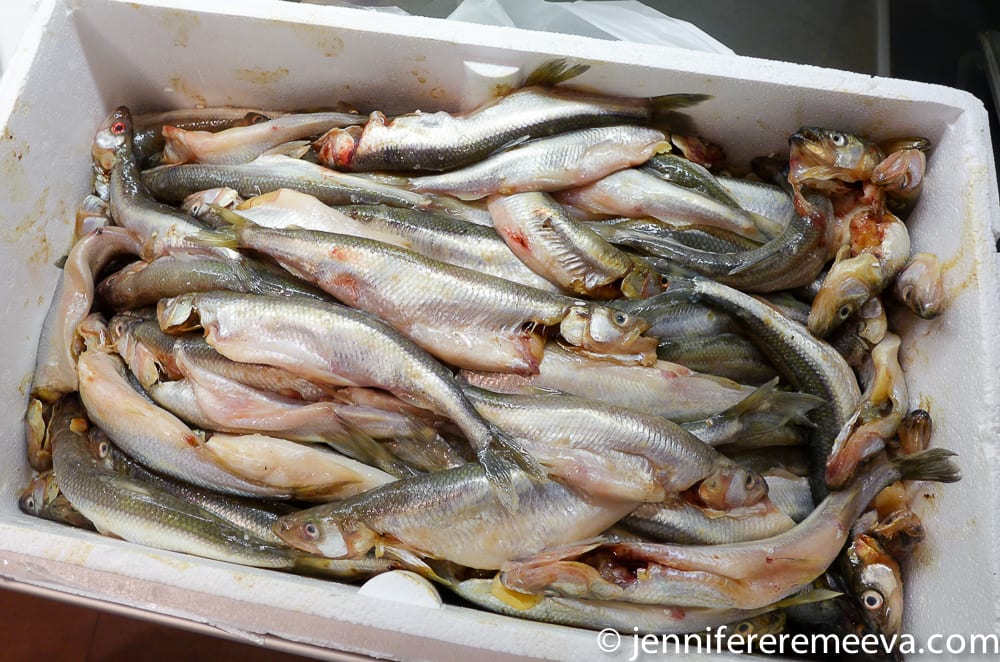 “They sell them at the market,” I said to HRH as Borya was bathing, “as much as you like – and dirt cheap too.”

“Just be sure to get some oil while you are out,” HRH said, changing the subject, “and a proper frying pan.  Gena says our frying pans aren’t the right sort.”

I’m all about upholding what they call on Game of Thrones “the courtesies” of hospitality (Borya, after all, has eaten a lot of my meat and mead) so I’m willing to pretend that smelts are something special; but I am not about to let Gena Varyenkov suggest that my kitchen kit is sub standard. Not by a long shot.

“You know, you shouldn’t fry smelts in a frying pan, you know,” I said in my bossiest, food blogger-y manner. “There isn’t enough depth.  What you want is a deep pot, and that also helps a lot with the splatter factor.”  The last time Borya had arrived with some fish to fry, we had to get a brigade of 16 Tadzhiks in to deep clean the entire apartment.

“Whatever,” said HRH and left for another 17-hour day at the office.

I browsed through some You-Tube videos on the finer art of smelt-frying, pleased to see that almost everyone used my preferred deep pot/slotted spoon method.  Of course they did.  On the advice of one particularly savvy You-Tuber, I went to a certain amount of trouble to find refined grape seed oil (no mean feat in Moscow) which the You-Tuber explained has a higher smoke point than the rot gut unrefined sunflower oil they sell at Perekrestok, as well as a much cleaner taste. I helpfully put those out on the counter, together with several jealously-hoarded, pristine zip-lock bags for dredging and some corn flower, which a You-Tuber form Tallahassee said made “…the best goddamn fried smelts in the en-tire South.”

Borya, however, looked askance at the mise en place and sucked some air through his teeth.

“This won’t work,” he said sliding the bottles of unrefined grape seed oil to one side.

Borya sucked some air through his teeth and looked to HRH for support.

I fetched some unrefined sunflower oil from the pantry and hoped it was rancid.

“I need some salt,” said Borya to HRH.  HRH went into the pantry, which is about as familiar to him as North Korea.

“Try using this pot,” I suggested, unhooking a deep and wide stew pot from the overhead rack, while Gena ducked, expecting all of the pots to come crashing down on his head.  (Someday, Gena…someday soon.)

Borya sucked in some more air between his teeth and looked pointedly at HRH, who went back to North Korea for the unacceptable frying pans.

Borya then squinted at the corn flour canister in a manner that suggested it might contain anthrax.

“It’s corn flour,” I said encouragingly, holding up the zip-lock bag.  Not for nothing was I the mom who led the renegade downtown Moscow Girl Scout troop to win their cooking badges, “ and, see, this is perfect for dredging the fish.”

“Little one,” he said to me in one of those annoyingly condescending voices Russians use, “this won’t work.  We need our Soviet flour.”

I wish Gena Varyenkov, who once offered me a glass of wine from the Island of Burgundy, would refrain from calling me “Little One.”  I’m taller than him, I’m older than him, and I’m a lot smarter than he is.  And, though he’d never credit this, I’m a much better cook than he is.

“Meet me at Shake Shack on the Arbat,” I said, “My home has been invaded by alpha male Russians.”

“That’s a plan,” she said stalwartly. 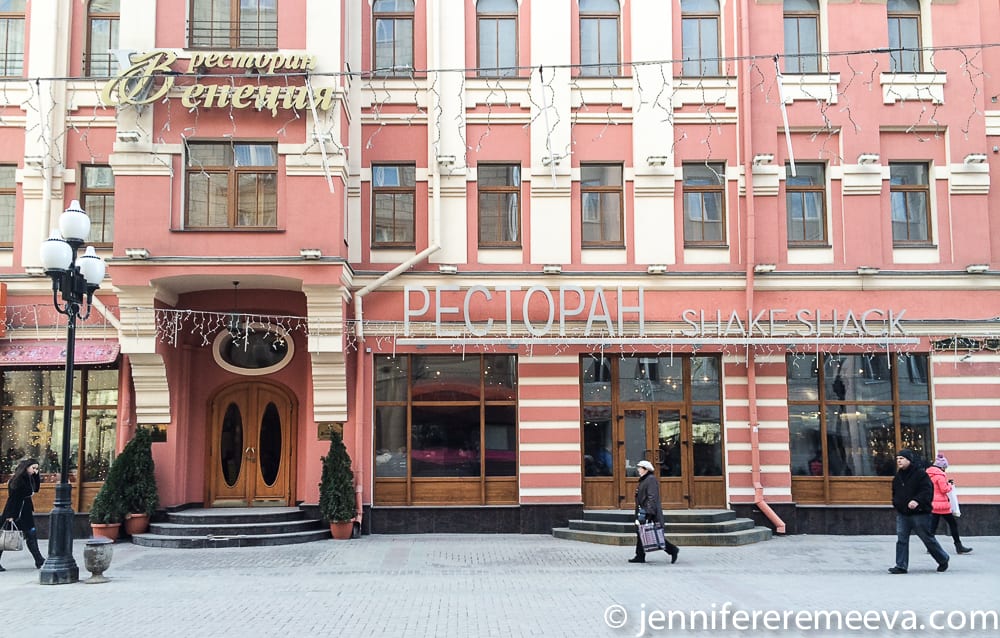 There is very little a Shake Shack burger, a custard shake, and some good girl time can’t put right

Except for a flour-covered kitchen, 2 ruined frying pans and $37 worth of pink Nepalese salt, now completely infused with eau de smelt.

Game, set, and match to Borya and Gena.

Well, Readers.
Has your kitchen ever been invaded by hostile aliens?  Do you retreat to Shake Shack or do you stay and fight?  Have you ever fried smelts, and if so, did you do it in a deep pot or a shallow frying pan?  I would LOVE to know, so hit the comment button below!

Borya and Gena may not want to learn more about kitchen equipment, but many readers do!  Do a little armchair shopping on my brand new website!  I’ve collected my favorite books about Russia, cooking, travel, and writing, my equipment picks for photography, cooking, and travel, as well as some things that, yes, I think are just great. 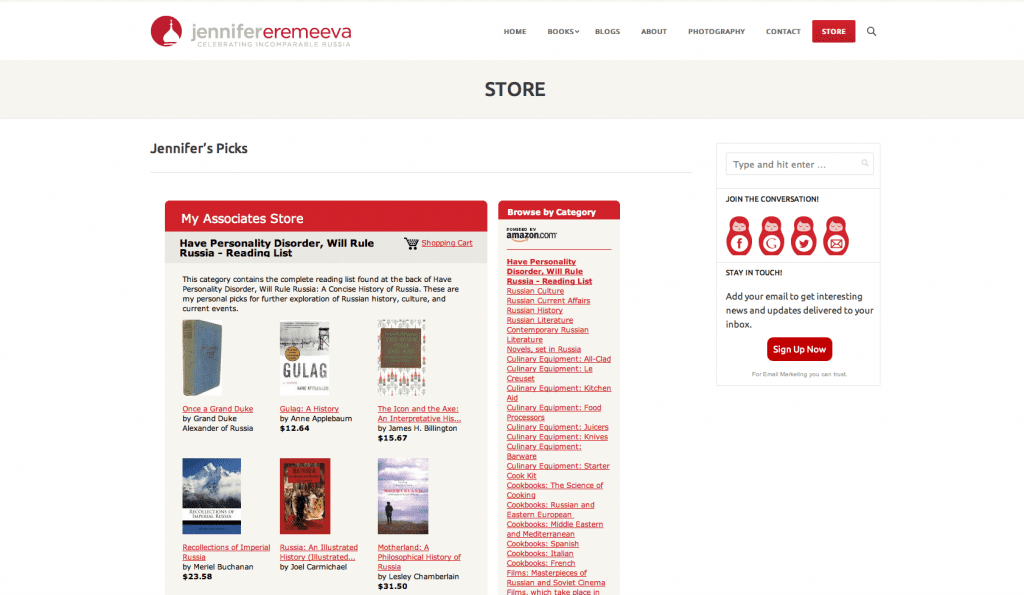 I’m also delighted to announce the much-anticipated release of the companion piece to Lenin Lives Next Door: Marriage, Martinis, and Mayhem in Moscow, Have Personality Disorder, Will Rule Russia: A Concise History of Russia

“You should imagine Russian history,” suggests American writer and veteran expatriate, Jennifer Eremeeva, “on a huge, 3D IMAX screen, surround sound booming with a jumbo bucket of popcorn in your lap and huge blue drink at your side.” Eremeeva should know: she became fascinated with Russian history at the age of thirteen, when she plucked a copy of Robert Massie’s Nicholas and Alexandra off the school library shelves. “And I don’t think it is over the top to say that my life was set on a new course.”

Three decades later, Eremeeva found herself living in Moscow, married to HRH, her “Handsome Russian Husband,” (although there are days when she secretly refers to him as her “Horrible Russian Husband,”) and writing her first book, Lenin Lives Next Door: Marriage, Martinis, and Mayhem in Moscow. As she explored what she calls “the lighter, funnier side of this big, messy country,” Eremeeva penned her own tongue-in-cheek version of the country’s turbulent and colorful history: Have Personality Disorder, Will Rule Russia: A Concise History of Russia as a companion piece to Lenin Lives Next Door:

As a former tour guide and Ivy League-educated historian, Eremeeva is an expert in making Russia’s history both entertaining and digestible to non-academics. She strolls expertly but lightly through her material, tracing the winning formula for Russia’s effective rulers back to the Tatar Mongols, revealing why Ivan was not so Terrible, Catherine was totally awesome, and why Peter the Great and Stalin would never ever tweet or Instagram anything. Eremeeva helps us peek inside Empress Elizabeth’s baroque boudoir, deconstructs Gorbachev’s curiously split personality, and shows us exactly where the bodies are buried (Peter and Paul Fortress and the Archangel Michael Cathedral, of course.) Eremeeva’s unique fusion of humor and history, and inimitable writing style brings the enigma that is Russia into hilarious focus in this compact and highly readable guide to thirteen centuries of Russian history.

Fans of Eremeeva’s blogs, columns, and her full-length book, Lenin Lives Next Door: Marriage, Martinis, and Mayhem in Moscoware sure to enjoy this further exploration of Russia’s soft and hilarious underbelly. For readers embarking on a visit to Russia or an exploration of the country’s rich literature and culture, Have Personality Disorder, Will Rule Russia offers a succinct, informative, and highly entertaining introduction to the country’s complex and expansive history.