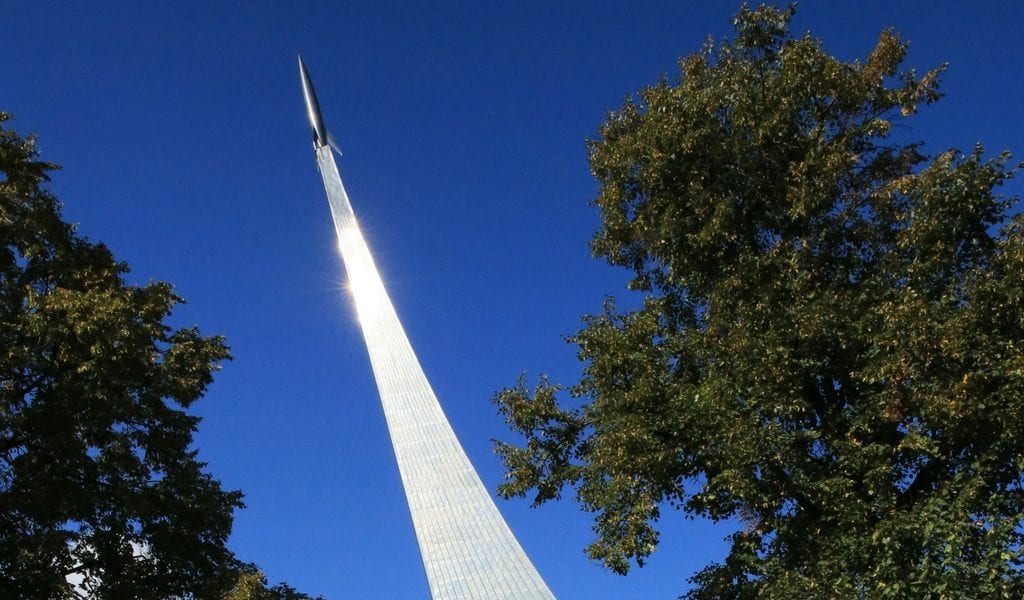 Per ardua ad astra, or “through adversity to the stars” was carved in faux Gothic lettering over the elevator up to the boys dorm at the prep school I attended (and this is a singular example of that school not taking itself a leeetle bit too seriously) and it is a good motto for today’s holiday honoring all those involved in Russia’s Air and Space industries.   From our balcony we usually get a great view of the fireworks from the Tuyshino Air Field honoring Russia’s significant achievements in this area, but just to be on the safe side, let’s focus on the space, rather than the air.

On April 12, 1961, Yurii Gagarin became the first person to travel in Space in Vostok 1 to massive elation back in the USSR.   We should also recall the contributions of Laika, the first dog in space, and the first woman in space, Russian Valentina Tereshkova.

There are lots of monumental commemorations to this striving for the stars in Russia: the largest of which is “The Monument to the Conquerors of Space” in Moscow.  Pictured here, the main part of the 350-foot monument is a massive obelisk sculpted in the shape of a rocket, launched dynamically into space with its smoke tail.  The titanium plates, which coat the construction, shimmer in the day.   The monument was the most common view I had as a tour guide, living at the Cosmos Hotel during my Moscow stays, and we often met dubious individuals behind the monument to pick up Bolshoi ballet tickets, caviar and military watches: the Holy Trinity of mid-1980s Russian tourism.    The Cosmos, which boasted restaurants called things like “Galactica” and “Evening Cosmos” and was one of the most rump-sprung awful fleabag places I’ve ever spent time in, but it was the epicenter of the tourism world.  HRH and I spent most of our courtship there, and I worry that emotion will overtake him and he’ll book a room for the nostalgia factor.   But, knowing HRH’s complete inability to plan this kind of thing, it seems unlikely.

Today, Russia is a big player in the International Space Station, and has pioneered space tourism for very wealthy individuals.  “Space,” as President Dmitry Medvedev said today, “remains a priority.”

Congratulations to everyone in the Air and Space industries.

Thanks for taking the time to read this post.  It means a lot to me, as does your feedback.  Do you have a Russian Air or Space experience you’d like to share?  Do you remember April 12, 1961, or did you score Bolshoi Theatre tickets behind the Monument to the Conquerors of Space? Whatever your input, I’d love to read it.  Leave a comment by clicking on the comment button below.