Today is the day of the Metallurgists! 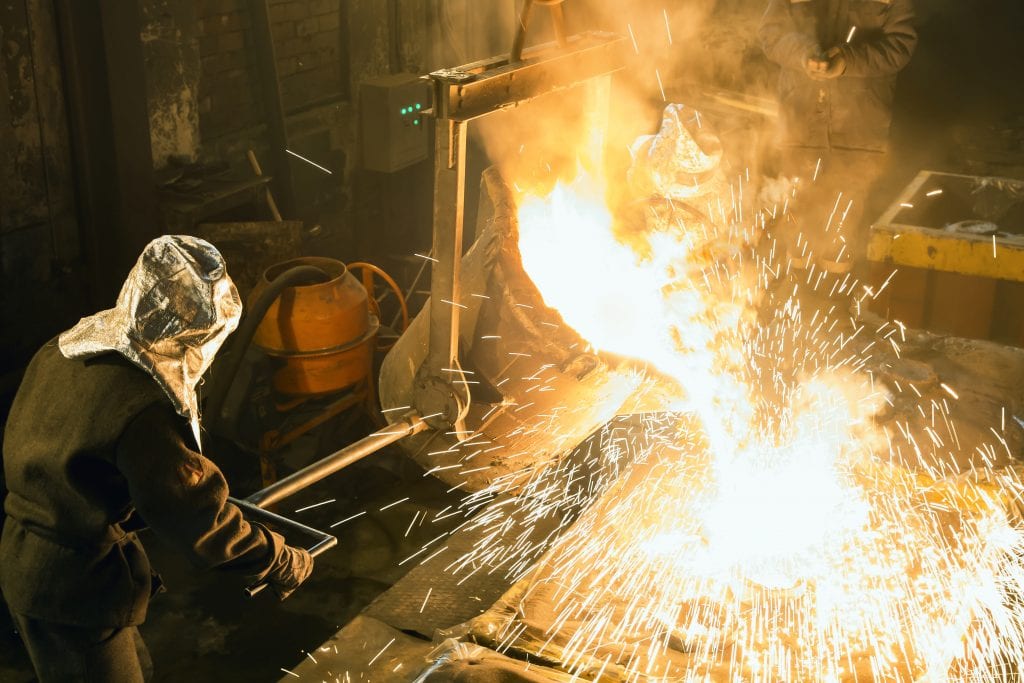 Today we celebrate all those who spend their days making alloys, or heating metal to a certain temperature to change its shape.  That kind of thing.

There are, of course, a lot of metals companies (yes, that’s how you spell it – I know from my time at The Bank) in Russia, and they make gazillions of rubles, which I suppose would make them fun to work for, were it not for the fact that they are all located in remote, inclement, and inhospitable regions of Russia’s interior – many of which began life as gulag penal colonies.  Still, I was intrigued enough when a headhunter rang me up several years ago about a Senior PR position at one such company with a direct report to literally the only good looking oligarch.  I put on my best Hermes scarf, dabbed some #5 behind both ears and went off to the interview.   Sadly, I had to call the agency afterwards and pull myself off the list:  it was that scary.   I didn’t mind having to go through the whole humiliating rigmarole of sticking my head into a small window and begging for a propusk (pass) to enter the building, and I didn’t really mind witnessing the vitriolic exchange that took place amongst the propusk ladies and the security guards about who was going to escort me up to the office in question (a distance of .7 miles through depressing warped pine paneling and dirty windows), but I couldn’t stick being escorted by an armed guard with an AK-40 rifle who walked behind me (which is exactly how they escort criminals).

No oligarch is that good-looking.

All that is gold does not glitter.

~J.R.R. Tolkien, The Fellowship of The Ring

Neither is the Pioneer Valley’s most prominent metallurgist, Good Ole Tom, though he, at least, really does want to see you, as he points out in his charming range of local TV ads.

Good Ole Tom came up at a meeting of the parents’ association at Velvet’s school, and it struck, I don’t have to tell those of you readers who are familiar with that kind of gathering, an incongruous note.   I have written before about how much I am enjoying being involved in Velvet’s new school, after a decade and a half of being ostracized by the Scottish Mums Mafia, so I was very pleased to be invited with such enthusiasm to join the parents’ association.  The parents association consists of a number of earnest female types who live within a 100-mile radius of the school, who get together once a month or so to discuss some important issues surrounding the continued financial well-being of the school, who will bring the hot chocolate to the horse show, and other item agendas in this vein.  It makes you feel good: like going to a yoga class.  It’s wholesome, it’s selfless, and it is the right thing to do.

Picture the reaction, and then, when in the “new business” section of the meeting, a father (yes, a father, at the parents’ association) got up to propose a new fund-raising idea.  He couched the idea in a snazzy presentation, which included words like “philanthropy” and “gold standard,” but you can’t live in Russia for almost 20 years without having serious BS-radar, and mine started to buzz.  What he was actually proposing was that we set up a tent on the lawn of this small, somewhat struggling, girls’ boarding school, and have people come with their old jewelry, kick-nacks, and other bibelots to sell for cash to his associates, with the school getting a slice of the financial pie.

I was riveted.  Nothing like this ever happens at a parents’ association meeting, and I thought the woman sitting next to me in a turtleneck with whales on it was going to have an aneurysm.  Several of the mothers were sitting, politely, looking like they felt they’d missed something vital to the conversation, particularly the ones for whom English is not a native language.

“Is it like Good ‘Ole Tom?” one of the more savvy Moms finally asked.

All at once, fifteen barracudas jumped into the fray, interrupting one another to be the first to introduce the most heinous aspect of this dubious fundraising concept:  the reaction of the local community, the senior who would sell her mother’s ancestral pearl earrings and head off with a guy on a motorcycle and never be seen again, the Public Relations message, the security, the potential for crime, the association with Good Ole Tom, the tax situation…the Scottish Mum Mafia had never been this animated.  Never.

“Are you on drugs?”  I casually asked one of the staff organizers of the parents’ association who had added the item to the agenda. “Because if you are, I would be so interested to learn where you obtain that kind of fine pharmaceuticals.”

“This is not, per se, a terrible idea,” she argued. “It would make more than a bake sale.”

I tried to think of other ideas that would make more than a bake sale. I came up with a lot, but the best one was to auction off the senior class as escort girls – low overhead, I figured, and you could do the entire thing on-line.  But I wasn’t sure it would get off the ground with the parents’ association.

Just as long as we steer clear of metallurgy…that’s my rule.

Are you involved in a parents’ organization?  Does it ever get out of hand?  What’s your story?  Have you ever been escorted to a job interview by an armed guard?