Winter in Russia is a marathon, not a sprint. 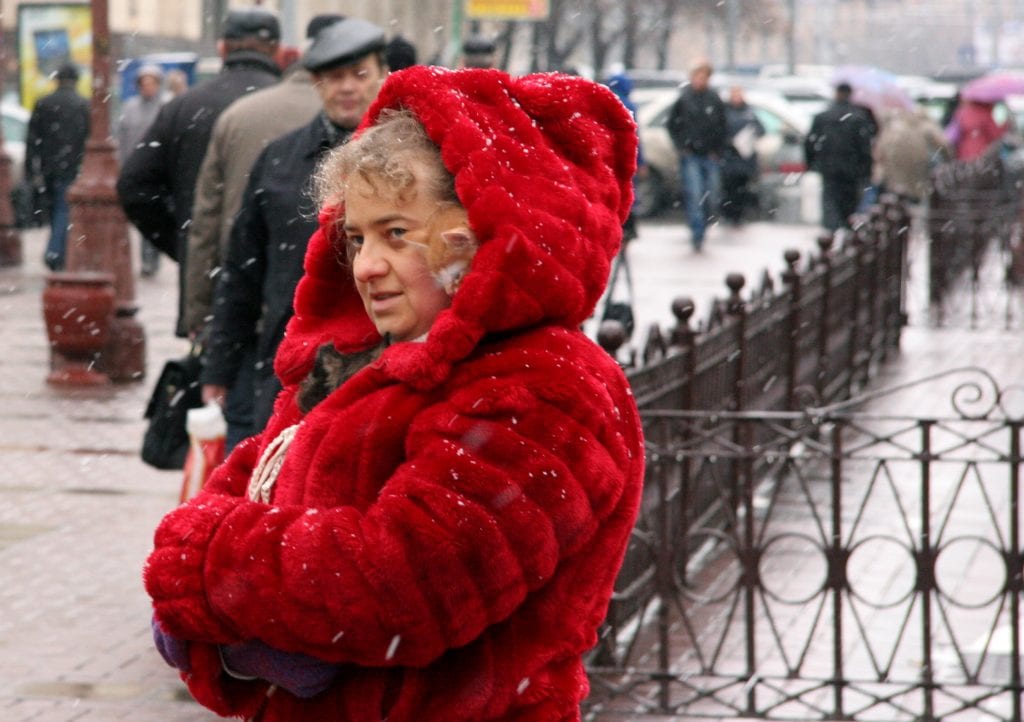 And because of this, it is vital to have intermittent water stations along the way, particularly coming into the home stretch.  At this point, in marathon terms, we are roughly at mile 18, and the end is nowhere in sight.   But there are a few bright spots on the horizon, and we do best to train our focus on them: Men’s Day (February 23rd), about which more next week in my column in Russia Now!   Men’s Day, a sort of one-way Valentine’s Day, is just a warm-up for the main event coming later in the Spring: International Women’s’ Day on March 8th, and I’ll be writing about that too.

These are secular and Soviet holidays, which, when I look at them from the point of view of a historian, I see were invented to wean Russians off the massive rush served up by Orthodox Christian Lent, which began last week.  Lent, of course, is no one’s idea of fun, but in agrarian pre-revolutionary Russia served as a handy spiritual excuse for a Spartan diet, excluding meat, dairy, oil, eggs, fish, meat, or anything else that might make life slightly more bearable, like alcohol, which taste great accompanied by only turnips and oatmeal.   The forty days that Lent covers is just that time when the staple of Russian winter stores dwindled down to the bare minimum.  Nowadays, you can get mangos and quail in aspic at any supermarket year round, but many Russians proudly go through “The Great Fast,” as a way of clawing onto some moral high ground and dropping twenty pounds in less than two months: both goals easy to achieve if you are subsisting on buckwheat porridge and cabbage soup.

Russian culture is all about extremes, so the feast/famine cycle is inbred into the rolling cycle of the year.   Fun-filled Maslenitsa otherwise known as “National Cholesterol Week,” precedes Lent.  Maslenitsa – or “butter week” is the same thing as Mardis Gras, Shrovetide or Carnivale: a traditional gorge before the austerity of Lent begins.  Maslenitsa, which lasts a week, is a time for feasting and drinking, eating traditional pancakes or bliniy, which not only use up all of the forbidden foods, but also represent the spherical sun, central to Maslenitsa’s ancient forerunner: an early spring pagan festival heralding the end of winter and the return of the sun.

The anti-religious campaign that characterized much of the previous century did not seem to make much of a dent in Maslenitsa – though the celebrations were less public, confined to mothers making pancakes for their children, as their mothers had made for them.  Now that religion is the new red in Russia, Maslenitsa has been reinstated with terrifying enthusiasm by the authorities, in large-scale public celebrations: open-air festivals, concerts, pancake stands on every corner – you get the idea.  My friend and colleague Evy Hua wrote a great piece on it – it was her first Maslenitsa and she got into it.

I’m not a fan.  I’m not pining Lent or anything (I’m not a masochist), but Maslenitsa is associated in my memory with a truly scary afternoon, getting separated from HRH and Velvet as we strolled through Moscow to try and get down to Red Square to see the public Maslenitsa celebrations, and what on earth were we thinking?  I had my large camera and telephoto lens with which I hoped to catch some of the national merriment, and I foolishly did not transfer my wallet, keys, or mobile phone into the large camera bag – not a mistake I will ever make again.  As we got down towards Red Square, we encountered the usual public holiday scene: a plethora of policemen backed up by raw army recruits looking baffled and angry, and glowering hostile senior citizens with retro-Soviet red armbands proclaiming them “Friendly volunteer.” 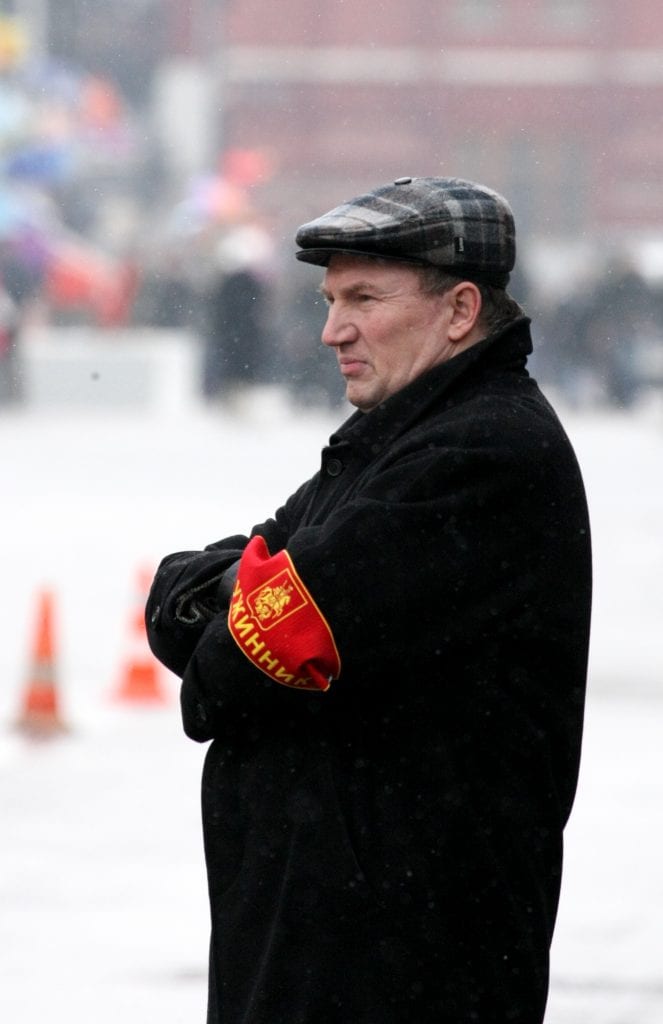 The temperature was hovering around freezing, it was sleeting steadily, and, as we progressed, we joined swelling crowds who were pushing, shoving, and breathing stale beer fumes on one another.   The police had blocked off the usual traffic and pedestrian routes, sending the crush of people about one and a half miles out of their way.

“Comrades!”  One woman shouted above the din, “Turn back!  There are no bliniy on Red Square…we’ve been hoodwinked!” 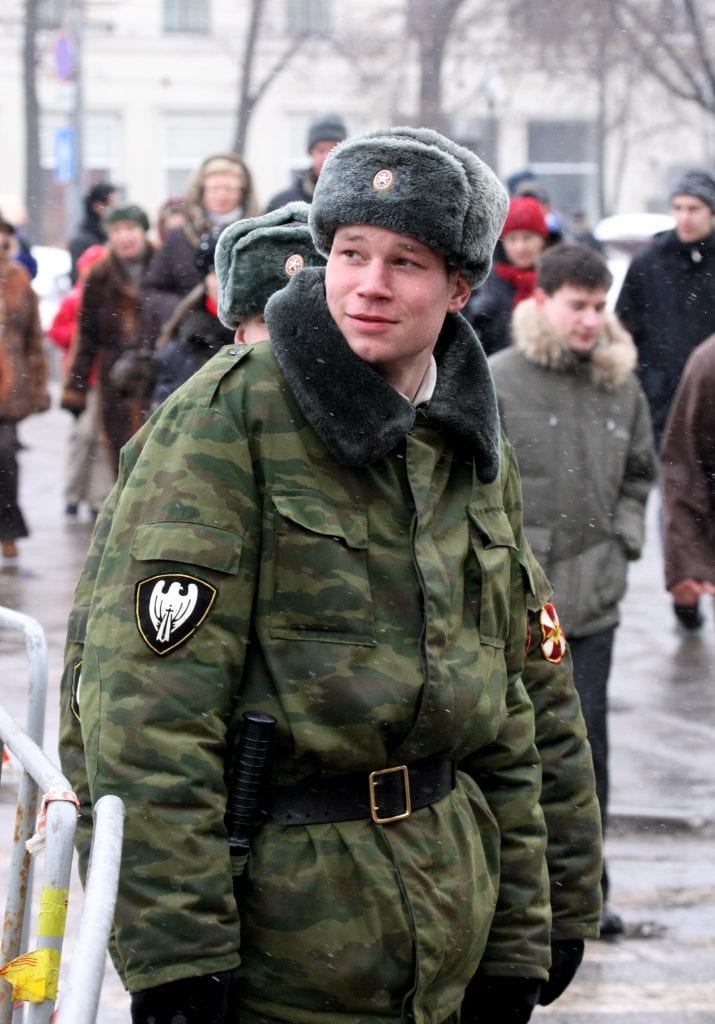 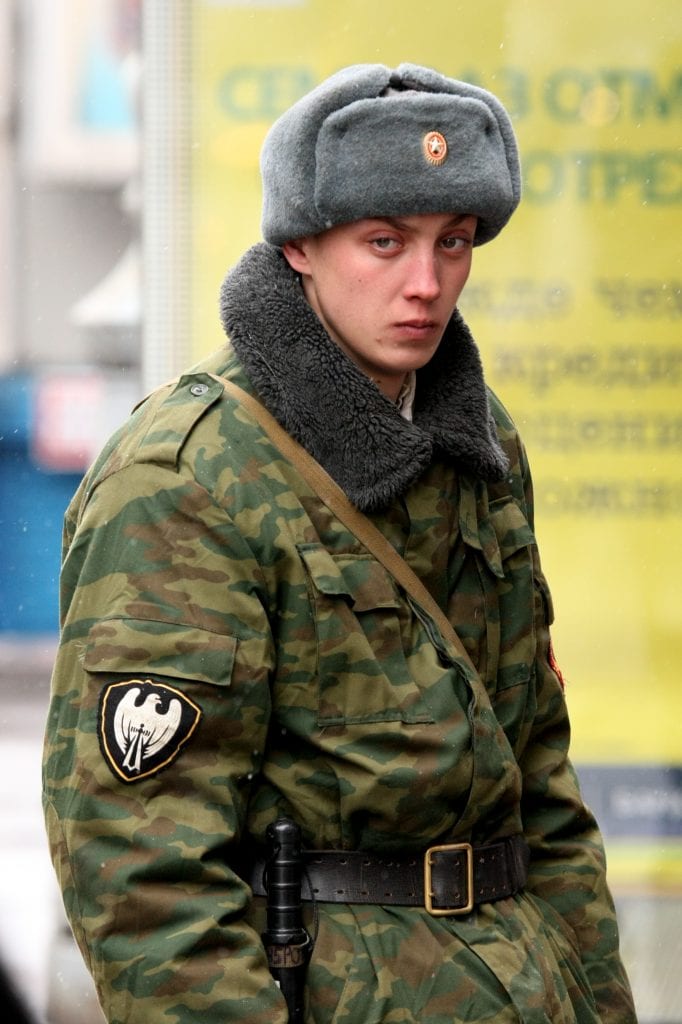 The scene reminded me of Khodynka Field – the tragic event which tainted Nicholas II’s coronation, when hundreds of poor peasants were killed in a stampede for the traditional free beer, woefully mismanaged by the authorities.  It was also reminiscent of “Bloody Sunday,” in 1905, when peaceful demonstrators marched on the Winter Palace to ask the Tsar for bread and were fired upon by the palace guards. It was like every public holiday in Russia: a dangerous place to be with menacing law enforcers everywhere, too many people and no system.  In the push and shove, I got separated from the family and couldn’t find them anywhere.

With no money and no phone, I tried to find police station where I could borrow a phone.  There was no meeting point, no first aid station…nothing except thousands of policemen brusquely directing human traffic through metal detectors, flanking Red Square, where cheerful sponsorship banners from the Campbell Soup company fluttering in the breeze.

I approached a policeman. 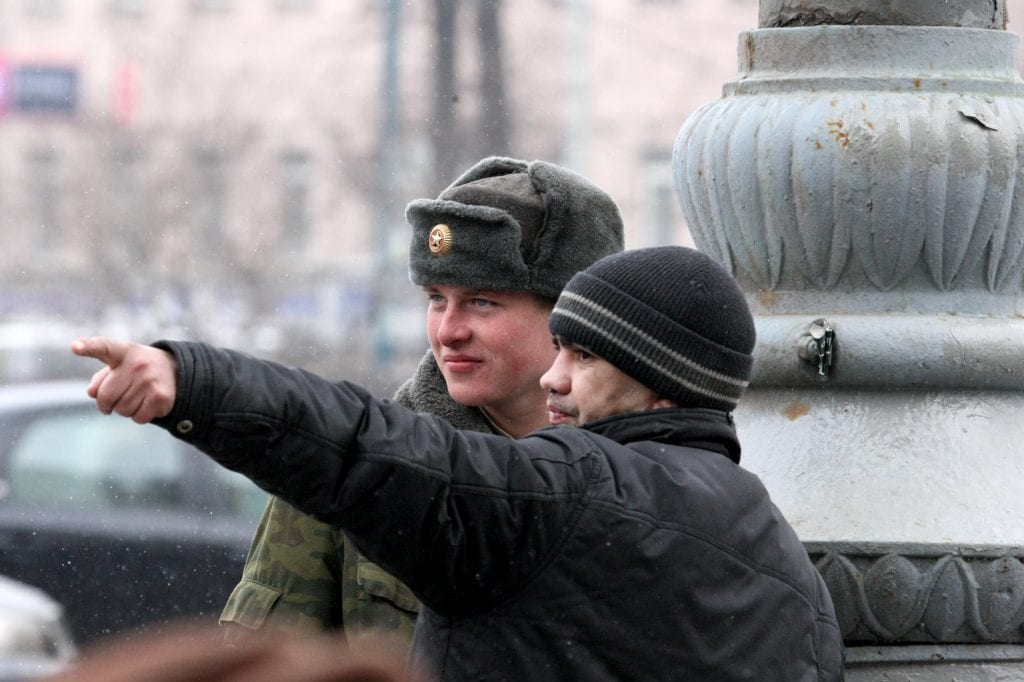 I had always told Velvet to do this if, God Forbid, she’d ever got lost in Moscow.  HRH had agreed, but qualified the advice by saying it was much much much better never to get lost.  This turned out to be excellent advice.

“Can you help me?” I asked the policeman.

He looked at me, confused, as if he’d not heard that request before.

He furrowed his eyebrows, lifted a cigarette in gloved hands, dragged deeply, blew smoke at me, and then gestured with the cigarette to another, slightly older man.

“You must address the ‘starshiy’ (meaning literally – the elder, which also indicates a higher military rank).  I shuffled over.

“Help you?” he barked, “what do you think I can do?” asked the starshiy defensively.

“I’m lost – separated from my family.  I don’t have a phone, and I don’t have any money.  Can I go to your precinct and phone my husband so he can come and find me.”

“Nyet…nyet…” he said, making a shooing gesture with his sawn off Kalashnikov rifle.

There was nothing for it.  I wasn’t, of course, lost at all, just slightly overwhelmed by the situation.   So, I walked back home, all the way around the inconveniently re-routed pedestrian traffic, trudging up Tverskaya Street, slipping and sliding on the ice, swerving to avoid groups of drunken Tadzhik migrant workers in bright orange coats. 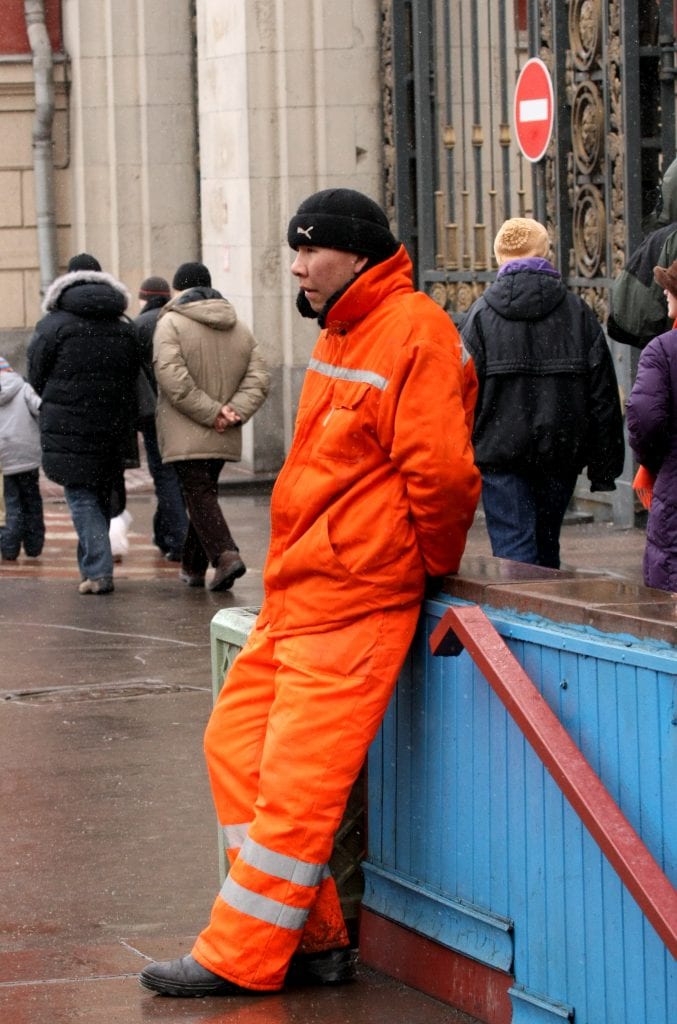 Lugging my heavy camera case.  I kept my eyes down, as I walked the three miles to my apartment building.  The 300-year-old lady concierge, who provides the critical line of defense against criminal elements at our building, informed me that HRH and Velvet had not yet returned.  The phone rang, and she disappeared into her glass hut, picked up the receiver, turned her back to me and began to exchange lengthy holiday greetings with a relative.  I crossed one leg over the other, suddenly aware of the relative warmth of the entresol, that I needed the bathroom rather urgently.   She finished her conversation and turned to me in an annoyed manner.  I explained my predicament, and asked her if she could phone the Commandant (which is how you refer to the Super in Russia, can you imagine) to let me inside the apartment, she looked horrified, threw her arms out wide, wailed that the Commandant wasn’t at work

And then she told me the thing that really, in the end of the day, sums up the attitude that keeps Russia out of the WTO – that it was way outside the ‘framework of her competency’ to do a single, solitary, thing.

This story has a happy ending.  Velvet wasn’t lost, and I turned my back on Ninel (Lenin spelt backward – truly) Alexandrovna, and sought help from a more trusted source.  I trudged back down the stairs.  I left our courtyard and shuffled my way down a well-worn path.   I pushed open the door of our neighboring Starbucks.  Katya, the barista gave me a big smile.

“Katya,” I gasped, crossing my legs in desperation to hold in my bladder,

“Could I please use your phone – I got separated from the family and I don’t have any money or my keys.”

“Of course!” she said, proffering the store’s landline and pouring me a cup of coffee.  “On the house,” she said with her charming smile.  “For the holiday!”

Later, I learned that the last day of Maslenitsa is called “Forgiveness Sunday,” during which everyone bows down low in front of one another and asks forgiveness of one another, so as to start Great Lent out with a clean heart and in the spirit of reconciliation and Christian love.

So, forgive me, reader. Next week we’ll find a much funnier side…