Food wise, Thanksgiving is the most stressful holiday of the calendar year. It doesn’t have to be! 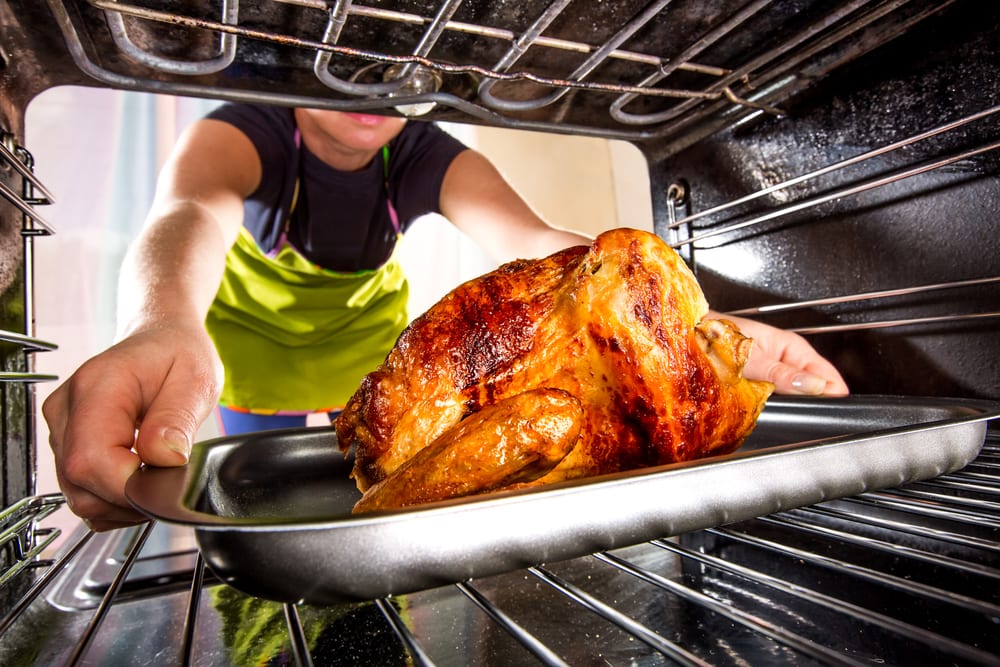 I was lunching with my British friend Cordelia yesterday and mentioned the frenzied run up to this very American holiday.  “Yes,” she mused in her cut glass tones, “that’s the day I get down on my knees and thank God I’m not American.”  (Between you and me?  I am not convinced this is the only day of the year Cordelia indulges in this pastime, but I digress.)

On the surface of it, Thanksgiving seems simple:  The menu is basic: roasted poultry, stuffing, potatoes, optional vegetables, and some kind of relish, then pies to finish.   What makes it complicated, however, is the emotional baggage we bring to it.

This is heightened by a warp factor of 20 when, as expats, we are 3,500 miles away from the nearest box of Stove Top Stuffing or tin of Ocean Spray cranberry sauce.   The stakes are high:  if we don’t have Aunt Hilda’s sweet potato and marshmallow casserole, or Cousin Maude’s canned string bean, pistachio, and Velveeta melt, it just won’t be Thanksgiving, so what’s the point?

I want to challenge you to throw all that out the fortechka for your Russian Thanksgiving.  Thanksgiving, when we are, as President Lincoln said in the Thanksgiving Proclamation of 1863, “sojourning abroad” is rather a time to break the chains of the past and jettison the traditional in favor of the experimental (and believe me, that processed Russian cheese isn’t going to do the trick, and good luck finding the marshmallows!)  Trust me, soon your Russian Thanksgiving will be lodged in the annals of your own family lore, and in five years, you will be scouring Farmer’s Markets in Des Moines for obscure Russian kliukva or Borodinsky Bread, because it has become the “taste of Thanksgiving.”

Here is another liberating thought:  Thanksgiving doesn’t have to be hard:  it’s one big meal, but you can break it into very manageable pieces, and you can streamline and simplify it.  Here’s how:

Thanksgiving Myth # 1 – Busted:  You do not have to stuff the turkey:

I’m not advocating not having stuffing, which after all is why we all look forward to the fourth Thursday in November, but rather that you don’t have to go through all that craziness of putting the stuffing in the bird.  It’s messy, it’s tricky, and salmonella never far from anyone’s mind.  The turkey soup will be gungey.  If you over stuff it, you risk explosion and even I can’t come up with the complete lexicon of how to explain to a Russian landlord that a large bird exploded in the oven, splattering wet bread all over the inside.     I love stuffing, and in the next few days I’ll be encouraging you to knock yourself out on the stuffing:  get fancy with chestnuts, oysters, apples, dried fruit or whatever takes your fancy, but cook it separately in a baking dish, or, as I plan to do this year, in muffin tins for neat little portions.  Cook it the night before, refrigerate it, then let it come to room temperature for a few hours while the turkey is roasting, then, as the turkey rests and someone is hacking away at it, while you and your buddy argue about gravy, you can slip the stuffing into the oven to warm it up.  Alternatively, you can nuke it, as long as you remove the stuffing from any metal containers.

Thanksgiving Myth # 2 — Busted:  You Don’t Have To Have The Meal on Thursday.

Move it to Saturday or Sunday of that same week.  Believe me, your Russian HR manager is so not interested in your need to remember the friendship forged between the Native Americans after the first hard winter in Massachusetts. Yeah right.  It’s a work day in Russia, same as any other.  So, shift it to the weekend when you can enjoy the full measure of a tryptophan-induced haze.

Thanksgiving is a time for sharing and that means doling out the work.  If you are hosting the meal, I think you should make the turkey, primarily because toting around a roast turkey in Moscow is a pain.  Coordinate and delegate with your invitees, who are likely to be what I call “The Urban Family,” or your friends and colleagues here in Russia.  Be flexible and understanding about Dee Dee really wanting to do Brussels Sprouts, and Joe Kelly saying he just can’t imagine Thanksgiving without mashed potatoes, even though you have a hankering to try a more chic turnip and sage mash you found in this month’s “Saveur.”   Ask everyone to bring their dishes completed in labeled serving dishes (so you can return them) and only needing heating up right before the meal. 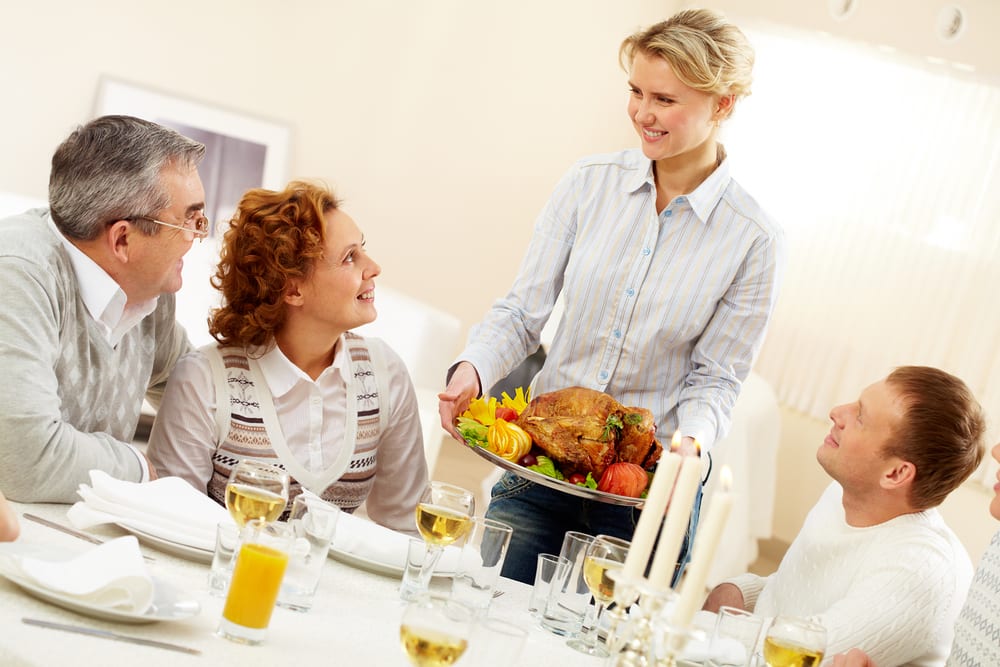 Thanksgiving Myth # 4 – Busted:  You Don’t Have To Have One Large Turkey: You Can Have Two Small Ones

Your Russian oven may not be up to it.  I have often had two smaller ones, which will cook much faster and leave me with more bones for stock.  Don’t tell too many people this, but, of course, you could also just have a lot of chicken…

This is personal choice.  I think any time between 2 and 4 pm is the perfect time to have Thanksgiving Dinner.  Ask guests to come an hour before you plan to sit down, but be sure to have something on hand which will, on the one hand keep body and soul together, but not get in the way of the feast to come.  Avoid heavy cheeses or pates. My choice for this is always seafood.  It’s light, it whets the appetite, and if you serve it with citrus, it cleanses the palate for what is to come next.  Buy a bag of Emborg cooked shrimp and serve with a cocktail sauce (1 cup/250 ml of ketchup, a generous spoonful of horseradish, a shake of Tabasco, a glob of mayonnaise, a squeeze of lime and a generous shot of tequila or vodka.)  Serve with champagne or Bloody Marys. 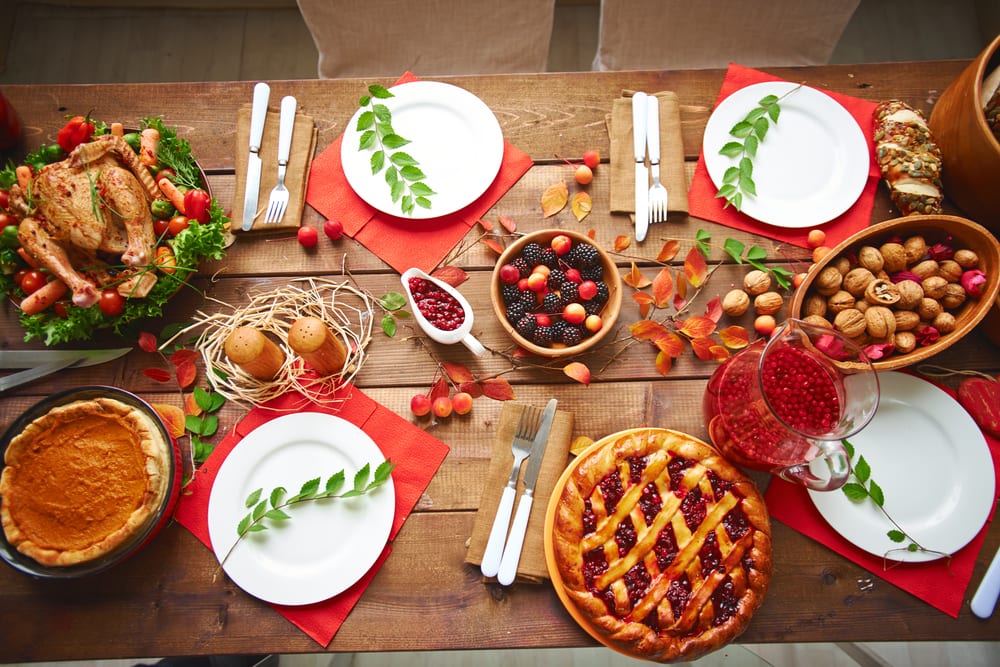 Make It Easy, Fun and Relevant For The Kids; Make it Eas(ier) on the Parents:

Kids should certainly be included in the festivities, but think carefully about the range of ages you will have at your Thanksgiving feast and consider an earlier seating for the children, possibly with paper plates and napkins and (dare I suggest it) some child care laid on.

So, okay – you are all geared up for your Very Russian Thanksgiving.  Countdown begins:

Here are approximate times for both stuffed and un-stuffed turkeys.  These are meant to be rough guidelines only.  If you have sourced your turkey from the farmers’ market or LavkaLavka, and it is free-range, slaughtered the day before, it will cook much faster than a frozen turkey (which you have obviously unthawed.) Brining, while also making the bird incredibly moist, speeds up the cooking time as well, so keep an eye on the turkey as it cooks.   After the first hour, you can add some chicken stock/white wine to the roasting pan to get some gravy going.  Watch out for the skin of the turkey being scorched on the top.  If this is happening, smear butter on the bottom of a sheet of aluminum foil and paste it butter side down on to the turkey.

The best way to tell if a turkey is done is to take its temperature:  it should have an internal temperature of 170-180 F or 76-82C.  Make sure the stuffing is at least 165F.  If you don’t have a meat thermometer, take a sharp knife and insert it into the drumstick.  If the juices run clear, you are done.

When the turkey is done, bring it out of the oven and place on a carving board.  “Tent” it with aluminum foil for at least ½ hour.

While you “rest” the turkey, slot the vegetable dishes into the oven to warm up and make the gravy.

The gravy is where it gets ugly.

My friend Thad went ballistic one November over it (and then we later learned he was bi-polar.)  I have seen mothers threaten daughters with large knives over gravy.  I am not sure why, but it does.  My advice is to designate a Gravy Tsar and order everyone out of the way.  If no Gravy Tsar suggests himself (it curiously, like grilling seems to be a guy thing), then here is what you do:

Take the empty roasting pan from which you have removed the turkey and drain all but ¼ cup or 60 ml of drippings from the pan.  Set the pan on 1 or 2 burners on low heat.

As the drippings heat up, pour ¼ cup or 60 ml of dry white wine on the drippings.  As the wine bubbles, use a wooden spoon to scrape up the bits at the bottom of the roasting pan.  Keep stirring as the wine reduces to a syrupy consistency.

Whisk in 1-½ cups or 375 ml of turkey stock and simmer until reduced by half.  This can take up to 20 minutes.

Combine 1 Tablespoon of all-purpose flour with 1 Tablespoon of butter into a roux or paste, and then gently whisk it into the roasting pan.  As you whisk, the gravy will thicken.

Taste and adjust seasonings. You can add salt, pepper, chopped thyme, lemon juice, more wine…or whatever your own inner Gravy Tsar tells you is a good idea.  If the gravy does not thicken, make more roux.

Finally, reduce the temperature in the oven to a low 140F or 60C and place any pies that need warming up in the oven.

All that remains is to dig in!

What’s on your Thanksgiving docket for this year?  Do you have any Very Russian Thanksgiving stories to share?  Hit the comment button below and share them with us!  Over the probki and through the metro, to babushka’s house we go…