Meatloaf is one of HRH’s favorite things and can you blame him? 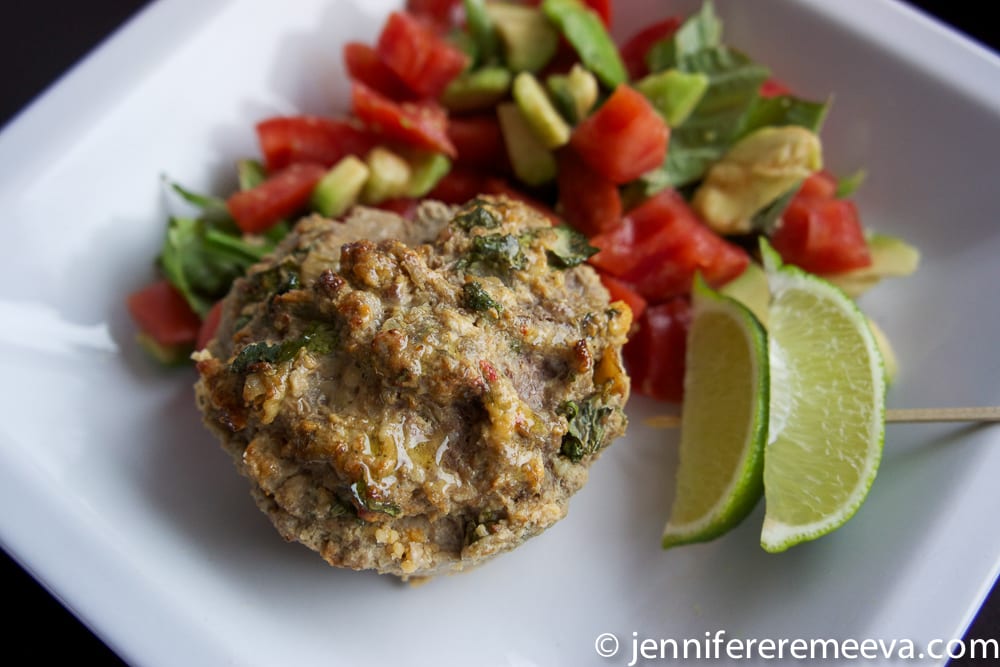 It’s the ultimate comfort food after a long, hard 17-hour slog down at the office.  And it’s not hard to make either, so it’s a great midweek staple.

The problem, of course, is that it is so very, very dull.

But it doesn’t have to be.

The light dawned over my marble head a few years ago, and I began to dig around the internet for some inspiration and you know what?  Next to cats and stuff, the internet is simply bursting with meatloaf.

Oddly enough, it turned out that a diner in New Orleans knew.  Luckily I caught a thirty-second tail of a Food Network show about a diner in Louisiana (again…who knew?) for me to fit all of the culinary puzzle pieces together.

What I was missing was heat.  And tang.

Chorizo and cilantro to the rescue!  I also came up with the idea of making the meatloaf in individual portions in a muffin tin, which helped cut down the cooking time, thus increasing the moisture.  I used the classic and very reliable techniques found in Meat and Spinach Loaf on page 524 of The Essential New York Times Cookbook: Classic Recipes for a New Century.

These tweaks made me feel less like June Cleaver and more like Gloria Pritchard, which is always a consummation devoutly to be wished.

The result pleases everyone!  Fresh cilantro and scallions spice up the mixture and give it the crunch ordinary meatloaf really misses.  Chorizo and pork team up with beef for a multi-layered flavor that is satisfyingly complex.  To lighten things up further, I serve these mini meatloaves with a tomato and avocado salsa and a citrusy yogurt sauce.

Sourcing the ingredients in Moscow:

Fresh cilantro (or coriander if you are British) is available at most supermarkets and farmers’ markets.

For the best quality ground beef and pork, I recommend Metro Cash & Carry or Azbukha Vkusa.

Download bi-lingual shopping lists to help you with Russian-English translation!

Some Moscovore recipes that would go very well with this dish:

Is your meatloaf getting you down?  Do you have a recipe you’ve spiced up and breathed new life into?  Tell us about it by hitting the comment button below!

Meatloaf isn’t the only thing you can make in a muffin tin! Try lasagne, timbale, mac & cheese, and all kinds of dishes that are just a little bit more interesting when served in smaller portions. I’ve found Muffin Tin Meal Recipes: The Complete Guide For Breakfast, Lunch, Dinner, and More (Every Day Recipes) to be a source of all kinds of inspiration!

Amanda Hesser famously asked New York Times readers to send in their “most batter-spattered, warped, and stained recipes” as she compiled this latest update to the Grey Lady’s culinary bible. The Essential New York Times Cookbook: Classic Recipes for a New Century contains classic American dishes and is one of my first stops when delving into the heart of a dish. It makes a wonderful birthday, graduation, or wedding gift.

Have Personality Disorder, Will Rule Russia: A Concise History of Russia

I’m also delighted to announce the much-anticipated release of the companion piece to Lenin Lives Next Door: Marriage, Martinis, and Mayhem in Moscow

“You should imagine Russian history,” suggests American writer and veteran expatriate, Jennifer Eremeeva, “on a huge, 3D IMAX screen, surround sound booming with a jumbo bucket of popcorn in your lap and huge blue drink at your side.” Eremeeva should know: she became fascinated with Russian history at the age of thirteen, when she plucked a copy of Robert Massie’s Nicholas and Alexandra off the school library shelves. “And I don’t think it is over the top to say that my life was set on a new course.”

Three decades later, Eremeeva found herself living in Moscow, married to HRH, her “Handsome Russian Husband,” (although there are days when she secretly refers to him as her “Horrible Russian Husband,”) and writing her first book, Lenin Lives Next Door: Marriage, Martinis, and Mayhem in Moscow. As she explored what she calls “the lighter, funnier side of this big, messy country,” Eremeeva penned her own tongue-in-cheek version of the country’s turbulent and colorful history: Have Personality Disorder, Will Rule Russia: A Concise History of Russia as a companion piece to Lenin Lives Next Door:

As a former tour guide and Ivy League-educated historian, Eremeeva is an expert in making Russia’s history both entertaining and digestible to non-academics. She strolls expertly but lightly through her material, tracing the winning formula for Russia’s effective rulers back to the Tatar Mongols, revealing why Ivan was not so Terrible, Catherine was totally awesome, and why Peter the Great and Stalin would never ever tweet or Instagram anything. Eremeeva helps us peek inside Empress Elizabeth’s baroque boudoir, deconstructs Gorbachev’s curiously split personality, and shows us exactly where the bodies are buried (Peter and Paul Fortress and the Archangel Michael Cathedral, of course.) Eremeeva’s unique fusion of humor and history, and inimitable writing style brings the enigma that is Russia into hilarious focus in this compact and highly readable guide to thirteen centuries of Russian history.

Fans of Eremeeva’s blogs, columns, and her full-length book, Lenin Lives Next Door: Marriage, Martinis, and Mayhem in Moscoware sure to enjoy this further exploration of Russia’s soft and hilarious underbelly. For readers embarking on a visit to Russia or an exploration of the country’s rich literature and culture, Have Personality Disorder, Will Rule Russia offers a succinct, informative, and highly entertaining introduction to the country’s complex and expansive history.