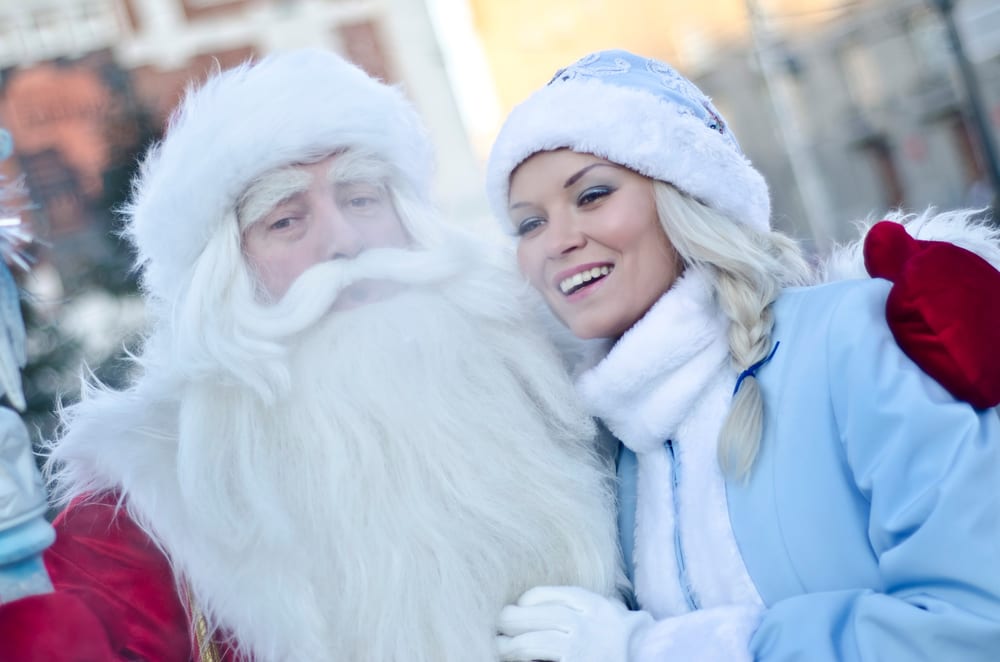 This is a huge big deal: way more important than any of the naval fleets, or the cryptographers, or even my buddies who jump out of parachutes because Grandfather Frost is Russia’s Santa Claus!

I know…I know, trust the Russians to have their own Santa Claus.  But since they have their own calendar, alphabet, and Olympics – why should Santa be any different.

Dyed Moroz lives further south than Santa – in Velikii Ustyug, the heart of Russia’s dairy belt along the Volga River.  In medieval times, Velikii – or Great — Ustyug was a principality of great importance and a major trade hub.  Today, it’s on the map as Dyed Moroz’s hometown, which was made official in 1999.   I would love to see the legislation, wouldn’t you?   Presumably, as a Russian citizen, Dyed Moroz votes for United Russia and, like all other Russians is currently trying to come up with a name for Vladimir Putin’s new dog.

In appearance, Dyed Moroz is longer and leaner than Santa, more Slavic and sterner, no doubt because he is the elder of the two:  Dyed Moroz is more than 2000 years old, while Santa Claus, who was born the Greek Nikolaos of Myra is only 1740 years old, or, as my friend Judy pointed out, perhaps much much younger – only 187, if you, like Judy, attribute Santa’s emergence as a brand from the publication of “The Night Before Christmas” in 1823.   Not being the patron saint of sailors, thieves, merchants, archers and children, Dyed Moroz lacks the kind of infrastructure Santa has built up:  he has no elves, no workshop, and no Mrs. Claus to help him out.  He does have one helpmate – his granddaughter, Sneguritchka, or Snowflake, a classic Russian beauty, who is traditionally dressed in an ornate blue Russian sarafan.  Together, they make personal appearances in the run-up to New Year’s Eve to hand out presents, which means that children all over Russia actually get to meet the great man.  I don’t know why they feel they can drop the veil like this, but it may have something to do with the fact that Dyed Moroz doesn’t have the kind of transport, which Santa does.   There is no sleigh, no reindeer, and certainly no Rudolf to help guide the sleigh when the weather gets bad, as it so often does in Russia.  “America,” Dyed Moroz must sigh, as all Russians do when contemplating the ease and comfort of our life compared to the hardships of life in Russia.

He sees you when you’re sleeping,

He knows when you’re awake

He knows when you’ve been bad or good,

So be good for goodness sake

The lack of transport also accounts for the fact that Dyed Moroz runs 6 days behind Santa, coming, as he does, on December 31st rather than December 24th.   This is a holdover from the Soviet period when the Russians replaced the Christian Christmas with secular New Years.  For a while, Stalin tried to even outlaw Dyed Moroz, declaring him in 1928 “an ally of the priest and kulak.”  Certainly, there have been moments in Russia’s history (and there may well be more ahead) when the concept of “he sees you when you’re sleeping, he knows when you’re awake, he knows if you’ve been bad or good,” might be less than a desirable state of affairs. But, even Stalin (the Burgermeister and Heatmiser of his day) can’t keep the likes of Dyed Moroz down for long.  Dyed Moroz was rehabilitated in 1937 – though with one important wardrobe change:  during the Soviet period, he and Sneguritchka wore blue fur trimmed outfits, as opposed to red so that Russian children would not confuse them with Santa Claus.

On November 18th, each town in Russia opens a ceremonial mailbox for Dyed Moroz, and he receives official (really – official) delegations from all over Russia.  Instead of writing letters explaining that they’ve been nice, not naughty, and a lengthy list of Christmas wishes, Russian children wish Dyed Moroz a Happy Birthday and then move on to the lengthy list of New Year’s Wishes!

So, if you are in Russia today, be sure to drop Dyed Moroz a line to wish him a very Happy Birthday!

Let me know, won’t you, by hitting the comment button below and leaving me some ideas.