Trying to get some Face Time with HRH 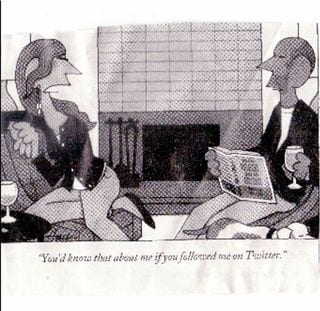 I taped a New Yorker cartoon to my Handsome Russian Husband’s (HRH) side of the mirror the other day.  The cartoon depicted a classic sophisticated couple seated in a well-appointed living room.  The caption read “You’d know that about me if you followed me on Twitter.”  This was my somewhat desperate attempt to send to two subtle messages his way:  1.) I’d like him to once and a while read my blog (which I know he never ever does because I’ve deliberately planted stuff in there, which would outrage him if he did) and 2.) I’d actually like to see more of him in general since he works from 7 a.m. to 11 pm at his Big Important Job at the Difficult Start-Up in An Important Industry.

Twitter has been on HRH’s mind lately.  He doesn’t follow anyone on Twitter, he has no friends on Facebook, and he deeply regrets his one foray on to the Russian version of “Classmates.com” odnoklassniki.ru (which is responsible for one in four marriages breaking up in Russia) since it clogs up his email and he gets inundated with requests for jobs at The Difficult Start-Up from people he hasn’t seen since 5th Grade.   He thinks Tumblrs are for beer at the end of a long hard day, and Hoot Suite is something owls do.  In the Social Networking terms, he’s North Korea.

Twitter, though, is something he thinks may be in his future.

“You have to teach me to Tveeter,” he remarked one evening.

“Why do you want to tweet?” I asked.  HRH’s Difficult Start Up at the Important Industry doesn’t seem to lend itself to being buzzed.  Quite the opposite.

“I’m getting an iPad,” HRH explained, “So I have to Tveeter, right?”

“That is the outside of enough!” I fumed.  I yearn for an iPad, and I resist purchasing one with ever fiber of my being.  Tool, not toy, I told Velvet, our 13-year-old who feels her life will be ruined until we let her upgrade her current iPhone3 to an iPhone 4.  “What will you do with an iPad?” I yelled.  “You don’t even know how to Google!”

“I think I do,” said HRH, “Dmitry Medvedev has an iPad…and he tweets.”

The fog cleared.  For the last six months or so, President Medvedev has been pictured at Cabinet Minister pow wows tenderly caressing his tablet and gently scrolling through his power point presentations on his iPad, while all the Soviet era Ministers scribble in their cheesy leatherette A5 notebooks with things like Gazprom embossed on them.  You could follow one role model (young, hip, liberal) or the other (old school, conservative, safe.)  Putin, it occurred to me, never writes anything down, and certainly didn’t toggle or scroll any device when he spoke publically.

“Yes,” I said, “Medvedev does, though he still refuses to follow me, even though I follow him.  But an iPad is one thing, and Twitter is a completely different thing.  The two things are mutually exclusive.”

“It’s like this,” I explained, “You condense something you want to say into 140 characters and you send it out to your followers.”

“And then,” I said, “you can build your follower group by adding hashtags to keywords, and everyone who is following that hashtag will see your tweet.

We continued in this vein for some time, covering trending, re-tweets, following Friday and other salient aspects of Twitter.  HRH said the whole thing sounded like a huge waste of time.

“Darling,” I finally said, exasperated, “I don’t think you are a natural born Tweeter.  Your primary method of communication is to yell at people on your mobile phone.  With Twitter, you need to have followers.  Where are you going to get followers, anyway?  From that Red Director crowd, you hang out with?”

“I have subordinates,” he argued.

“So you don’t need to Tweet,” I finished with a flourish, “but if you got me an iPad as well, we could FaceTime while you are at work.”

“I told you,” HRH said angrily, “I’m not going on that site again. It’s responsible for one in four break up of marriages in Russia.”

This piece first appeared in The Washington Post on June 29, 2011.

The cartoon pictured above was pulled down off the bathroom wall after I ripped it out of The New Yorker where it first appeared.  Obviously, a little water logged.

Do you have an iPad?  do you love it?  What do you use your iPad for?  Tool or Toy?  I want to know!  Hit the comment button and leave some ideas!