By Jennifer EremeevaJanuary 2, 2016May 30th, 2017Lifestyle, Russia
One Comment

I couldn’t be more excited about the upcoming drama series of Tolstoy’s War and Peace, which starts on January 3, 2016 in the UK! What a great way to get the year off to a perfect start! 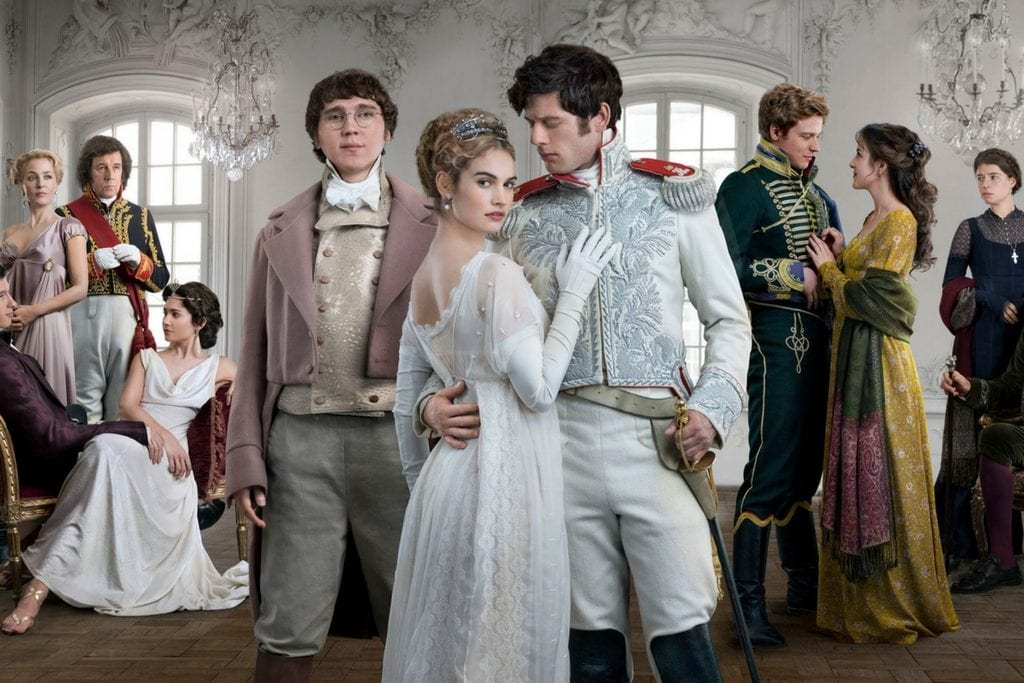 I love Tolstoy and I love British TV, particularly anything that my favorite “sex-it-up” screenplay adapter Andrew Davies does! Hey, this is the guy who imagined Colin Firth coming out of the pond in just the see-through shirt — of course, I’m panting to see what he does to War and Peace.

So for me, this is a slam dunk. I’m counting the hours and minutes to the debut of War and Peace, and you should be too!

Here’s a trailer for the series, that looks set to redress some (but never all) of our Downton Abbey withdrawal symptoms (that’s if you are in the UK or own a VPN — Americans get Downton Abbey at the beginning of January.)

Yes, that’s Downton’s Lady Rose — a.k.a Lily James there, playing Natasha Rostova, which to my way of thinking is excellent casting if poor hair and makeup. Natasha is meant to be dark, dark, dark.  We will also see James Norton (of Granchester) as Prince Andrei and Paul Dano (12 Years a Slave) as Pierre Bezukhov. I’m a little concerned that Pierre and Andrei seem a bit young — call me picky, but I think Pierre Bezukhov needs to look old enough to shave. But I’m prepared to be convinced otherwise, and I’m really looking forward to seeing some of my other favorite actors: Gillian Anderson as Anna Pavlovna, Jack Lowden as Nikolai Rostov, Greta Scacchi as Countess Rostova, Mr. Selfridge’s Aisling Loftus as the long-suffering Sonya, and the incomparable Jim Broadbent as Prince Bolkonsky!  All great parts for these wonderful actors.

For the uninitiated and perhaps the slightly intimidated:

This blockbuster novel by Leo Tolstoy, published in 1869, follows the fortunes of five primary or what George R.R. Martin might call “point of view characters” from two principal families, as well as a cast of hundreds of minor characters. The action is set in Russia — in both capital cities, Moscow, and St. Petersburg, on several country estates and on the battlefields of Europe.  The action begins in 1805 and takes us through the Napoleonic wars, ending in 1825.

Who’s Who in War and Peace – A Cheat Sheet

One of the major stumbling blocks to reading War and Peace we hear is, “everyone has three names!” This is true, and you can read a longer explanation as to why that is in Lenin Lives Next Door. That being said, to wade into the narrative initially, you really only need to worry about our five primary characters. Once you have these straight, I guarantee you should be well and truly hooked: enough to begin to care enough to sort out the other three families and four thousand other characters. 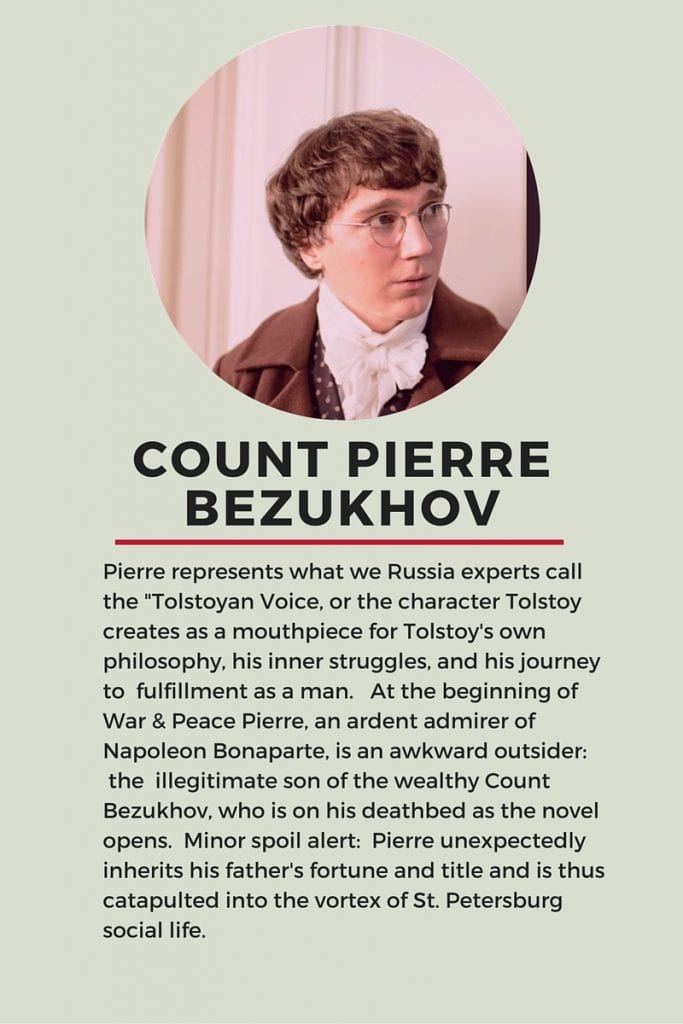 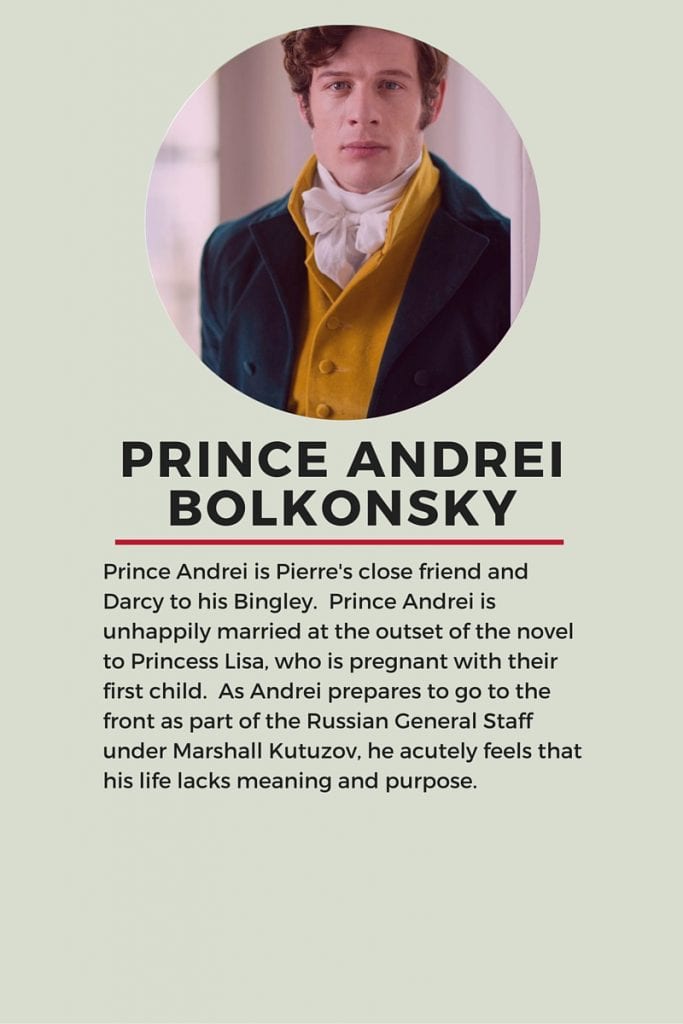 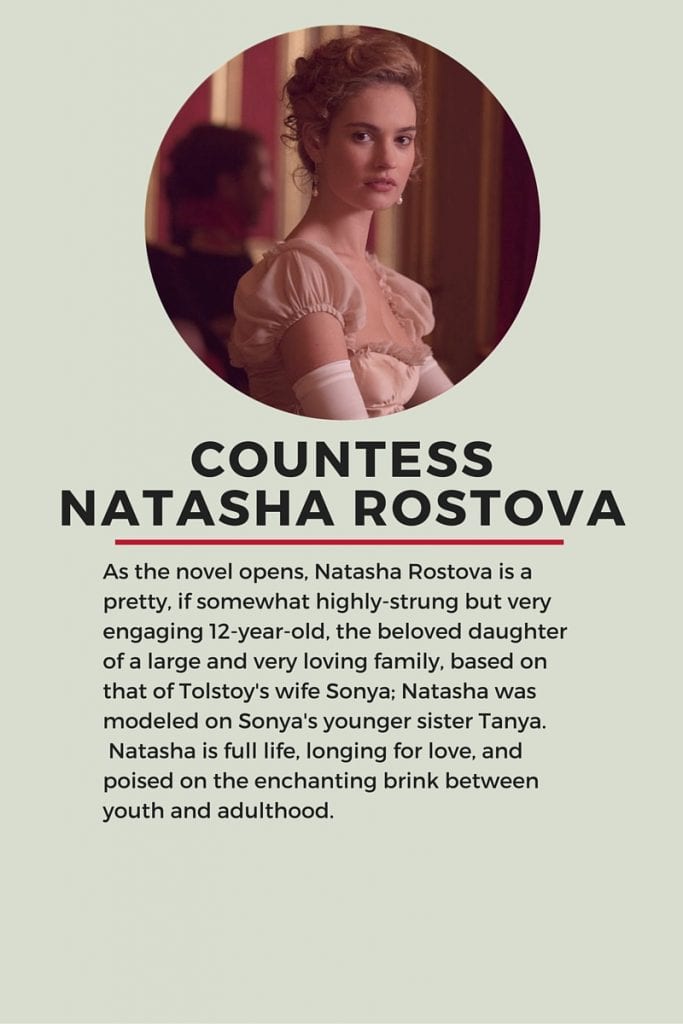 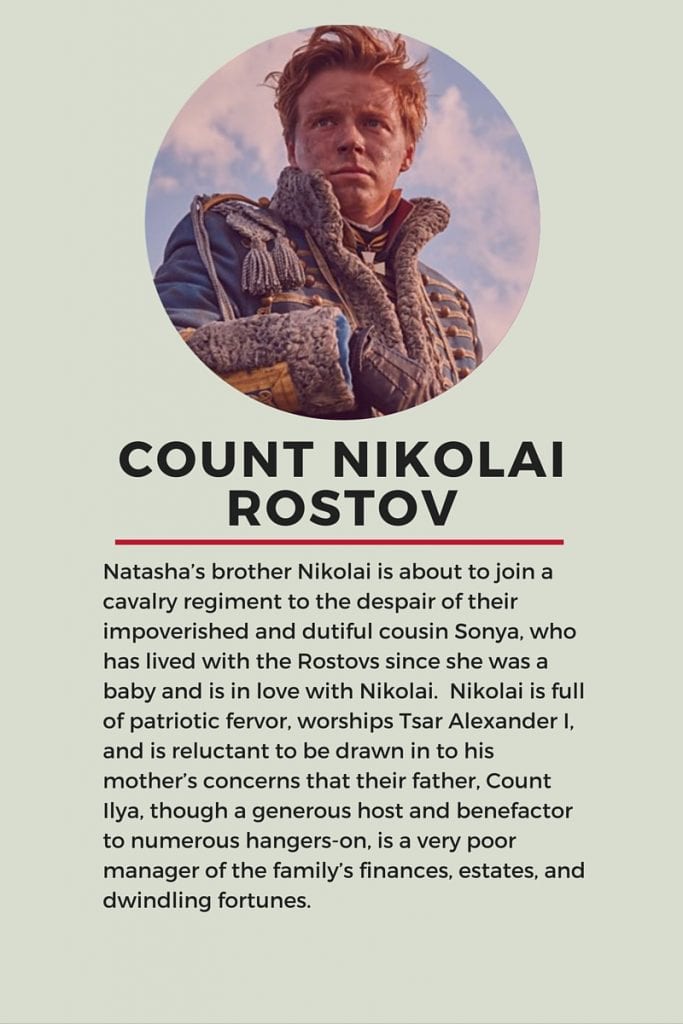 A host of minor characters who populate subplot lines are masterfully woven together with real historical events and figures to make up this epic, sprawling novel that one can read again and again and always find something new.

Why did Tolstoy Write War and Peace?

Tolstoy’s family, the Volkonskys were part of the Decembrist Uprising in 1825 – when  a group of aristocratic officers who had fought in the Napoleonic Wars protested the ascension of Tsar Nicholas I.

In my Russian history primer, Have Personality Disorder, Will Rule Russia, I said this about the Decembrist uprising:

ALEXANDER I DIED IN 1825, CHI LDLESS. HIS ELDEST brother, Constantine, well-known for his liberal sympathies, was passed over in favor of the next brother, Nicholas, an archconservative. This succession hiccup was legal and correct because Constantine had earlier abdicated his right to the throne when he contracted a morganatic marriage to a commoner, a fact not widely known outside intimate court circles. In December of 1825, the announcement of Nicholas’s succession caused outrage, and a handful of idealistic officers organized a mass protest, largely consisting of their decommissioned soldiers. Gathering in Senate Square, the crowd, coached by their officers, called for “Konstantin i konstitutsia!” or “Constantine and a constitution!” Many accounts claim that the soldiers had no idea what they were protesting about and believed that konstitutsia was Constantine’s commoner wife. Nicholas’s response was swift and harsh. The ringleaders, christened the “Decembrists,” were thrown into the Peter and Paul Fortress, stripped of their titles and possessions, then exiled to Siberia. Many of their wives chose to follow them into exile, which greatly enhanced the sympathies of the intelligentsia—writers and thinkers like the poet Alexander Pushkin—who began to weave themes of Russia’s politics into their essays and novels. The Decembrist Uprising was a failure, but a tiny spark of revolution had been ignited. Carefully fanned by two generations of increasingly radical revolutionaries, it would catch, flame, and ultimately rage out of control.

It was actually the Decembrist uprising — a truly seminal event in Russia’s history — that Tolstoy wanted to explore in the novel he originally imagined would explain why the Decembrists had taken the action they did, but he found he had to go back to the Napoleonic Wars to really get to grips with the issues that led to the uprising.

As a writer embarking on writing a historical novel, this makes a lot of sense to me, but it might just represent the biggest overdo in research ever.

Never mind!  What emerges is a masterpiece. Trust me! War and Peace draws you in from the minute you enter Anna Pavlovna’s salon to the very end when all the threads are tied up.

Next Up:  Tune in next week to learn what to say at a cocktail party to sound very smart about War and Peace. To be sure you don’t miss it, subscribe to this blog to receive updates! 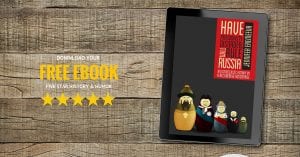 Readers, are you geared up for War and Peace?  What’s your take on Tolstoy’s great epic?  Have you seen other versions of it?  Have you read the novel?  Weigh in by hitting the comment button below!