Today is Day of the Workers of the Ocean and River Fleets!

“Again?” I hear you cry, “Haven’t we had a lot of aquatic holidays of late:  four naval fleets and that fountain hopping holiday?”

Since we’ve gone into a certain amount of detail about Russia’s four naval fleets:  The Black Sea, The Northern, The Baltic, and the Pacific Fleets, I thought we’d focus a little bit on Russia’s lesser known, but equally important river fleets.

Any course, book, or podcast on Russian History will begin with the geography, with much stress on two things: the lack of a natural boundary from the Danube River to the Ural Mountains, which explains the shifting borders; and the importance in early Russian history of the North-South communication provided by the Dnieper (now no longer part of Russia) and the Volga Rivers.   Other Russian rivers played their parts in Russia’s history: the settlements of Cossacks on the banks of the Don River, expansion and exploration in the east along the Amur, the Lena (from whence Lenin took his Nom du Guerre) theYenisei, the Angara and the Ob.

Landlocked Moscow is actually the port of five seas, thanks to one of those impressive building projects of the 1930s:  the Moscow Canal.  This impressive feat of engineering connects the Moskva River from Tushino in the northwest of Moscow up to the mighty Volga River some 128 kilometers, through a series of locks, and thus provides access the White, Baltic, Black, and Caspian Seas, as well as The Sea of Azov. 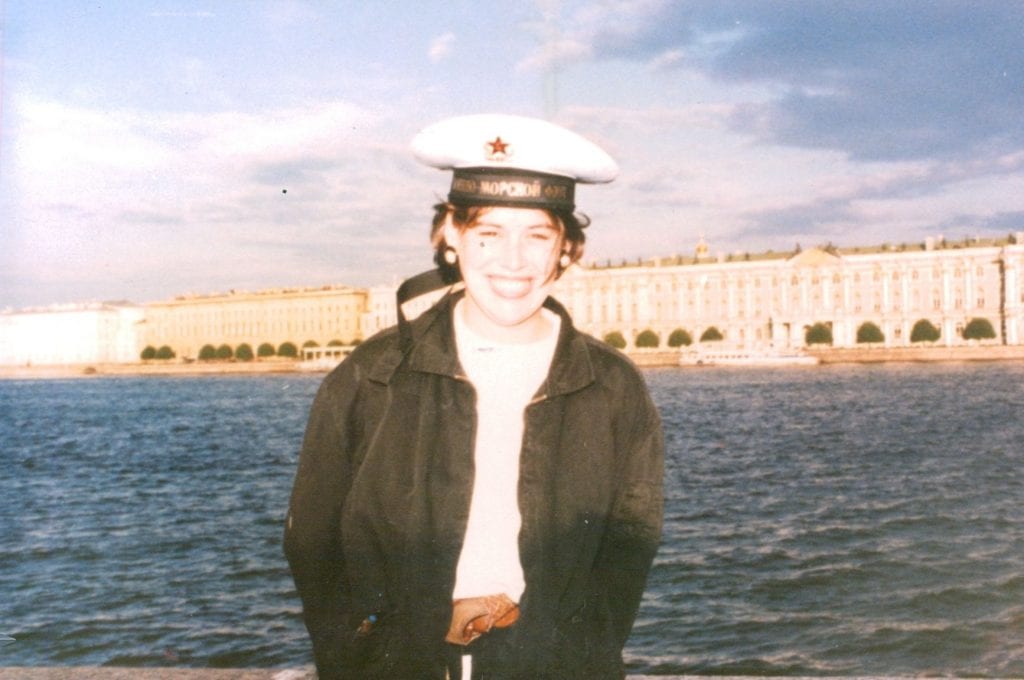 Your intrepid author on the Neva River circa 1989

I spent a lot of time on the Volga River, during my misspent youth as a tour guide, and later Head of Customer Service, and, although my memories of it are primarily dominated by the lack of air-conditioned buses, a really unpleasant and inept (never a great combination) Cruise Manager who was someone’s son, having to work for Serbs (which I never want to do again), really horrific food, and mosquitoes the size of pigeons, I would still tell you that, if you are a paying customer, a river cruise is the very best way to see Russia.

They Don’t Want To Hear it From a Foreign Girl

I wrote in an earlier post about the bizarre three days I spent on a river cruise as a guest (and I use that term loosely, since we were largely ignored) by Russia’s National Tourist Organization (not it’s real name), and, perhaps as a result of that meeting, I got my name on some list, and soon after was summoned to a large dingy building on New Arbat Street, up twelve or thirteen floors in a very dodgy lift to meet with some Deputy Director of Moscow’s City Government Tourism Development Organ, who was called Maxim (they are always called Maxim) who said he would be very happy to listen to all of my ideas for making Moscow a better place for tourism.   He got out his cheesy leatherette A5 Diary, which they all use to write down this kind of thing, and looked at me with anticipation.

“Move the Kremlin, Pushkin Museum, and Novodeyvichy Convent to Saint Petersburg and close up shop,” was honestly the first thing that came into my mind, but the Muscovites get tetchy about this kind of thing.  I decided, instead, to plug for much-needed improvements to the infrastructure of the River Cruise program, suggesting that the Moscow River Station, a marvelous and completely empty 1930s building with colonnaded terraces, marble floors, mosaic ceilings and marvelous views over the river, could be furnished with a few more amenities.
“Such as…?” prompted Maxim.

“Well,” I said, “Perhaps a bank of international phones, maybe a fax machine (this was 1999), or something…since you have almost 10,000 foreigners passing through there each month and no other way to be in touch along the 7-day cruise.”

He wrote that down.

“And maybe…” I continued, “a store with some souvenirs, books, maps, and snacks…like perhaps bottled water and soda,”

“Soda, good,” he nodded and wrote that down.

“Handicapped access might be improved,” I proposed, “since most of the people on these cruises are over 70.”

He shook his head, “That is a Federal problem,” he said, “We are Municipal” (this was pre-Putin when people still said things like that).

“A coffee shop?” I ventured. He squinted at me in confusion. “Or a bar,” I amended he nodded and smiled.

“And possibly a water taxi to the center of town?”

We continued in this vein for some time, and then I got in the dodgy lift and rattled down to the ground floor. I never saw Maxim again. I’m happy to say that some of these measures were put in place, some are still being considered.  I never got a thank you note or anything, but I feel I played my part.

And I didn’t have to go up that elevator ever again.