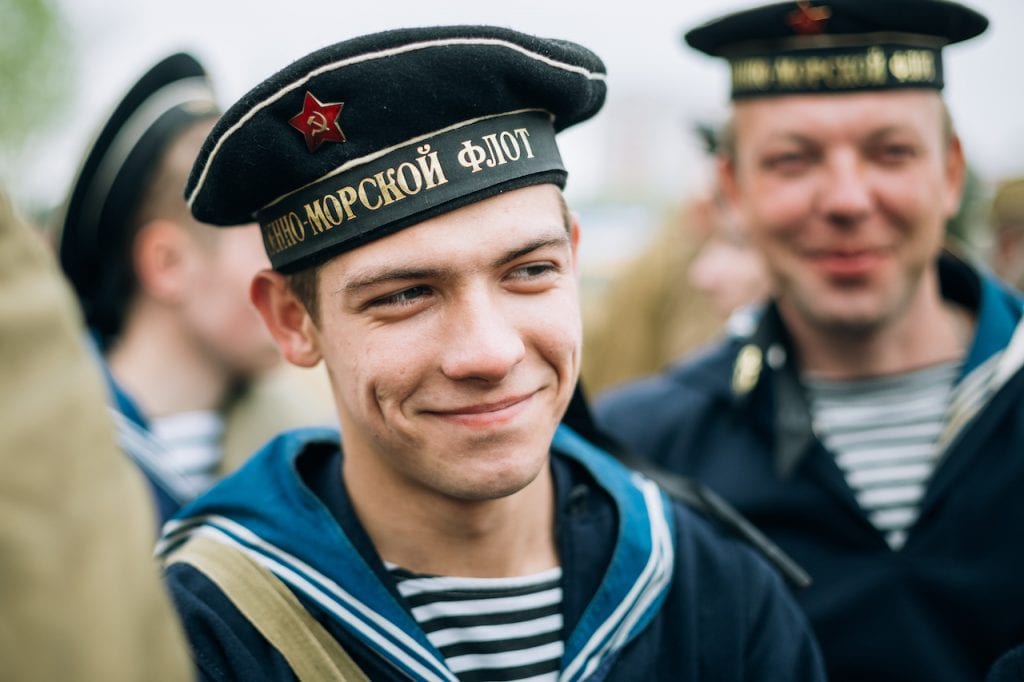 Put on your party hats, let’s play pin the tail on the submarine because the Northern Fleet is the baby of our bunch.    Construction of a northern naval base was begun under Nicholas II in 1895, but like so many things started by Nicholas II, it was left to Josef Stalin to finish it off.  The Northern Fleet considers its founding dates to a visit to the Zapolarniy (meaning just below the Pole), in 1933, which makes it 77 years old today.

Young, they may be, but the Northern Fleet has distinguished itself as a formidable force, winning numerous battles in the Great Patriotic War and the recent unpleasantness with Chechnya. It is, however, their continued ability to literally make me wave a white flag of surrender each June that is the subject of today’s post.

HRH, who went to military school and served as an officer until 1991, has a bunch of friends who are still actively serving in branches of Russia’s military, all over the country.  We see a lot of some of them, and less of others, but summer is always ushered in by the simultaneous arrival of Borya from Zapolyarniy and the pukh.

Pukh, (pronounced “pooo-kuh”) which fellow blogger Potty Mommy described very well in a recent post, is the fluff from a sexually frustrated female poplar tree.   After World War II, Russian authorities hastened to make Moscow green again, by planting a lot of poplar trees.  It was one of those moments when the people who knew better were afraid to speak up, and so the authorities planted only female trees.  Poplars, like holly, are both male and female, and you need a few of each to keep the others happy.  Moscow has only female trees, which each June release their snowflake-like pods into the atmosphere where they swirl and whirl in a summer snowstorm, like a million Carrie Bradshaws looking for Mr. Big.  Muscovites rush to close their windows since the pukh gets into nooks and crannies, wily evades the vacuum cleaner, the broom, and the duster.  It creeps into your nostrils and down your throat.  You find it lurking in corners, and if you are at all prone to allergies, you don’t even go outside until the week or so passes.

As soon as the first bit of pukh sails through the air, HRH announces that Borya is on his way down to from Zapolyarniy and will be staying a few days.

It was one of those moments when the people who knew better were afraid to speak up, and so the authorities planted only female trees.

I have learned that, in the case of HRH’s friends, it is better not to lead with polite chitchat about their work, such as “So, Borya, how goes it with the Northern Fleet?”   Though we’ve not discussed it, this is what I assume Borya does for a living, and one does not need to be the Head of the CIA to work that out.  The clues are there:  the naval tank top, the fact that he hails from Zapolyariny: apart from the Naval Base, there isn’t a lot else going on. There isn’t, for example, an IKEA at Zapolyarniy, despite its relative proximity to Sweden.   Then there is the final and clinching evidence: Borya enjoys an annual summer vacation of forty days.

That’s right, forty days.  People who work for the government in Russia, who live above a certain latitude (and Zapolyarniy is so far north that it tends to be obscured on any globe by the knob one uses to rotate the globe) get a government subsidized vacation of obscene length to the Black Sea resort areas of Russia: the theory being that they need to soak up the vital vitamins contained in the sun’s healing rays.  So down they go, unencumbered by sun hats or sunscreen, to lie flat on their backs, turn beet red, and gorge themselves on fresh fruit and sweet Crimean champagne.  Borya had stopped off in Moscow en route from Zapolyarniy to Sochi to change trains and catch up with some of his childhood friends.

That first year, I had just started working at The Bank and was putting in 15-hour days trying to figure out the difference between Fixed Income and Asset Management.   Nevertheless, when HRH told me his friend would be arriving for dinner, I spent some time the night before to make what I thought was a good menu for a scorching June evening:  gazpacho and raspberry chicken salad. I left two bottles of wine chilling in the fridge, emptied the ice trays into precious zip lock bags and refilled them.  The next morning, I extracted a promise from HRH that he would shut all the windows against the pukh and buy whatever staggeringly large amount of beer he felt was appropriate, grabbed my coffee mug and headed into the pukh maelstrom.

Fast-forward fifteen hours.  Tired and limp in my crinkled linen suit, I dug my car out of pukh spores, climbed in and cranked up the air-conditioning.  Switching on a book on tape, I eased into the evening Moscow gridlock, looking forward to a cool shower and the nice dinner I’d prepared.

I opened the door of our flat and was flattened by a gust of hot air and a cloud of pukh that immediately settled in my inner ears and nostrils with the precision of a Murmansk nuclear submarine.  But the overwhelming sensation was one of affixation by a lethal combination of dried fish, flat beer and human sweat.

HRH poked his head around the living room door.

“Hi Sweetie!” he said, “Come on in and meet Borya!”  He enveloped me in a clammy, shirtless embrace.

The shirtless thing is one of the first hurdles you face making your marriage to an HRH work.  You have To Be Very Firm about that not being acceptable outside the bedroom, or before you know it, there will be a coterie of nearly naked men in your living room. Like not in a good way.

Guests, like fish, begin to smell after three days.

Which is what I had that night.  Resplendent in only a pair of Turkish tracksuit bottoms, hunched over a coffee table spread with newspaper and what looked like most of last month’s catch-of-the-day from Murmansk, sat Borya, his round face shining with sweat.  With some difficulty, he focused his Windex-colored eyes on me disapprovingly, making a “tsk tsk tsk” noise with his tongue and shook his head.

“What time do you call this?” he shouted over the boom of the television, tuned to Russian MTV.

I didn’t know him from Adam.

I wondered if it was a trick question and consulted my watch as I picked up the remote control for the air-conditioner.

“Not any time for a woman to be getting home from work,” boomed Borya, “I don’t let my women come home at this time.”

“I see,” I said, moving towards the window to shut it.  HRH bounded over the coffee table to stop me.

“Borya is concerned about getting sick from the air-conditioner…the breeze,” he explained.

“But it’s like 92 degrees and the pukh is everywhere,” I said in English.

HRH gave me one of those Slavic shrugs that speak volumes.  Wordlessly, I retreated to the kitchen, opened the fridge and poured myself a hefty glass of the chilled wine, adding a few of the untouched ice cubes (also very bad for your health) for good measure.  After a long cold shower and another glass of wine, I cranked up the a/c in my bedroom, pulled a Nancy Mitford book down and climbed into bed wearily.

I am no match for the Northern Fleet.

Congratulations to Vice-Admiral Nikolai Mikhailovich Maksimov and all those who serve under him!

Be honest, men shouldn’t go shirtless in the public areas of the domicile, should they?   Have you ever come home to find an impromptu male bonding thing going on?  What did you do?  Leave a comment and tell us about it!