Today is Fishermen’s Day in Russia! 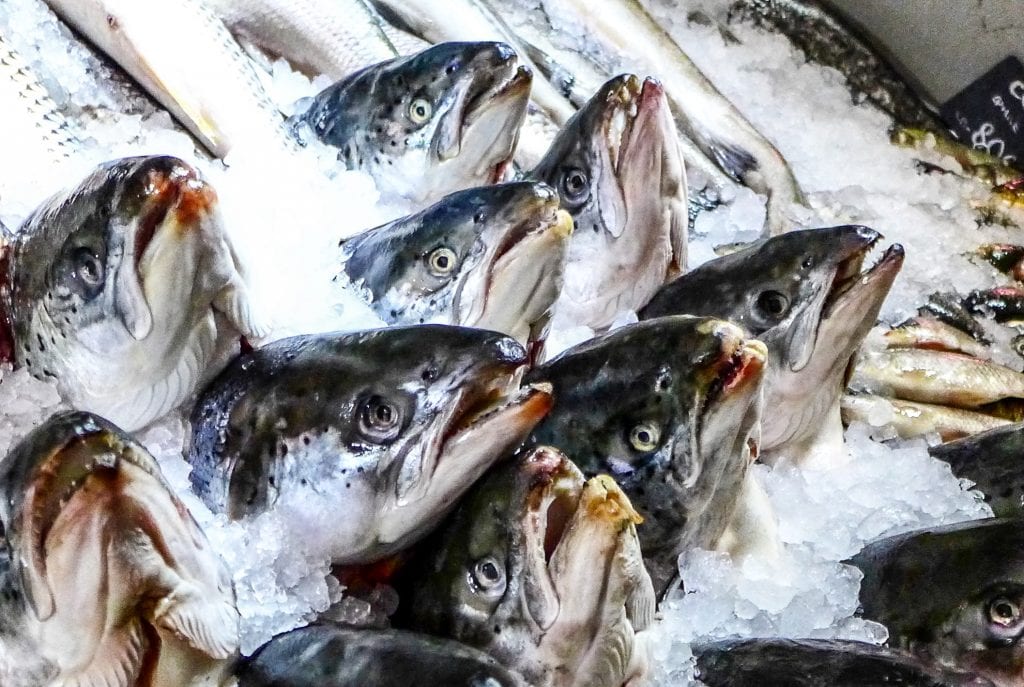 Fishing and Fishermen in Russia

Today we are feting not just those who go out to their local watering hole with a rod or a reel for a quiet afternoon’s nap, but all those who trawl Russia’s 12 seas, 2 million rivers and 3 oceans to haul in catches of over 3 million tons of fish annually, making Russia one of the world’s top ten producers of fish.

Fishing and fish remind me of an unfortunate evening last summer when I felt that I was truly stuck in a bizarre time warp.  American friends of a cousin were over in Moscow for a large medical conference.  They roped me into a dinner at some out-of-the-way restaurant, called, ominously (and I suspect not ironically) “The Collective Farm” organized by some of their fellow delegates: a 50-something surgeon called Rostislav Dmitrievich, and his wife Tatiana Ivanovna, who were stiff, formal and old-fashioned.

Memories of Fish Dinners Past

I was late, having come on from a meeting with my editor, and a good thing too, since I missed the first course: a lavish spread of traditional Russian zakuska: pickled mushrooms, pickled fish, pickled cucumbers, pickled garlic, and pickled diners, if their flushed cheeks and the half empty vodka bottle were anything to go by.  The zakuska also featured the mandatory stale slices of brown bread, curling slightly at the ends, and a warm viscous homemade cranberry juice, which tastes like cough syrup, called “kliukva” and sulphurous mineral water from the Caucuses which tastes like rotten eggs.

Fishing is boring, unless you catch an actual fish, and then it is disgusting.

It was like an express train back to the late 1980s: during my misspent youth as a tour guide, I’d had that same meal from Tallinn to Tomsk a thousand times.  It came as no surprise to me that the next course was mushroom julienne: a glutinous concoction of sour cream, mushrooms, salt, and cheese, which I had no doubt was more cholesterol than my cousin’s friends had consumed in the last month.  Then we moved on to blini and (red) caviar, which everyone pretended was a massive treat. Then, tough, inedible beef (possibly the only red meat the doctors had consumed in this century) finishing up with melting ice cream.

Smoked Salmon Makes it All Worth It

“What has been the most…the most amazing thing about living in Russia for 17 years,” asked the lady doctor in a desperate attempt to force conversation during one of the numerous deeply awkward lulls.

“Affordable smoked salmon,” I answered promptly, which made everyone laugh for some reason.
I wasn’t completely kidding when I said that affordable smoked salmon is one of the highlights of living in Moscow…it is fantastic, although you buy it in chunks, rather than fillets, unless you go to the market yourself and are firm with the salespeople about how you would like it sliced (which if you are like me is thinly).   They don’t tend to want to hear it from a girl, since fish is another one of those things, like shashlik, that is a predominately guy thing.

Like the dried fish Borya from Zapolyarniy was kind enough to bring with him.  Guys, for example, have a charming tradition of buying live crawfish (pictured below) boiling up a large pot of water and…well…I’m sure you can imagine the rest.   Another fishy male bonding ritual is simply called “shrimp.”  For “shrimp,” conditions are ideal if there is a major sporting event on television and all the women in the house have been banished elsewhere.   Donning blue and white striped naval undershirts, the men spread newspaper over a coffee table in front of the television, boil shrimp in their shells, then spend the evening peeling, eating, and spitting out the hulls with copious amounts of beer.  No cocktail sauce or anything.  My freezer in Moscow is full of bags of these unshelled shrimp.

Then, there is caviar (which they prefer you don’t photograph:) HRH claims he was force fed black caviar as a child on the basis of its high protein count.   When I first lived in Russia, we used to get a lot of from HRH’s colleagues in Astrakhan (and the less said about HRH’s colleagues from Astrakhan the better): like a whole kilo, which we would open and spoon straight from the tin, although I occasionally made an effort to do the thing properly: toast, some chopped hard-boiled egg, a little onion to bring out the flavor, and a dash of lemon juice, which is not the way the Russians do it.  They serve caviar with sour cream and blini, which if you ask me (and no one ever ever ever does) is like taking a perfect vine-ripened tomato and dumping half a bottle of Stop & Shop French Dressing on it.