Day of the Constitution of the Russian Government/День Конституции Российской Федерации: We, the multinational people

Today is Constitution Day in Russia! 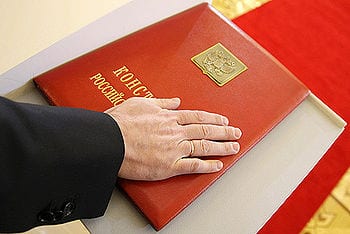 On this day, December 12, 1993, the Constitution of the Russian Federation was adopted by a Referendum and has been the legal foundation for the country ever since.

It always makes me laugh when I listen to the Glenn Beck/Sarah Palin worshippers defend leaving Health Care the way it is by saying things like, “We don’t want no socialism like they have over in Russia.”  They also say things like “Government, keep your hands off my Medicare,” but that is less germane to talking about Russia, which is, of course, a constitutional democracy, with elected officials who run the country.  This always blows people away for some reason.

The current Russian Constitution is the second of the country’s turbulent history and replaced the Soviet Constitution dating back to 1918.   There was an attempt back in 1825 to get a Constitution, known as “The Decembrist Uprising,” in which a number of well-born nobles were upset when Alexander I died and named as his successor his younger brother Nicholas and not the elder, Constantine.   Nicholas was known to be a conservative, while Constantine favored adopting measures to make Russia a less authoritarian country.  Unbeknownst to the populace, Constantine had also renounced his claim to the throne when he made a morganatic marriage to a woman of common birth who did not meet the rigid criteria for Russian royal brides.

We, the multinational people of the Russian Federation, united by a common destiny on our land, asserting human rights and liberties, civil peace and accord, preserving the historic unity of the state, proceeding from the commonly recognized principles of equality and self-determination of the peoples honoring the memory of our ancestors, who have passed on to us love of and respect for our homeland and faith in good and justice, reviving the sovereign statehood of Russia and asserting its immutable democratic foundations, striving to secure the wellbeing and prosperity of Russia and proceeding from a sense of responsibility for our homeland before the present and future generations, and being aware of ourselves as part of the world community, hereby approve the Constitution of the Russian Federation.

~The Russian Constitution, The Preamble

The nobles and officers leading the uprising rallied 3000 supporters near the building of the Russian Senate on December 14 (December 26 New Style) and called for “Constantine and a Constitution!” which in Russian sounds like “Constantin i Constitutsia,” and many of the regular soldiers thought that Constitutsia was Constantine’s morganatic wife.   The rebellion was crushed and its leaders, many of whom were close personal friends of the poet Alexander Pushkin, were exiled to Siberia. Many of their wives bravely left St. Petersburg to accompany them into brutal years of depravity and primitive conditions.  “The Decembrist Wives” as they were known, were much admired and set, if you don’t mind me mentioning it, the bar rather high for what is considered acceptable loyalty in a Russian wife.

To get back to Russia’s present-day situation, however, the Constitution is doing very well. It consists of 9 Chapters, a preamble and concluding and transitional documents.  All Russian presidents swear the oath of office by placing on hand on the Constitution and the original copy is kept in the Kremlin Library.

I thought it might be interesting for readers to skim a few highlights of the Russian Constitution.  The good people at kremlin.ru and Bucknell University, who provide English translations of Russia’s Constitution, make this task easier.

For someone like me, Article 44 is the key to the whole document and the one I have memorized by heart in Russian.

1. Everyone shall be guaranteed freedom of literary, artistic, scientific, intellectual and other types of creative activity and tuition. Intellectual property shall be protected by the law.

2. Everyone shall have the right to participation in cultural life, to the use of institutions of culture, and access to cultural values.

3. Everyone shall care for the preservation of the historic and cultural heritage and safeguard landmarks of history and culture.

What this means, Readers is that I can take pictures wherever I like, and so can you.  So the next time some lunatic security guard tries to stop you, just mention Article 44 of the Russian Constitution.  You can also add that the President of Russia, Dmitry Medvedev, a devoted shutterbug has said that people can take pictures wherever they like and, according to Article 80 he is the top dog:

4. The President of the Russian Federation shall be the head of state.

Here is another one, I find interesting:

8. Motherhood and childhood and the family shall be under state protection.

9. Care for children and their upbringing shall be the equal right and duty of the parents.

10. Employable children who have reached 18 years old shall care for their non-employable parents.

According to # 10, all children over the age of 18 are obliged to care for non-employable parents.  I can’t think why this has not taken off in Russia, given its current demographic…I have to hope that, like the majority of Russian citizens, Babushka and Dedushka have not perused the Constitution to this level of detail.  Yikes.

So, in closing, the next time you hear someone faff on about socialism and stuff in Russia, remind them that Russia is a constitutional democracy and has been for seventeen years.