Here is an opportunity to raise a glass

…if you ever stayed up all night to study for a genitive plural or perfective/imperfective test…if you ever had to forgo a frat party to make your plodding way through Lermontov’s Hero Of Our Time, or Pushkin’s Captain’s Daughter, today is your day!  If you can speak Russian beyond  “to the left,” or “to the right,” or “a diet coke with ice please,” then get yourself some flowers and a bottle of wine. You’ve earned it! 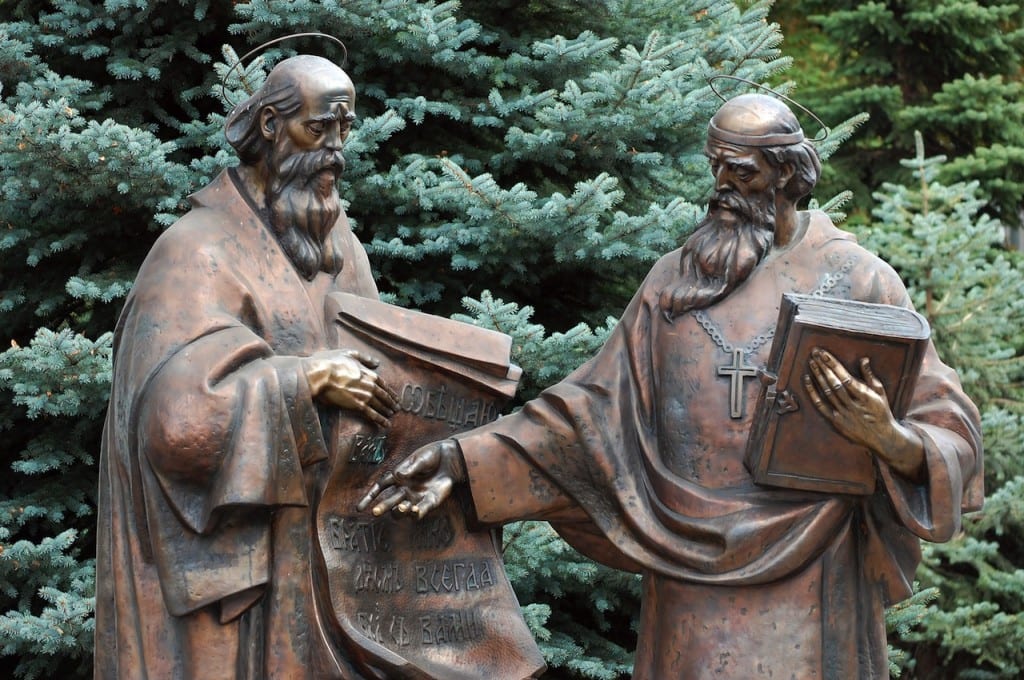 Today is Slavic Writing and Culture Day!  This holiday was established in 1863 as an Orthodox Christian saint’s day, celebrating brothers Cyril and Methodius, 9th Century Christian missionaries from Greece, who were sent to convert the Slavs.  As part of their efforts, they invented first the Glagolitic alphabet and later, the alphabet that bears Cyril’s name:  Cyrillic.

I think the naming thing was politeness on Methodius’s part, as Cyril died much earlier, but they may have flipped a coin.   With these letters, they were able to translate the Greek New Testament into a vernacular the Slavs could understand.  Then presumably, they taught the Slavs to read and write.  And that worked out pretty well. This language can still be heard today by the clergy in the Russian Orthodox Church and is known as Old Church Slavonic.

Learning Russian is not as hard as Mandarin Chinese or ancient Persian, but it has some challenges to it.   The letters brought to you by Cyril and Methodius can be tricky.  English “P” is a Russian “R” and, as fan’s of Murder on the Orient Express know, English “H” is a Russian “N.”  Sometimes reading Russian makes one feel slightly dyslexic and mildly nauseous but you get used to it.

are complicated.  They have two “aspects:” the imperfective, which refers to the action of doing something, such as “I am reading War & Peace,” as opposed to the “perfective,” doing the action with the intention of getting it done.  Very confusing, and something I still haven’t really mastered, although I find the distinction curiously germane to the national character somehow.

“With over 340 different verbs of motion, those three sisters couldn’t get up and go to Moscow!”

Verbs of motion, which take up most of the second year of any course in Russian, have the perfective/imperfective thing going on, as well as the distinct difference between moving on your own steam, or in a vehicle, which does cut down on the drunk driving, like a little bit.

Russian is full of diminutives, both for people and things.  These are achieved in a staggeringly extensive range of endings, but some common ones are “-chick,” or “-sulia” and “-ichka.” My mother-in-law manages to combine all of these when referring to Velvet as her “vnutchichkuliaetchka,” taking the simple word “vnutchka” meaning granddaughter and turning it into “darling little tiny granddaughter.”  In this case, a diminutive conveys affection.    When a Russian is trying to get something out of you, they automatically make what ever they are asking for a diminutive and insert the adjective “nimnogo” or “not much” so you get a request for…”a teeny weeny advancechick on the salariula,” for example, or, “just pour me a miniscule not a lot amount more voditchka.”  This gets old really fast, particularly up in St. Petersburg, where they have turned this into a fine art.

On the more formal end of the spectrum, you have the names.  Names are confusing, and a lot of people just throw up their hands on the first page of War & Peace, since everyone has three names.   Russians have first names and there are only roughly 10 of each sex: Alexander, Dmitry, Mikhail, Nikolai, Andrei, Vladimir, Ivan, Igor, Sergei, and Boris for boys.  Anastasia, Svetlana, Olga, Tatianna, Ekaterina, Valentina, Elena, Irina, Natalia, and Nadezda for girls.  These basic names have endless diminutives.

You can tell this is a society that likes to remain largely anonymous.

Russians also carry an obligatory middle name, called a patronymic, which is the name of their father (of course) and an ending, which is  –evna for a girl and –ich or -evich for a boy.

So, for example, the youngest and most famous daughter of the last Tsar of Russia, Nicholas II was called Anastasia Nikolaevna.

In my cross-culture marriage group, you get a lot of funny combos of names and patronymics, mostly from the well-populated ranks of foreign men who married Russian women.  I know a Cyril Brucevich, a Ashley Christopherevna, and a Tom Eduardovich.

Russians use the patronymic as formal address and very intimate address.  To address a Russian formally, an equivalent to “Mrs. Smith,” you refer to them by their full first name and patronymic together:  Alexander Dmitrievich or Olga Vladimirovna.  For someone with whom you are very intimate, say a child, a spouse, or a childhood friend, you can address him or her with his or her patronymic only.

I don’t have a patronymic, but my father’s name is Peter, and the patronymic for girls is “Petrovna,” which is how HRH addresses me.   It’s important not to confuse these two very different forms of address, as I did, by referring to the 60-something veteran head of the National Tourism Committee’s English section as “Vassilievna,” which was incredibly rude.  Everyone was so embarrassed that no one told me for about six months, at which point, thank goodness, she retired.

Finally, a Russian has a last name, which normally ends in –EV or OV like Medvedev, but sometimes doesn’t, such as Putin.  Mrs. Medvedev is Svetlana Medvedeva and Mrs. Putin is Lydmilla Putina.  This is a problem for us, as a family, since Velvet and I have an “A” on the end of our name, and HRH doesn’t, as we saw earlier this year with the TSA crowd.  He always gets an “A” on his nametag at Velvet’s school, which I have to white out before we can throw ourselves into non-stop fun and games of parents’ weekend.

Learning Russian has gone somewhat out of fashion lately, which may be because we now need more Arabic and Chinese speakers to help run the windowless buildings just over the river from Our Nation’s Capitol, but that seems a shame.  There is nothing like curling up with my favorite book, which is actually not “War & Peace,” but  “500 Russian Verbs” (they are ALL fully conjugated…perfective AND imperfective!!!) and a teeny weeny glassulia of chardonnaychick.

Happy Day of Slavic Writing And Culture to all Russian speakers, those with patronymics, and those who wish they had one!

Cпасибо!   Did you learn something new?  Does this make you want to race out and get a copy of “War & Peace?”  Give it a try…you can skip the battle scenes:  I always do.   Let me know how you are getting on learning your foreign language by clicking the comment button below!