Day of Russian Policemen/День российской милиции: Do They Know Where My Husband Is?

All about Russia’s finest! 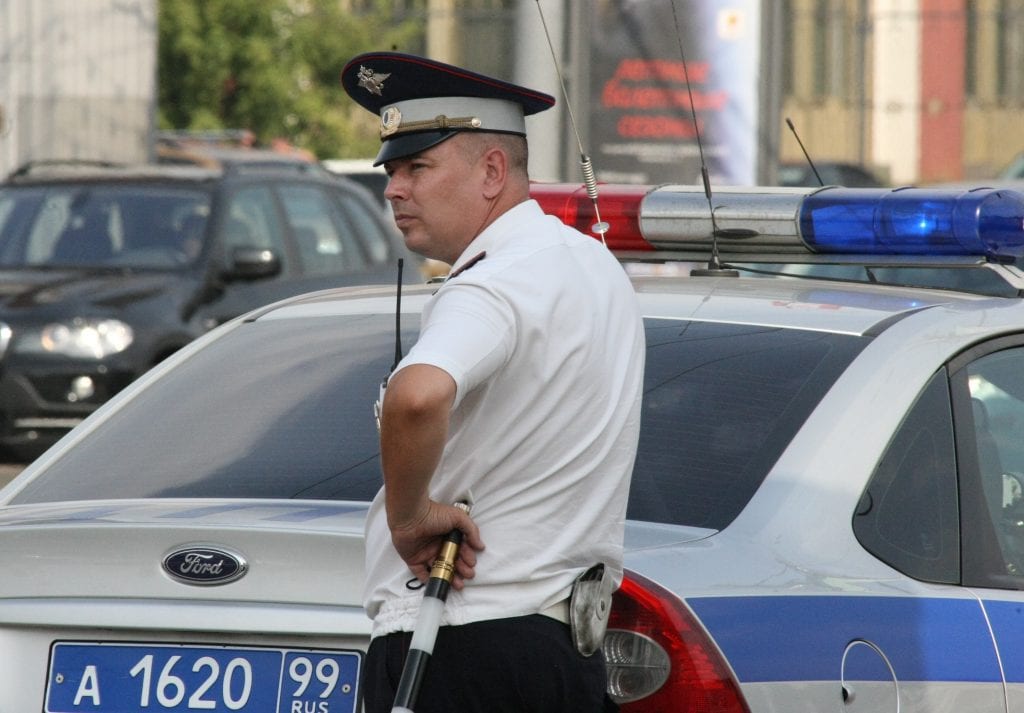 I launched this blog one year ago with an inaugural post about envying all the smooth-haired authors on the book jackets who divided their time.  In their case, of course, it’s like Oxford and London, or New York and Paris, or Cape Cod and something else.  I think I must have the (very dubious) distinction of being the only aspiring writer to divide my time between Northampton and Moscow, but there it is, when life hands you beets, make some borscht.

And what could be a better way to celebrate this milestone than by celebrating it in tandem with Russia’s Policemen!  Today marks the 40th anniversary since the creation of “Day of the Russian Militia” back in 1980, though of course, Russia’s police go back almost 300 years, to their founding by – you guessed it – Peter The Great in 1715.  There have always been policemen in Russia, but, as with so many organizations, they were slightly re-organized in 1917 on November 10th, like three days after the Russian Revolution (which might have been a hint, although perhaps that is unfair: hindsight is of course always 20/20 vision.)

HRH was curiously absent all day yesterday.  No calls, no SKYPE, and a few texts went unanswered.  This always makes me slightly nervous, but when I went into my Top Secret File on Russian Holidays and looked ahead to see what The Stunt had in store for me, I knew immediately where he was, and drew a long and heartfelt breath of relief.  No Oooh-Lah-Lah Strip Club last night for HRH.  Clearly, he was out with his policemen friends, helping them get well fortified and lubricated with 18-year old Scotch in preparation for the rigors of the day ahead.  HRH is a big fan of Policemen’s Day, and they like to start their holiday the night before.  So, it is just as well I am in Northampton at the moment, where I recently had my own little encounter with the local constabulary.

A policeman’s lot is not a happy one

I was on my way to my Writing Group, and, as usual, I had left early to get the plum parking spot at the top of the road, which runs perpendicular to our host’s road.  I like to have the top spot since I’m still enough of an urban beast to feel slightly terrified walking down a dark street on my own, but truthfully, I can’t parallel park for love or money, so getting there early means I have time to wiggle the Subaru around before the other Subarus get there.  I don’t like to be observed when trying to park, which is a phobia I developed when I lived on Leningradsky Pr-t and shared a courtyard parking space with the Metro Police.   They used to love watching me try to back out of my woefully too small parking space in my very large Land Rover.  They would stand around, spit, scratch their crotches and laugh at me.  Sometimes,  I would just put my head down on the steering wheel and howl until they went away, or HRH or Tolya-The-Driver came to rescue me.

So there I was, in Northampton, all snug up against the curb, rooting around in my bottomless tote bag for my flash drive on which I keep all my writing work when a bright light flooded the window.   I looked up into a 4-gazillion watt searchlight, aimed right at me from a Northampton Police cruiser.

The officer got out of the car and crossed the street.

“Calm down,” I said to myself, “I’m probably just blocking a fire hydrant or something.”

“Yes,” said my Slavic alter-ego, “but you still don’t have any cash on you…you’re gonna be in troooooooooble.”

I rolled down the window.

“Ma’am, are you okay?” asked the dead good-looking police officer in a concerned manner.

I was blind-sided.   Policemen aren’t supposed to be concerned, not in a sincere sort of way.

“I am…I’m fine,” I said, wondering if I should make a full disclosure about not really being able to parallel park.  I wondered if he might share my concern about the social faux pas inherent in arriving too early for Writing Group.  Russian police, I knew, didn’t give a damn about that kind of thing, but Officer McDreamy looked like he might just be in a writing group of his own.

“Don’t be ludicrous,” said my alter ego, “like he cares.”

“Just wanted to be sure, you have a good evening now,” he said and got back into his cruiser.

I wanted to give him a bottle of like 80-year old scotch right there and then but, of course, they frown on that kind of thing in Northampton.   So, I went home and wrote a check to the Policemen’s Fund.  A large one.

Happy Policemen’s Day to any of you still standing today! And to all of Noho’s Finest for that matter!

First of all, heartfelt thanks for your loyal support which has got me through one year of blogging!  As a readership, you number more than 35,000, which means a lot of you are keeping very quiet!  I’d love to hear from you going into year 2, so take this opportunity to weigh in with a comment!  If you were an early commenter on this blog and stopped, I wish you’d weigh in again!

I’ll bet you have a good policeman story – Russian or Northamptonite or wherever you do hail from!  My good friend Mouse told me a funny one about Stockbridge, MA’s legendary Officer Oppenheimer, better known to his fans as “Officer Opie.” Opie, as the cognoscenti refer to him, is the anti-hero of Arlo Guthrie’s ballad “Alice’s Restaurant,” he who has “the twenty-seven 8” by 10” colored glossy photos with the circles and arrows and a paragraph on the back of each one.”  After the film of  “Alice’s Restaurant” came out with Opie in a cameo role as himself, he stopped calling Mouse’s mother, “Mrs. Miles” and would say, “Hey Flo!”

Got a story like that one?  Let us know by hitting the comment button below and weighing in.