Day of Remembrance and Mourning /День памяти и скорби: What on Earth Was Hitler Thinking Of?

Today is the Day of Remembrance and Mourning, which marks the day in 1941 when Hitler launched his fatal “Operation Barbarossa” and opened up his war onto a second front by invading the Soviet Union. 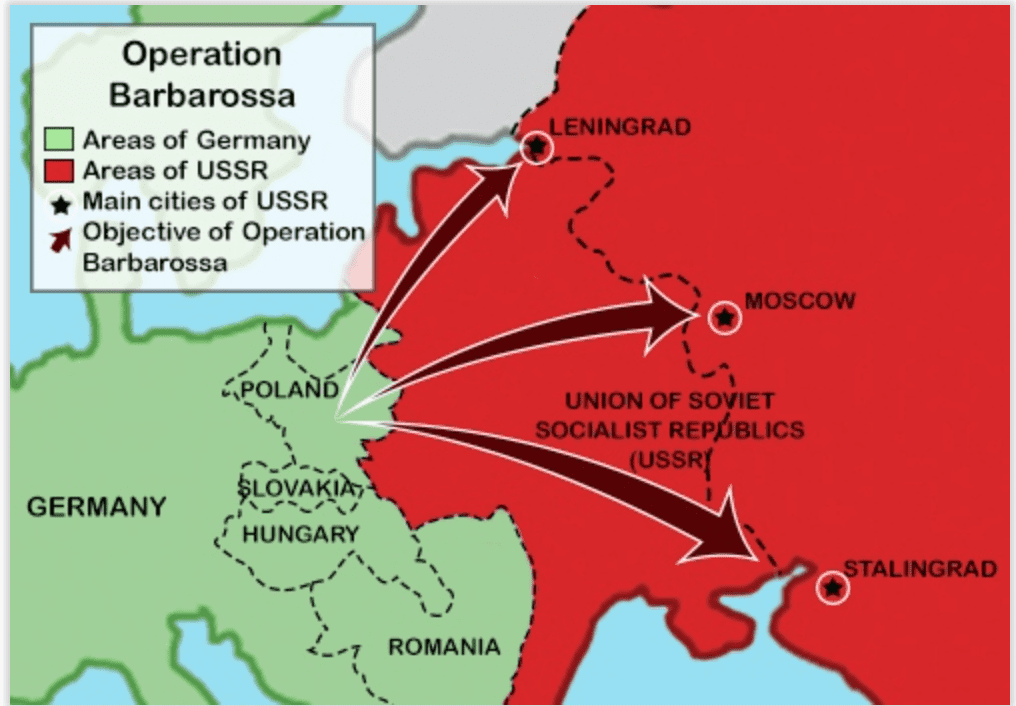 So for the Americans out there, you will readily understand when I tell you that this day is Russia’s Pearl Harbor Day.

When I first worked as a tour guide in the USSR and later Russia, I spent a lot of time collecting really badly written guidebooks from various places in an effort to beef up what in the tourism biz is called “the commentary.” This was pre-Internet, so I painstakingly copied all kinds of information into an exercise book and eventually developed a very rich repertoire of historical facts, figures, anecdotes and other things with which to entertain busloads during long haul trips to Sergeiv Posad’ or Tsarskoye Selo, or if I got stuck in a traffic jam.  I could never bring myself, however, to work in the pat phrase which appeared in every single overview of USSR history published between 1945 and 1989: after a bulky and distinctively hyperbolic section on the Victorious October Socialist Revolution, way too much information on V.I. Lenin and his mates, and those brave sailors from the Battle Cruiser Avrora firing the first shot etc. things would come to an abrupt close.   It would then Fast Forward right to June 22, 1941 (adroitly by-passing the murky 1920s Famine/NEP period and the somewhat depressing 1930s), when all of the sudden, as the guidebooks explained, “The peaceful life of the industrious Soviet people was brutally interrupted by a sudden and unexpected invasion of the Nazi armies.”

Amongst modern historians, there are two schools of thought on this “it was a complete surprise, we had absolutely no idea they were coming” theory.

1.    Theory 1:  It was a complete surprise, they had absolutely no idea they were coming.

This is supported by the Nazi-Soviet Nonaggression Pact of 1939, in which the USSR shut its eyes to the Nazi invasion of Poland, while it grabbed the Baltics, and parts of Finland and Romania.  Stalin, who seems to have been paralyzed by fear, cowered in his bunker for more than a week, only making a public address on July 3rd.  The brain drain of the 1930s had left the Red Army without an officer corps, and the troops were slow to react to the surprise attack.   This school of thought makes the eventual sacrifice of more than 20 million people and the key role the USSR made in ending the war even more impressive.

2.    Theory 2:  While it was a surprise for the people of the USSR and the ordinary soldiers of the Red Army, it was no surprise to Stalin and his inner circle, or the Military High Command.

The 1930s was all about getting ready to fight a large-scale global war with A-Listers over ideology, and the 1939 Pact was a strategic move to buy more time and continue the military-industrial build up.

In any case, Hitler was nuts, on that, we can all agree.  What on earth was he thinking?  (Some historians have suggested that he expected the 12th Century Prussian King Frederick I  known as “Barbarossa” to rise up from the dead like those guys Aragorn goes and gets in The Two Towers, and help Hitler put the cap on Total World Domination).  This seems to have not worked out, and therein lies a lesson for us all:  never count on slightly fictional/definitely dead heroes to show up to help out.

“This war is not an ordinary war. It is the war of the entire Russian people. Not only to eliminate the danger hanging over our heads, but to aid all people groaning under the yoke of Fascism”

And, readers, I’ll leave you with this last thought:  is this all a little too much?  Do we need to celebrate the beginning, as well as the end of wars? I don’t think the British do:  I’ve never seen a “Beginning of World War I Day” flower campaign, have you?   The French (obviously) don’t, nor do the Italians…you don’t see them saying, “Happy Beginning of the Third Punic War Day,” do you?   The Spanish don’t and, God knows, the Germans don’t.   Only the USA and Russia.

Do you think we should celebrate the beginning of wars?  Do you, perhaps, know of some other nations that do?  If so, leave me a comment and let me know.

I cover more Russian History in my free Russian history primer: Have Personality Disorder, Will Rule Russia, available wherever great digital books are sold.  But this one is free…so download it today!