Cool Cucumbers in a Pretty Pickle

A cautionary tale of cool cucumbers caught in a hot spy ring sends me into the kitchen to make pickles. 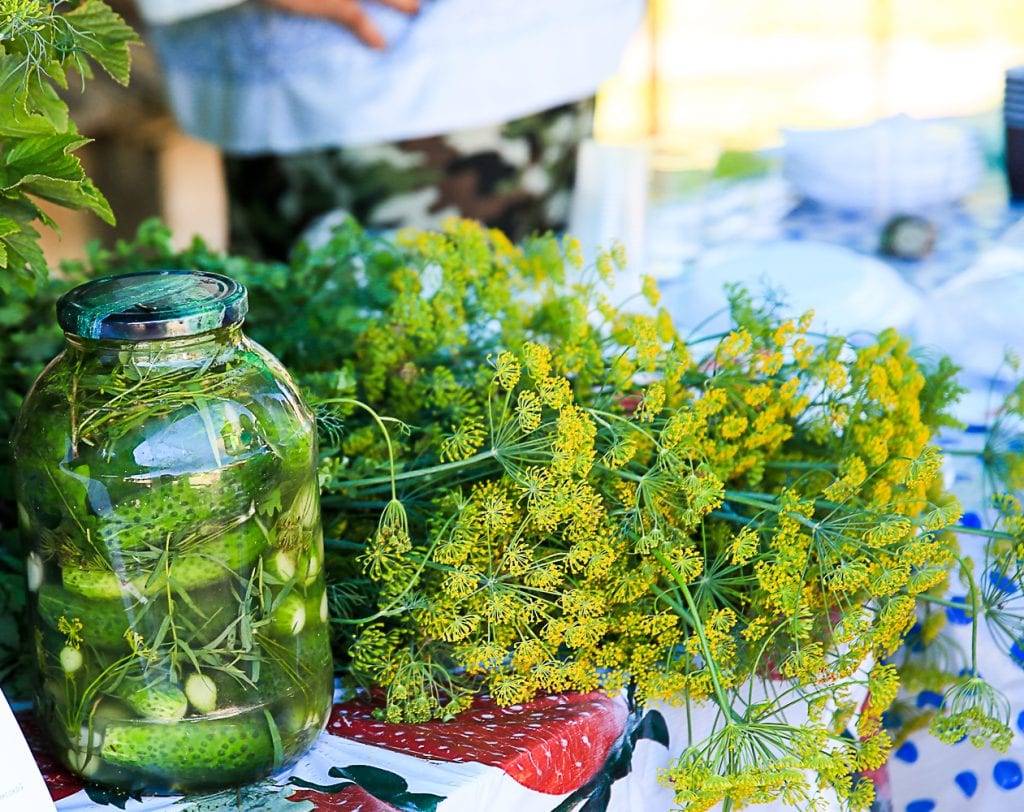 I am riveted by the sizzling hot scandal of this scorching Moscow summer: the ring of Russian sleeper spies nabbed in the USA.   While they are up to their necks in trouble at the moment, some of these men and women were able to pull off the difficult task of pretending to be ordinary American suburbanites for more than a decade, and I find that very impressive.  I could never pull it off: despite two decades as an American in Russia, I could never pass for a Russian, except possibly in the kitchen, where I can do a somewhat credible imitation.

Like most women in Russia (and all over the world) I have some free time on my hands at the moment thanks to the World Cup, so this is an ideal time to attempt an ambitious culinary project, and I don’t have to look far for inspiration. Large 5-liter jars, huge bunches of dill, oak and blackberry leaves, and mountains of cucumbers are front and center at the market: it’s pickle season!

The art of pickling came from China to Russia, via the Tartar Mongols in the 13th Century.  Today, pickled cucumbers are as much a part of Russia’s culinary culture as vodka.  These two staples are often teamed up as the ideal appetite-whetting device during the lengthy hors d’ouvre or zakuska stage of a Russian dinner.  Pickles are also the classic accompaniment to many traditional Russian dishes such as Beef Stroganoff.  And, what pickles are to the beginning of a Russian dinner, pickle juice or “rasol” is to most  Russian root vegetable soups as well as the “morning after,” considered by many Russians to be an effective hangover cure.   Pickles juice, until comparatively recently, was also used as an effective skin tonic.

What to do with a glut of cucumbers?

The growing season in Russia is short, but intense, especially during the “White Nights” when the sun is in the sky for twenty hours. These are ideal growing conditions for cucumbers.  This time of the year, they are cheap, plentiful and available on every street corner, but the danger is that once harvested, cucumbers have a very short shelf life, which is why many people leave them on the vine too long, or end up with too many to enjoy raw.  Pickling is the obvious solution for both problems.

My good friend, and pickle connoisseur, Zachary (aged 8) feels that pickles can be too sour, so, for him and for all the over-zealous gardeners out there with a produce glut, I present Russia’s answer to both problems:  Semi-salted cucumbers (Malaya Salonayie Ogurtsi) — by far the easiest pickles to prepare, they preserve the crunch and freshness of a cucumber just off the vine, but add the piquancy of dill, salt and garlic, as well as a new lease on life.

Pickling is easier than you might think, but you must be sure that all of your implements are sterile, including your tools, and most importantly, the container for your pickles.  Immerse these in boiling water, or run them through a sanitary cycle of a dishwasher and then use immediately.  Use a mild vinegar and water solution to prepare the surface(s) you will work on, and then put that vinegar away, because it has no place in this recipe!  Vinegar and a longer pickling time are what make heavily salted or sour dill pickles (Saloniey Ogurtsiy).

I use a very picturesque antique stone pickle jar I bought in New England, but an ordinary wide-mouthed jar works equally well, as well as offering a marvelous and very satisfactory visual effect for the hard-working pickler. Elena Molokhovets, Russia’s 19th Century authority on Russian cuisine suggests that, if possible, cucumbers be picked the day you plan to pickle them, and that they be plunged into ice water just prior to the pickling process for maximum crunch.

I’m indebted, as always to Darra Goldstein’s A La Russe for inspiration, direction, and the sheer courage to attempt this kind of thing!