What is it about the mouth-watering food of Bologna that makes foreigners want to massacre it? 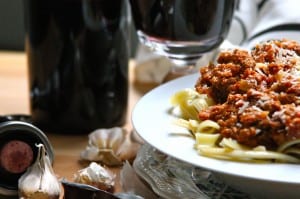 I adore Mortadella – who doesn’t?  But I wouldn’t eat Doktorskaya Kolbasa or Oscar Myer boloney – those Russian and American perverted version of the delicacy — for love or money.  Why does “baloney” in America, said sarcastically mean “nonsense”?

Spag bol has had a very bum rap.  It appears on the tables of students or the newly graduated as hamburger fried up with very inferior bottled tomato sauce.  It’s the staple of bad Italian restaurants the world over.  We associate it with “fast” “easy” and “cheap.”  Real Spaghetti Bolognese is anything but.  It’s a complex blend of aromatics, vegetables, and meat, melded together with tomatoes and milk for a lengthy “low and slow” cooking that produces a velvety “melt-in-your mouth” texture and flavor.

The Moscovore family likes spag bol, so when I make it, I make a lot of it, and I freeze a whole bunch. I’ve developed this recipe over a number of years from various sources.  Marcella Hazan, of course, is the Italian food guru, and I began my exploration with her recipe in “The Essentials of Classic Italian Cooking” but I was intrigued by a recent article in Cook’s Illustrated that told us to lose the dairy (I’m skeptical) but to add a lot of sage, which turned out to be a wonderful flavor to introduce to this delightful sauce.

As the Moms out there scan the list of ingredients, they’ll be dancing the fandango:  Spaghetti Bolognese sauce is a superb place to hide carrots.  Lots and lots of carrots.  By the time the sauce is done, they’ve cooked down to a sweet and delectably soft state where they are hard to detect and hard to resist.

Some of the original ingredients of Spaghetti Bolognese are a little hard to find in Moscow, such as pancetta.  I’ve substituted Warren’s English Bacon, which seems to do a great job.  Veal is not always easy to find, so Mr. Warren to the rescue again – his pork and sage sausages, released from their casings and fried up do a yeoman service.

A final note:  “Spag Bol” is actually “Tag Bol” as a recent article I read pointed out.  The Bolognese never serve it with long, thin noodles, but rather the thicker, flat ones. I’ve also seen recipes, which encourage chefs to try the shorter, tubular pastas such as penne or rotini.  They seem to work very well, offering convenient nooks and crannies for the delectable sauce to linger in.  Lovely!