Chicken Soup for the Humor Columnist

Tancy O’Reilly lives alone, and was felled by a bad cold over the November holidays.   I packed up some chicken soup, garlic, and oranges and went over to her apartment. 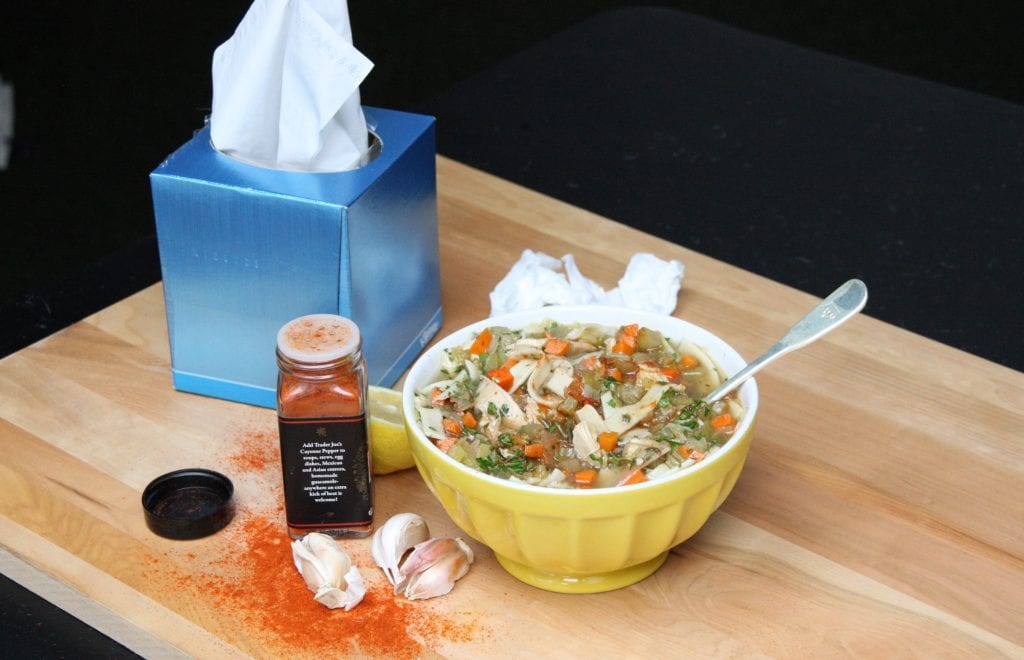 She was in bad shape: huddled in bed, surrounded by balls of soggy used Kleenex, a sticky laptop, and an incongruous teddy bear.   I took one look, banished her to the bathroom for a long hot shower, opened the windows to freshen up the air, then changed the sheets.  I heated up the chicken soup, dropping peeled and sliced slivers of fresh garlic into it and let it simmer.  I squeezed the oranges, fixed a tray and returned to the bedroom.

Propped up against fresh pillows, in a clean nightgown, Tancy slowly spooned the garlic soup into her mouth, and sipped the fresh orange juice, “This is great,” she croaked, “but I hate to take you away from your work.”

“Well, I needed a break,” I responded, scooping up dirty T-shirts from around the room into a laundry basket.  “I’m a little frustrated.  I wanted to use this week to really get stuff done with my book, but I keep having to re-write my humor piece for this month.”

“My editor, whom I adore, keeps rejecting everything I write.   I wrote about Dr. X –“

“They have to be careful about legal issues,” I said shrugging,

“Why don’t you write about these crazy holidays?” asked Tancy, “how the calendar gets all screwed up?”

“I did that already,” I said, “and got into trouble for it.”

“Some of the other editors objected to the phrase ‘warped individual sitting in a windowless room in the Kremlin’” I said, shaking my head, as I ran a duster over Tancy’s deep window ledge,  “So, then I put in another piece on how Russians never write thank you notes –“

“—Now that is absolutely true,” said Tancy, stuffing another pillow behind her back and wriggling up to a better position,  “—or you get one of these really silly formal ones.  What was wrong with that?”

“Perceived as angry – not funny,” I said shortly.  My mobile rang; it was Velvet from home with a question about her homework.

“Mommy, can I write about the Russian guy with the big cross at the Baptism of Christ site in Jordan who went in the river?”  Velvet’s class was studying the Middle East, and each child was doing a country, she was doing Jordan.

“You mean the guy with the wife who had blue fingernails that matched her bikini and put Canadian club in her Diet Coke at 10 am?” I asked, catching my breath.  Now, they really were funny.

“They sound perfect!” wheezed Tancy reaching for the Kleenex, “what happened to them?”   I put Velvet on speaker so she could help tell the story.

“He wore this teeny tiny Speedo and a huge pectoral cross” I began.

“And he jumped into the Jordan River –“ said Velvet, “which was really gross.”

“It looked like dishwater” I qualified, “and like only a tiny strip of dishwater, but he was submerging himself under it over and over again, while his wife – blue fingernails – filled up the empty Canadian club bottles with the water…and they were totally oblivious that on the other side of the bank were about four hundred Israeli soldiers with their weapons trained on him.   The Jordanian guide was tearing out his hair.”

“And there was this man from America next to us, — what did he say?” said Velvet giggling.

“No, that story needs more than 3000 characters without spaces – and I want it for the book,”

“You could always publish the recipe for this chicken soup,” said Tancy “I feel better already.”

“That’s my cooking column,” I sighed.

This piece first appeared in Russia Beyond The Headlines and The Washington Post on November 18, 2010.  A link to the online original version can be found here.