By Jennifer EremeevaJanuary 31, 2011May 22nd, 2017Uncategorized
12 Comments
Happy Birthday Russian vodka!  Finally —  holiday we can all get behind! 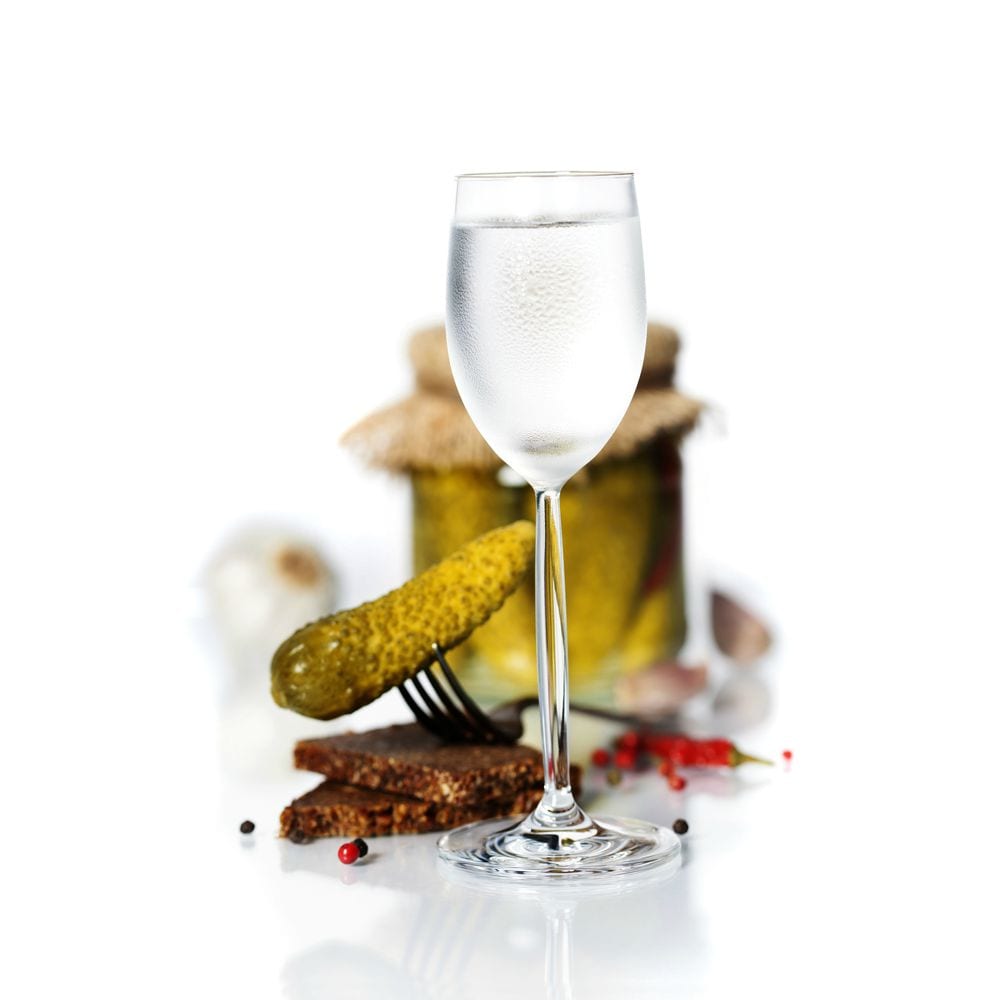 On this day, in 1865, renowned chemist Dmitry Mendeleev (last seen writing the lyrics to a Tom Leher ditty), defended his doctoral dissertation, “On Combining Water and Alcohol,” in which he began the exploration of the ratios, concentration and weights of various concentrations, which would lead to the publication, in 1894, of Mendeleev’s state standards for vodka production.   Mendeleev’s 40% has remained the standard by which Russian vodka is produced to this day.

Vodka is tasteless going down, but it is memorable coming up. -Garrison Keillor

It may come as a surprise to readers to learn that vodka is not Russian at all, (said she diving under the table for cover.) Unless those readers are Polish or Lithuanian (and in the era we are looking at this was more or less the same thing) in which case they will nod their heads vigorously and agree that, indeed, vodka is just another one of those things, like onion domes, snow, oil, and fur that the copy cat nation has stolen from other cultures and made their own.

Vodka can be traced as far back as 8th Century Poland, where it was more commonly used as medicine.  Multiple sources credit ambassadors from Genoa for bringing the first hard spirits to Russia the 14th Century to the court of Prince Dmitry Donskoi. They called it aquae vitae, or “water of life” and although it was considerably lower in alcholic content than 40%, it was much stronger than mead or beer, which made up the liquor cabinets of the 14th Century boyars.  Having just seen off the Tartar Mongols, the Russians were ready for a stiff drink, and took to aquae vitae like ducks to water.

Russia’s rulers kept close control over the distillation and distribution of vodka, which remained a state monopoly until the 18th Century, when Catherine The Great granted distillery rights to select members of the aristocracy, who vied with one another to produce the purest and most sophisticated brands of vodka, producing flavored versions which, as Moscow’s Vodka Museum points out used, “all the letters of the alphabet…cherry and pear, blackberry and acorn, caraway seed and dill, bird cherry and sage!”

Prohibition has reared its ugly head more than once in Russia, though in each case, legislation designed to curb alcoholism only fanned the flames, since addicts turned to illegal hooch to satisfy their cravings.  Prohibition issued as a patriotic measure in 1914 by the Imperial Duma was only repealed in 1925 by the Soviet Government; and the roller coaster years of perestroika and the Wild 90s were made even more miserable by Gorbachev’s unpopular move to limit the production of liquor.

I am not, myself, a big vodka fan, and this is probably the reason I am still alive and well on this earth since it costs less than Windex here in Russia and is often used for much the same purpose.   In fact, vodka is used in all kinds of original ways in Russia, and here are just a few:

Medicinal: Vodka has always been considered a cure-all for anything that might be wrong with you. When vodka was first introduced to Russia, it was largely used for this purpose, which may be why Russians all drink “To your health!” when they start to knock it back. Got the runs?  Or the opposite?  The cure is the same: Take a shot of vodka with a heaping teaspoon of salt and, strange as this may seem, it acts like a kind of intestinal cement.  I was forced to try it on (I kid you not) The Road To Samarkand and it gets the plumbing sorted out in record time.  Throw away your Imodium. Vodka, rubbed on the chest and back of an infant is the quickest way to bring down a fever, if you don’t mind your two year old smelling like the inside of Kazan railway station, that is.

Vodka, mixed with pickle juice or a delicate mixture of tomato juice, horseradish, Tabasco, celery salt, and Worcestershire sauce (depending on your ethnic origin) is a good way to vanquish the excesses of the previous evening!A Moscovore Bloody Mary:Ingredients: 3 Tbl of tomato ketchup 1 liter of tomato juice juice of one orange 1 tsp of coriander seeds 2 celery stalks 1 dash of Tabsco Several Dashes of Worcester Sauce sliced lime best quality sea salt fresh cracked pepper 3-6 oz of vodka (although, really?  I use AquaVit from Denmark.  So much better!) Combine the vodka and ketchup in a small bowl and set aside for 5 minutes. Combine the vodka/ketchup mixture with  tomato juice, orange juice, Worcester Sauce, Tabsco, salt, pepper and coriander seeds in a jug and mix thoroughly, or, better still, in a blender or cocktail shaker with several cubes of ice.  Garnish with celery stalks and lime.  Enjoy! [/box]

Housekeeping: My cleaning lady looks askance every time I wave the vinegar bottle at her as my go-to, eco-friendly, and cost effective cleaning agent.  She prefers Mr. Proper (a Slavic cousin of Mr. Clean) but if that’s not available, she’s got the vodka bottle out quicker than you can say “Stolichnaya” to get rid of mold on chrome, smears on glass, or any stubborn residue or stickiness.   It’s cheaper than Mr. Proper and smells much much much better.

In another post, I advocated taking all the dubious cheesily branded vodka bottles you received for New Year’s, and pouring them into the hole where the windshield wiper goes: lots more effective on these insane -30 degree mornings (the kind where your contact lenses begin to stiffen) and, as any Russian will tell you, it’s a lot more “ekologitcheskiy chisto,” (ecologically clean).  Like that’s ever bothered them. Finally, I have seen with my own eyes just how effective Russian vodka can be as a de-icing agent. If, however, you are not that creative, then you can always fall back on vodka’s culinary charms.  If you are a man, that is.  Vodka is not really a tipple for girls in Russia since it is taken straight, no chaser, out of a shot glass.  You order vodka by the grams here:  50 grams is a small shot, 100 is a double, and the barman measures it out from the bottle into your shot glass.  Ideally vodka is somewhat chilled, but that’s by no means a deal breaker.   Like tequila, there is a ritual to taking a vodka shot:  get your vodka poured and hoisted, take a massive sniff of some black bread, exhale vigorously, knock back the vodka, then grab a pickle, a piece of dried fish, or, if there is nothing salty to hand, the bread you just stuck up your left nostril and bite into it. Lather, rinse, and repeat. 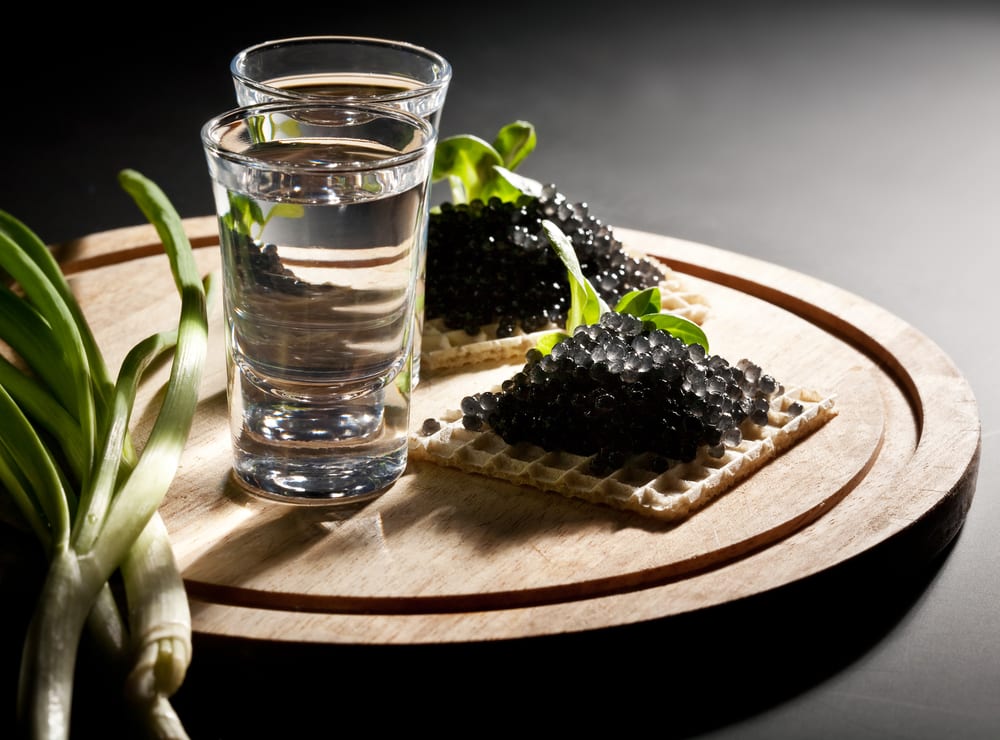 Vodka today is still a thriving business in Russia and a favorite take-home souvenir of foreign tourists, many of whom seem baffled that, once opened, the half-liter bottles cannot then be re-capped.  If asked, a Russian looks bemused and wonders why on earth you would need to re-cap a bottle of vodka?

Happy Birthday Vodka! [hr] This post is part of The Stunt: an exhaustive celebration of Russia’s almost three hundred public and professional holidays. [hr] Readers! Do you have a favorite vodka story?   How do you take your vodka?  With tonic and a twist, or a black bread chaser?  Ever try the dried fish?   Let us know by uncapping your bottle and clicking the comment button below! [contact-form-7 404 "Not Found"] Enjoy more posts like this one! [related_posts limit=”5″ image=”3″] [hr] Photo credit:  Shutterstock

Excitement is mounting as the publication of Lenin Lives Next Door:  Marriage, Martinis, and Mayhem in Moscow looms!   Enjoy an excerpt here!