It’s not every day I get to recipe develop for the Hunt. And it’s a pleasure to unveil this amazing Black Bean Soup, located on that tricky intersection of “healthy” and “delicious.” 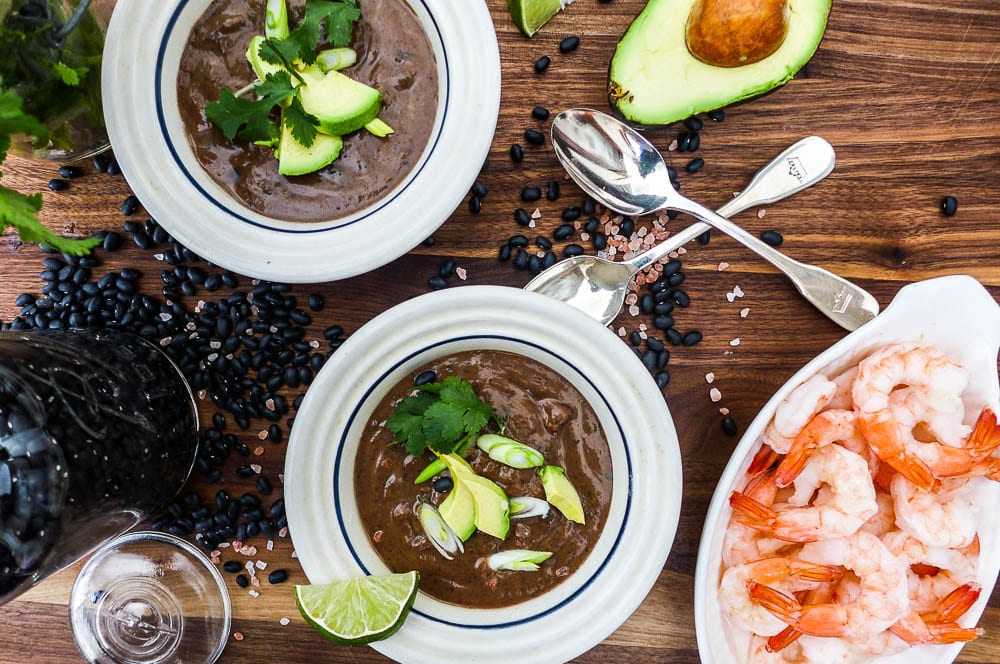 Joe Kelly and I have taken to meeting up at FRESH a couple of times a week for breakfast or lunch. FRESH is a Moscow chain of vegan juice bars, very popular with the dwindling hipster (pronounced “gipster”) element and the Yumm-ski Mumm-skis of Patriarch Ponds who sashay in after Pilates with their Birkin Bags to grab a liter of “All Green Juice,” hop back in their white Range Rovers and off to the next thing.

Joe and I stand out a bit.

For one thing, we are speaking English, which increasingly in this town gets you some funny looks.   “Yes!” You want to say to the funny lookers, “That’s right! I’m plotting de-stabilize your economy, and as soon as I get some decent paint chips and choose a color, I’ll be fomenting a color revolution, designed to overthrow your government and catapult you back to the chaos of the 1990s!”

The other thing is that we are usually in stitches about something, which is also kind of a rarity these days. Usually it starts out with Joe getting a big kick out of watching me try to down a double wheatgrass shot. Apparently, I look hilarious. And it’s a change, really, for Joe and me to be on a health kick, because not so long ago, we both thought a Double Shake Shack burger, fries, and a custard shake represented a balanced meal with all the food groups. But we are both trying to watch what we eat and when the most indulgent thing on the menu is a vegan burrito, there is less temptation.

“Yes!” You want to say to the funny lookers, “That’s right! I’m plotting de-stabilize your economy, and as soon as I get some decent paint chips and choose a color, I’ll be fomenting a color revolution, designed to overthrow your government and catapult you back to the chaos of the 1990s!”

I’m trying to implement this clean(er) eating at home, albeit with less support. I’ve come to the reluctant conclusion that HRH (my “Handsome Russian Husband”) is just not one of nature’s foodies. He’s not a picky eater, and he is a willing participant in the on-going quest to achieve perfection in a number of culinary tricks, but he doesn’t get excited about a new recipe the way I do. He doesn’t think the calves brains at Delicatessen make the universe tilt (he’s wrong). He doesn’t thrill to the thing one new ingredient can do to a previously dull dish.   And he doesn’t like beans or pulses, which makes it hard to swap out the potatoes and pasta for these healthy alternatives. I surprised him, however, with a new recipe for Black Bean Soup.

Okay, there was a fair amount of bacon in it, but that wasn’t the secret ingredient. The secret ingredient was a sweet potato I found lurking, almost apologetically on the produce shelf at Azbukha Vkusa. I don’t know if you have this kind of experience in Russia, but I find that when I come across something rare like a lone sweet potato, swathed in plastic wrap, I feel a visceral need to adopt it and give it a good home. I swear, I can go a calendar year or six in the US without giving sweet potatoes a second thought. See one in Russia, though, and I’m on a mission!

Coming across the sweet potato was fortuitous because I was in the middle of trying to perfect a Black Bean Soup recipe for my friend Rebecca. Like so many of my friends, she used to live in Russia and now lives somewhere else. Rebecca is a hoot and a half — she is very horsey and I think she thinks I am too (she’s wrong), because my daughter Velvet is. I play along, because Rebecca is funny and well-read in a way that I appreciate (her cat is called Bertie Wooster for heaven sake). She hunts, which is impressive, and used to play polo with those lunatics here in Moscow who seemingly have nothing better to do. Now she lives in New York City, where one doesn’t need to cook if one doesn’t want to. Rebecca, however, seemed to want to, and she wanted a good Black Bean Soup she could make in her slow cooker.   So did I. There is something about late winter/early spring that has me craving simple but wholesome food, located on that elusive intersection of healthy and delicious.

I like cooking with dry beans, which is a good thing since tinned beans are hard to find in Moscow. They are more work, but they yield more flavor. It takes a bit of forward planning to soak them a day before, then simmer them, but once you have some cooked beans on hand, the horizon widens considerably. I keep a container in the fridge and here are a few of the things I’ve been doing with them:

But back to perfecting the perfect Black Bean Soup for Rebecca, who charmingly refers to her more self-indulgent self as “Becky.”   She wanted a recipe that was tasty but fuss free.

And, of course, she came to the wrong blogger.

But this one is ALMOST fuss free. You don’t HAVE to roast the sweet potatoes, carrots, and tomatoes, but this is a step I’ve started to include in all of my winter/root vegetable soups and it makes a big, big difference. So, I recommend it.

For Moscow peeps, these ingredients are very easy to source except for possibly the sweet potato. Feel free to substitute butternut squash or pumpkin. It adds an underlying sweetness to the soup and a nice smooth and silky texture. This is a good thing, I think, with bean soups, which can often seem like the flavors haven’t fused properly. Not having a slow cooker is not a problem — I’ve included notes on how to simulate the “low and slow” function of a slow cooker in your oven. Finally, the extra step of blending the liquid with some of the solids gives this soup satisfyingly rich, thick texture that deals with the tendency for bean soups to be watery.

I had some guests staying recently and we had this soup for a late luncheon on a cold, snowy day. I laid out all the garnishes I suggested with a crusty loaf of bread and it made for a very satisfying and filling meal. This is a super option if, like Rebecca, you don’t have a lot of time, or indeed inclination to cook, or if you spend much of your leisure time astride a horse for hours on end. It’s a great staple for weekday nights, after sports on Saturday with the kids, or frozen in individual containers to whip out when you need a quick and nutritious fix.

And, for Joe, if he’s reading: it goes down a lot easier than wheatgrass shots!

If you like the idea of healthy Black Bean Soup, here are a few more recipes using beans, pulses, and whole grains:

Pesto to the Rescue: Hearty Minestrone