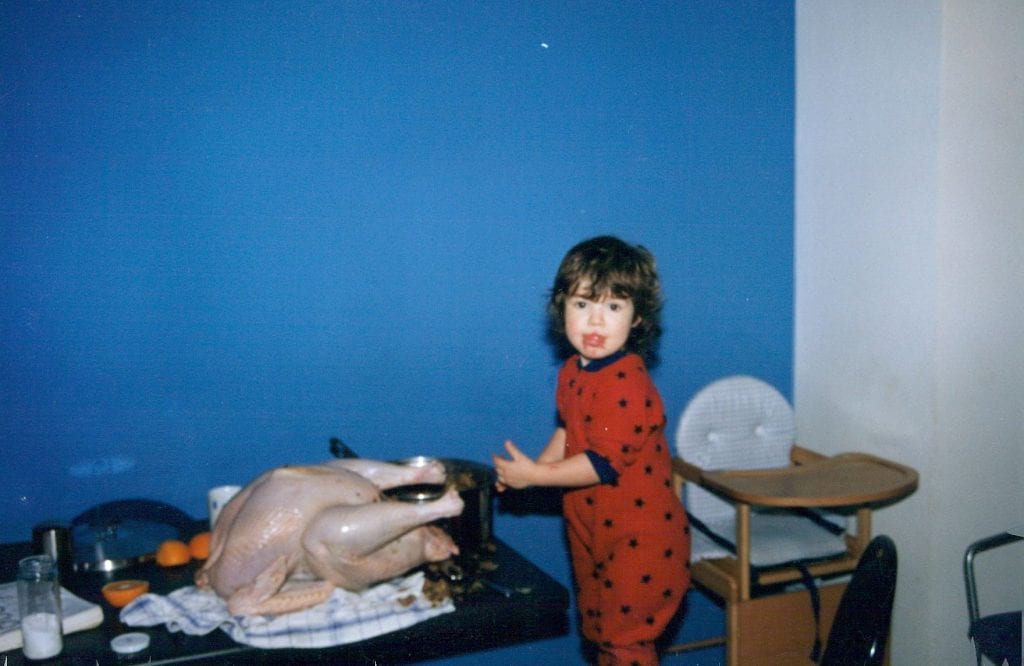 I keep a binder in my kitchen in Moscow, full of recipes I’ve culled from all kinds of sources.  The thickest section is “T’DAY:” a comprehensive survival kit for executing Thanksgiving when one is, as President Lincoln declared in his 1863 Proclamation of Thanksgiving, “sojourning in foreign lands,” where one lacks access to the stuffing aisle, to the no-brainer Butterball pop-up plastic thing, or even to a soothing chat with that inestimable company’s 24 hours hotline.   My binder features recipes and Post-Its, designed to remind me that  “375°F = 190.5°C,” or “Julia says 3 hours,” (the infallible Mrs. Paul Child); and a stern command: “VINEGAR ON APPLES BEFORE CRUST.”  I keep the New York Times step-by-step guide to carving in the binder, encased in a plastic sleeve to protect it from flying grease.

Hunting and Gathering for Thanksgiving

Sojourning as we do in Russia, the hunting and gathering stage is a stark reminder of the trials and tribulations of the early Pilgrim Fathers. It takes about a week to assemble our ingredients: trekking out to the Cash & Carry for stale bread to turn into stuffing, stalking farmers’ markets for fresh thyme and essential sage, and manning up to spend 24 USD for one small jar of pumpkin pie mix.   You try to cultivate anyone with an in at the US Embassy commissary so you can snag that all-important can of Ocean Spray cranberry sauce, lest you be left with Russian gooseberries, which will make your cranberry sauce taste like Robitussin.

Riffing on the Classic Thanksgiving

The actual day in expatriate circles differs only slightly from that in America: we do it on Saturday and/or Sunday, not Thursday;  we do not have the whole football thing going on in the background or the foreground, and it is our urban family we welcome, not our family of origin.   This renders the meal eclectic – my ancestral oyster stuffing mingles with Dee Dee’s string bean, marshmallow, and Rice Crispies casserole.  Joe, much to the horror of his 98 lb girlfriend Tanya, makes classic mashed potatoes for 40, using 2 pounds of butter and God knows how much heavy cream – a hit with Tancy’s Aunt Myrna’s gravy recipe – the active ingredient of which is Pepsi.

Sojourning as we do in Russia, the hunting and gathering stage is a stark reminder of the trials and tribulations of the early Pilgrim Fathers.

I have gradually inherited the responsibility for the bird, or in our case, birds.  Russians don’t get much call for oversized turkeys, so we get three smaller ones at the farmer’s market after a two-week negotiation with poultry team Svetlana, and her slightly sinister husband Igor, who clearly wields the ax a few hours before I collect them.   Svetlana has learned over the years that we do need the giblets, but not the feet nor the feathers.  That is perhaps a lot of detail for the squeamish, but I find getting my turkeys fresh from Svetlana much less hassle than a legendary two-day defrost vigil: a young American airline executive arranged for a number of frozen Butterballs to be flown in for the traditional Thanksgiving Thursday.  On Wednesday, he casually mentioned to a veteran expat wife as they took their seats for Act II of “The Queen of Spades,” that he had been able to keep the turkeys in the dry ice container out on his balcony and they were still frozen solid.  As the houselights dimmed, the expat wife poked the young airline executive and hissed, “Listen, you have to go home RIGHT NOW, put them in the bathtub and run lukewarm water over them all night long…do you have a strong hairdryer?

We are not much given to prayer, but I do make someone get up and read Lincoln’s proclamation, which I also keep in the binder.  It’s lofty rhetoric and a good reminder of why we go through all this hassle to come together wherever we are, for a “day of Thanksgiving and Praise…for such singular deliverances and blessings.”

And then?  Well, it’s time to get stuck into Christmas Carols.

This article was first published in “Russia Beyond the Headlines” and The Washington Post on November 18, 2009 under the title, “All Safely Gathered In,” and a link to the original version on the web may be found here.