A Hymn To PIMMS 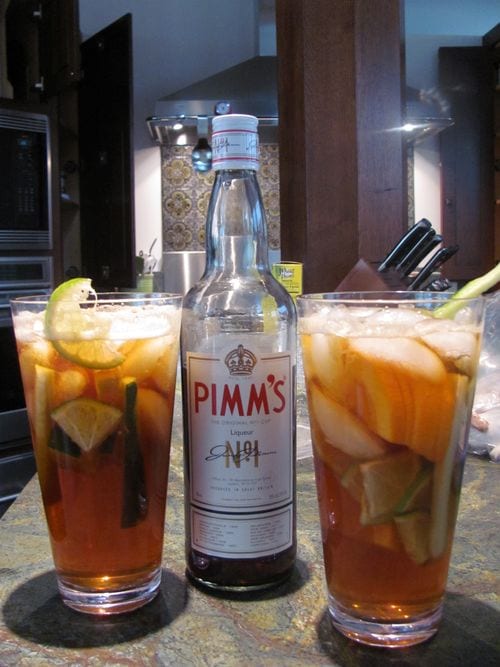 There is no question about it – it’s summertime!

Temperatures are hovering around 90°F, I’ve got my gas mask ready for the peat bog fires, and Velvet is at a marathon seven-day horse show that is literary called “Horseshows in The Sun” or HITS.  I’m bugging my nuclear family about sunscreen.  True to form, they are ignoring me.

When it gets this hot, there is only one thing for it and that is PIMMS, which, together with excellent men’s tailoring is Britain’s lasting gift to world culture.  This delightful gin-based liquor is mixed with fresh fruit (apples, limes, oranges, peaches, mint, cucumber, and strawberries) and topped up with what the Brits call Fizzy Lemonade and Yanks call 7UP.  It’s a big part of things like the Regatta at Henley.  I spent a good deal of the mid eighties in a pleasant PIMMS haze and I can tell you now, there are worse ways to spend time.

PIMMS is hard to run to ground in Moscow, which is why everyone including me prefers to fly British Airways and not with the octogenarian mean flight attendants of a leading American flag carrier, nor, indeed, with those clowns at Russia’s national carrier.  No, a nice two-hour layover at Heathrow’s Terminal 5 gives you enough time to stock up on life’s essentials:

1. As many bottles of PIMMS as you can carry.

PIMMS always reminds me of one of the top three most awkward events I’ve ever attended, which, when you’ve lived in Moscow for 17 years is saying a lot.  It was a Christmas party held out in one of the Gated Communities by one of HRH’s silly, wildly over-compensated bosses and his pretentious Russian wife.  It was one of those ill-conceived expat attempts to be egalitarian in Russia, which always go horribly wrong.  The silly boss, wildly over-compensated boss was from the Antipodes if you get my meaning, and his Russian wife (who was so much smarter than he it wasn’t even funny) was incredibly pretentious.   It was December and there was a raging blizzard.  We struggled out to the Gated Community with the entire staff, including the drivers (and you know your in Russia when a company hires drivers for the drivers) and got to their house for drinks before we had to wrap up and struggle over to some restaurant where we had to have Japanese food.  The Russian wife had set out a range of hor d’oeuvres on the coffee table, which baffled the drivers and their silent scared wives.  After the Russian wife explained to us what Brie and smoked salmon was, she then served us all PIMMS, complete with strawberries (at the time I am speaking of, strawberries cost about 12 dollars a piece) and cucumber and mint, and even an ice cube or two.

I could not for the life of me figure out what the hell they thought they were doing.  Until I remembered that Christmas in the Antipodes is a summer event.

But it was still silly.

So, mix yourself up a PIMMS and relax…wherever you are in the world!!!

What’s your most awkward event ever?  Did it involve PIMMS?  Have you ever been to an ill-conceived expat attempt to be egalitarian?  Tell us about it, won’t you, by hitting the comment button below.  And put on some sunscreen!!!