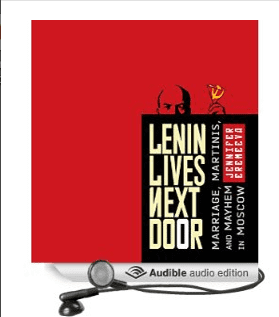 Welcome!  I’m delighted you are interested in learning more about the audio version of Lenin Lives Next Door!  I really enjoyed narrating it and I hope you will enjoy listening to this small sample of the beginning of Lenin Lives Next Door.  If you find you would like to purchase the entire audiobook, you can do so from audible.com, amazon.com (and its affiliates) or iTunes and listen to it on your favorite device.

Accolades for Lenin Lives Next Door: 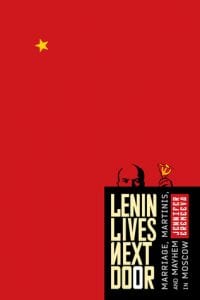 “You can’t make this stuff up.”  So says American writer, Imperial Russia enthusiast, and veteran expatriate, Jennifer Eremeeva, who has lived for the last twenty years in Russia with “HRH,” her “Handsome Russian Husband,” (a.k.a. “Horrible Russian Husband”) and their daughter.  And fortunately for Eremeeva, she didn’t have to make up a great deal of the stuff that inspired her first work of fiction. When Eremeeva (and her alter-ego heroine, coincidentally named Jennifer) quit her job to write full time, she became enthralled with the gray, dingy building across the courtyard, where, it turned out, Vladimir Lenin’s embalmed corpse was routinely freshened up and preserved. The result: Lenin Lives Next Door: Marriage, Martinis, and Mayhem in Moscow.

Based on Eremeeva’s two decades in Russia, Lenin Lives Next Door knits together vignettes of cross-cultural and expatriate life with sharp observation, colorful historical background, and engaging humor. Each thematic chapter is an anecdotal exploration of an aspect of life in today’s Russia, told with the help of a recurring cast of delightful Russian and expatriate characters. Lenin Lives Next Door introduces readers to Russians in their everyday milieu: at their dachas, in three-day traffic jams, and celebrating their 300+ public and professional holidays with mayonnaise-based salads. Lenin Lives Next Door is Russia as we’ve never seen it before:  through the eyes of a self-confessed recovering Russophile.

Lenin Lives Next Door: Marriage, Martinis, and Mayhem in Moscow is now available in both hardcover and ebook format through many bookstores online sources – order now through your favorite:

Praise for Lenin Lives Next Door

“An unabashed, hilarious, gutsy work of creative nonfiction, Lenin Lives Next Door is the triple-distilled product of two decades of Eremeeva’s life in Russia.

Eremeeva is a fine storyteller (full disclosure, she has previously contributed to RL), and her tales of expat hi-life, cross-cultural confrontations, and run-ins with history make for enjoyable (and often salty and non-PC) reading. If you want to know what it’s like to live in Russia for two decades without actually doing it, this is where I’d start.”

Eremeeva’s approach is tender and appreciating. It’s obvious from her tale that she respects the Russian culture and though she encounters obstacles and frustrations, derogatoriness is absent from the text.

So, even if you’ve not purchased a one-way ticket to Sochi, pick up a copy of Lenin Lives Next Door. You’re guaranteed to find it more insightful than a Washington Post article about Putin’s latest alpha-male feat and ten times more hilarious.”

“Lenin Lives Next Door, by 20-year-veteran US expat in Moscow Jennifer Eremeeva, is a an excellent addition to the canon that says much about the day-to-lives and aspirations of today’s Russians, still stranded between Soviet legacy and uncertain future, as well as the world of the expat in such a country.”

“If Jane Austen had been an American living in post-Soviet Moscow, she might have made similar observations to those in Jennifer Eremeeva’s Lenin Lives Next Door. This entertainingly bitchy comedy of manners describes itself as “creative nonfiction”; it is clever, funny and rude about everyone.”

-Phoebe Taplin, Russia Beyond the Headlines

Jennifer Eremeeva has the keen eye of a David Remnick or Hedrick Smith, but she is a whole lot funnier! Lenin Lives Next Door is a raucous look at how life in Russia has evolved from Soviet days to Putin s time, told by Russia s leading expat humorist…For anyone who appreciates witty prose and great storytelling, the vodka-infused trials and tribulations of Lenin Lives Next Door are a must-read.

Beth Knobel, co-author of Heat and Light: Advice for the Next Generation of Journalists, and former Moscow Bureau Chief, CBS News