Today is the All-Russia Day of Family, Love, and Fidelity. 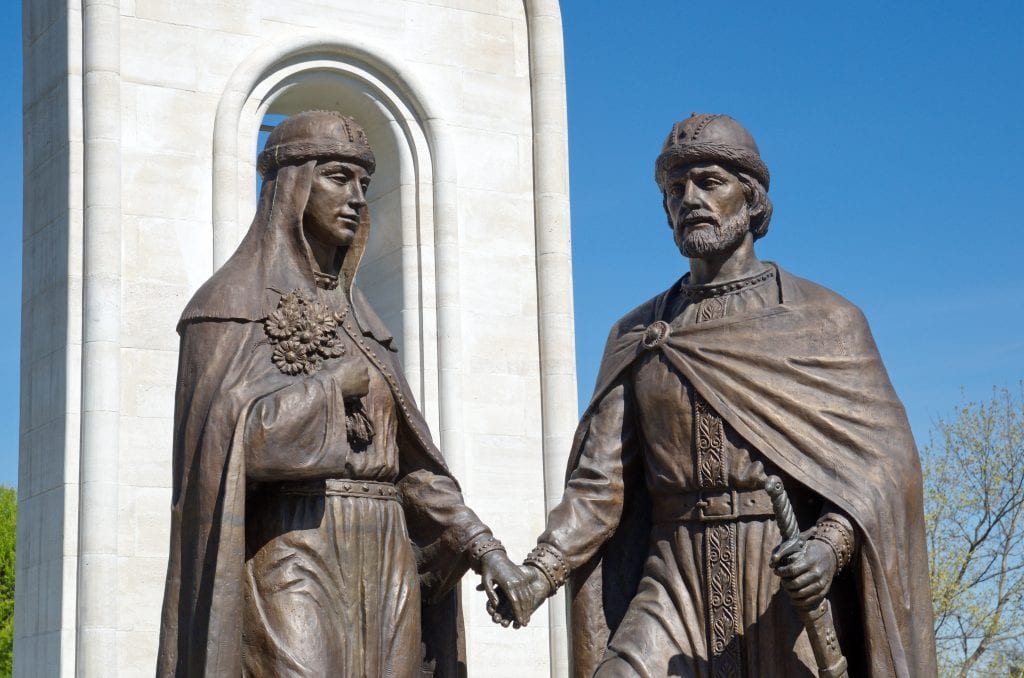 And not before time, either! After the chaos and naughtiness of yesterday’s St. John’s Eve, or Ivan Kupala.  Today’s holiday affords a timely reminder to any tempted to stray from the bosom of the family, what an awfully big mistake that would be.  Consider poor old Anna Karenina, for example, who’s tale of descent into adultery begins with Tolstoy’s immortal observation that:

All happy families are alike; each unhappy family is unhappy in its own way.

Staying faithful to your spouse (whether he or she has to be a member of the opposite sex is not mentioned, nor is any detail gone into as to the nature of the conception of the children) is the watchword of this holiday, which was introduced recently, in 2008, with the support and encouragement of Russia’s First Lady, Svetlana Medvedeva, (who I suspect wears the pants in that particular family.)  Mrs. Medvedeva is known to be a big supporter of the Russian Orthodox Church (none of this childhood obesity nonsense for her) and the choice of date for The All-Russia Day of Family, Love, and Fidelity was not random: today is a 780-year-old Orthodox holiday celebrating Saints Peter and Fevronia, the Prince and Princess of the ancient city of Murom, near Vladimir, who were canonized in 1547.  This makes it a nice Public Service Message brought to you by the State-Church joint venture.

A family is not just husband and wife, but also Granddad and Grandma and, most importantly, kids.

The Story of Peter and Fevronia: A Classic Russian Fairytale

The story of Peter and Fevronia is a perfect fusion of simple peasant girl marries a handsome prince after overcoming adversity in the shape of a dragon/ happily-ever-after / fairy-tales, pagan and chthonian (I know, I had to look it up too) symbolism, and good old- fashioned Russian family values.   I first read the entire story as a university student in Serge A. Zenkovsky’s Medieval Russia’s Epics, Chronicles, and Tales which is about the first thing they thrust at you when you embark down the path of Russian Area Studies. It is now on-line, so, if you really want to, you can read the whole thing too, but should you prefer a pithier synopsis, here is one:

Prince Peter, the brave and righteous younger brother and heir of Prince Paul of Murom, does battle with the devil disguised as a serpent, to defend the honor of his sister-in-law.  Smiting the serpent, Peter is splashed by its blood, which covers his body with sores and ulcers.   He searches the land for many years in vain for a cure until he encounters the simple peasant girl, Fevronia, weaving at her loom.  After a symbolically packed exchange of riddles, promises, and Peter’s eventual cure, they cut to the chase, marry, and settle down as the ruling couple.  Happily ever after, however, eludes them, as the wicked boyars (nobles) are not content with Fevronia, a simple peasant girl, taking precedence over their own wives.  So they begin to stir up trouble.  One particularly wicked (and married) boyar tries to take advantage of Fevronia during a sea voyage.   Fevronia reprimands him sharply, asking him to taste the water on either side of the ship and note the difference.  He does so and claims that there is no difference at all.

“And so it the nature of all women.”  (Replies Fevronia) Why then do you want to leave you wife and think about another woman?”

Having thoroughly squelched the boyars with this withering remark (?), things calmed down considerably for Fevronia and Peter, who once again went about the business of ruling in a pious, generous, and just manner.

Until Death Did They Part

They loved each other so much that they prayed to die at the same hour, and prepared a joint tomb.  To seal the deal, she became a nun, and he a monk, and they did die at the same moment, only the crowd in charge prepared to bury them in separate graves.  On the next day, however, their bodies were gone, ultimately found in the double tomb, where they remain to this day in the Church of the Holy Virgin in Murom.

Does Russia Need This Holiday?

I wondered to myself if Mrs. Medvedeva wasn’t pushing the envelope a little on this one.   Russia already has a lot of holidays along these lines:  Men’s Day (February 23rd) and International Women’s Day (March 8th) as well as Catholic St. Valentine’s Day (February 14th) which Russians have taken up with the same fervor they have sushi and mojitos.  But, as the Patriarch of the Russian Orthodox Church when he was Metropolitan Kirill of Smolensk and Kaliningrad noted,

February 14th (Valentine’s Day) is the Day of Those in Love, and being in love does not necessarily guarantee love, nor family, nor, for that matter, faithfulness.

With which sentiment, I am sure, both Fevronia and Mrs. Medvedeva would heartily agree. And, for that matter, Tolstoy too.  Things like this don’t hurt.  They might help.  You never ever know, do you?  Still wondering if this covers same-sex families though…

Well, Happy All-Russia Day of Family, Love, and Faithfulness to everyone who is into that kind of thing.