Time to get your ferns on, people! 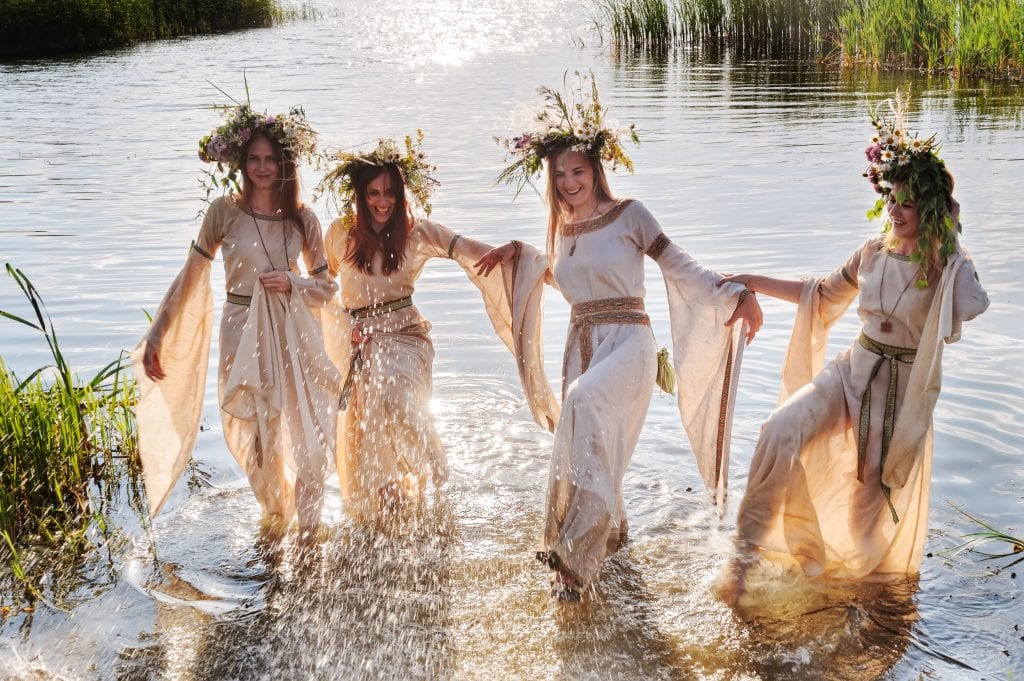 Today is St. John’s Eve, or, in Russian: “Ivan Kupala!”   This is Russian Midsummer, with all the same accompanying mischief, magic, and misdemeanors, as anywhere else in the world, just thirteen days late, because of that Gregorian – Julian calendar thing we’ve discussed before.  So, we’ll be expecting wild sexual midnight revels; naked bathing, bonfires, and all that will all make a refreshing change from Anna Chapman.

It is nice for me, as well, to take a tiny break from the more modern Russian institutions such as the traffic cops and the veterans of the custom’s service, and harken back to ancient pre- and early Christian Russia: wallow a little in all the Dan Brown/Bloodline Conspiracy/St. John Worship/Freemason stuff.  If you are into that kind of thing (and I am) today’s holiday can be an endless font (pun intended) of fascinating information.

Remember St. John the Baptist and the Dance of the 7 Veils?

St. John’s Eve in the Christian calendar celebrates the night before the birth of Jesus’s cousin, St. John.  Scripture tells us that John was about six months older than, and “prepared the way” for Jesus, so that fits nicely: if you buy into the idea that Jesus was born on December 25th (or January 7th according to the Russians).   St. John’s Eve, and its counterpart in the calendar, Christmas, are actually, as Alexander Hislop argues convincingly, replacements for much older pagan rituals surrounding the juxtaposition of light and dark.

Jesus’s birth was set by the early Christians to replace the pagan Saturnalia or Winter Solstice when the days begin to get lighter; John’s birthday replaced the Summer Solstice when the days begin to grow darker. This neatly captures the “twinned” or juxtaposed relationship between John and Jesus. St. John, a wild and zealous desert preacher, rigid and ascetic in his beliefs, was an annoying thorn in the side of both the Romans and the Jewish King Herod.  John publicly denounced Herod for his marriage to his brother’s widow, Herodias. John condemned this as adulterous and incestuous.  King Herod, famously beheaded John at the request of his step-daughter (so also niece) Salome, after she did a very effective dance of the seven veils (making her the Anna Chapman of the piece) for his guests.  The head, then, is served up on a platter.

Get your kit off!

And Now, For Some Templar Conspiracy Theories

St. John remains a shadowy and puzzling figure, associated historically with controversial and secretive organizations such as The Knights Templar and the Freemasons, at the heart of bloodline conspiracy theories, and mysterious symbols and hidden messages in art and literature.  The fact that his birth and not his death (August 19th in the Catholic calendar) is the key holiday is also significant since most saints are celebrated on the day of their martyrdom or death, and not the birth.

The Night of Fire and Water

St. John’s Eve in Russia was, and still is in some parts of the country, celebrated with the traditional focus on fire and water:  elements, like Jesus and John, who stand in direct opposition.  At dusk (which comes very late this time of the year), huge bonfires are lit to guard against the evil spirits, witches, goblins, and other fey creatures who, as the world turns to darkness again, begin to gain in strength and power. 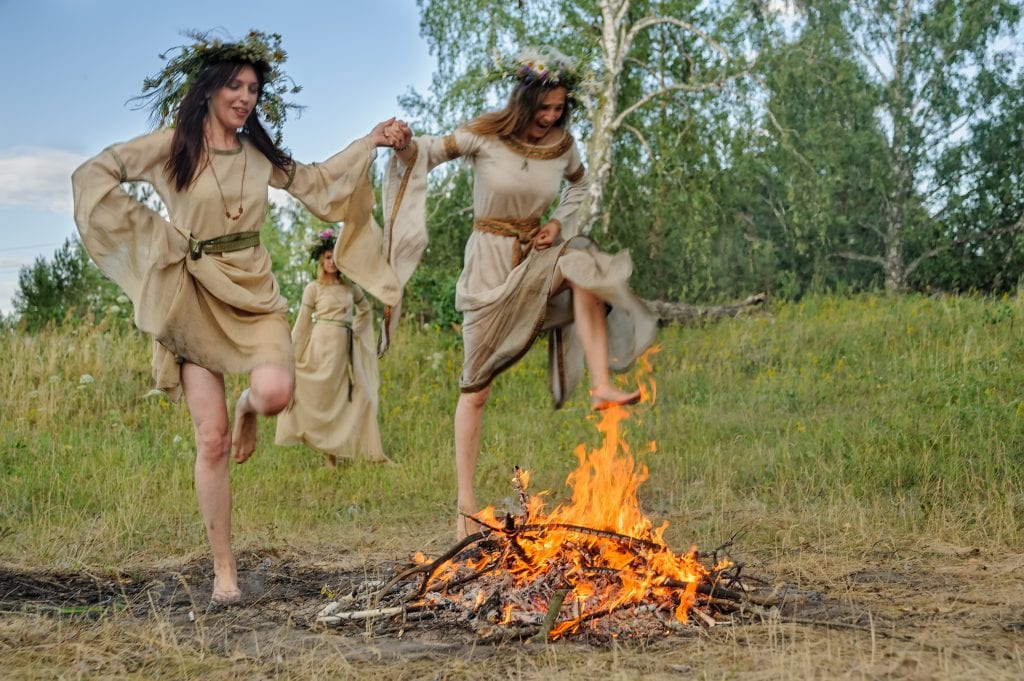 Men compete against one another to see who can jump the highest over the bonfire, ensuring the winner happiness and luck throughout the year.  Young women gather the traditional “Midsummer ferns,” which are woven into garlands and wreaths, worn throughout the evening and then dried, and kept to ward off evil spirits throughout the coming darkness. 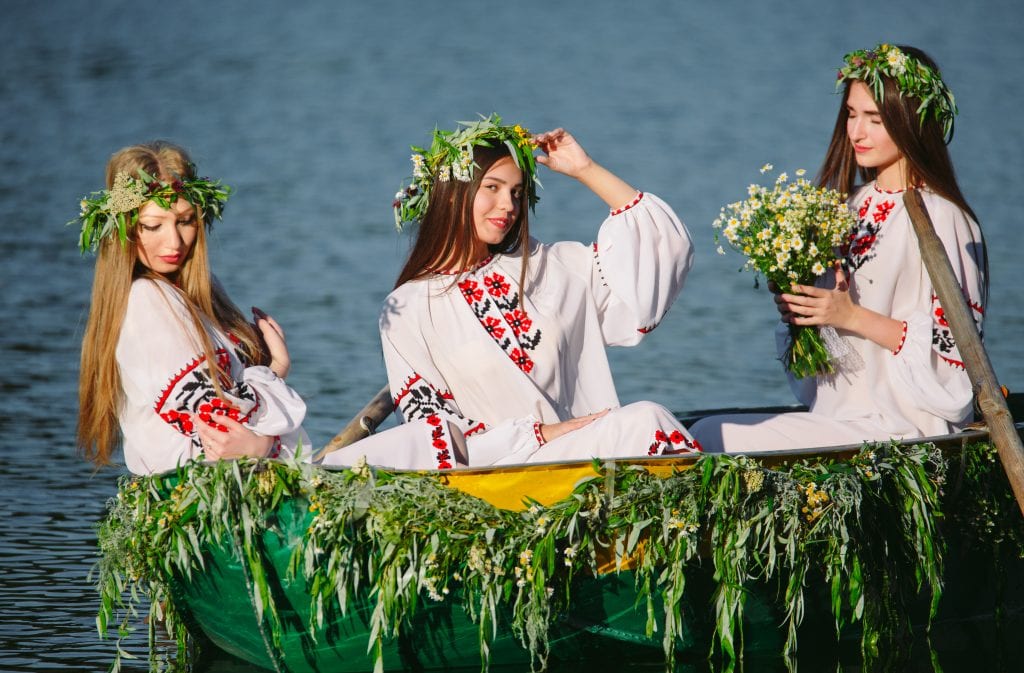 In another long-standing tradition, young women float their wreaths of Midsummer ferns with lit candles into the river, and the one, which floats the longest, ensures its maker happiness in love, long life, and good health. 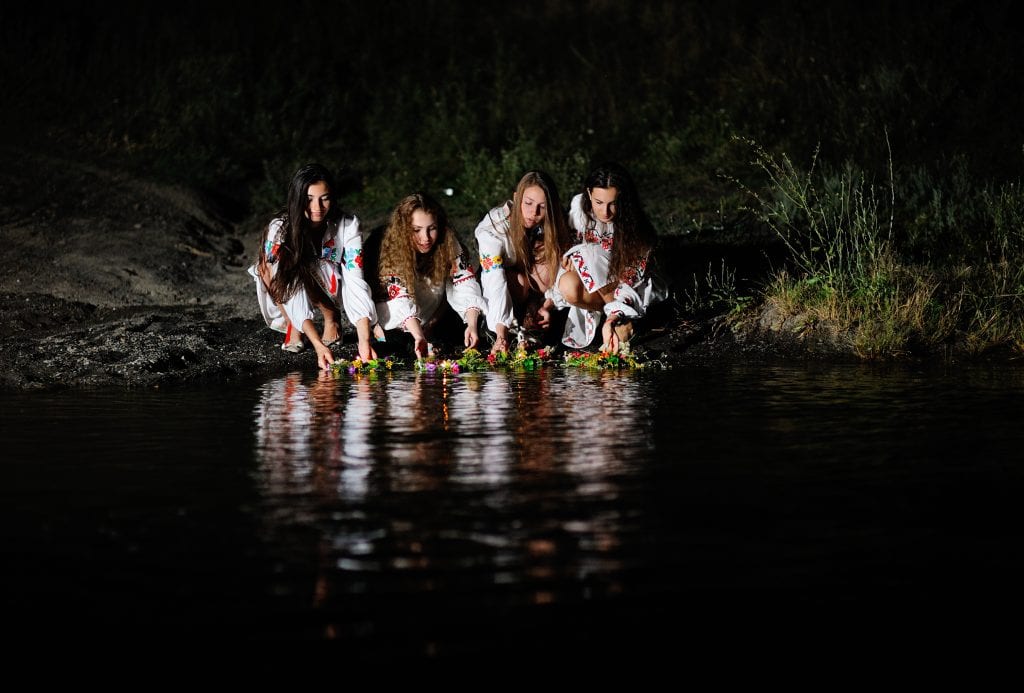 As the night lengthens, and a brief darkness hovers over the Northern sky, tradition says that the trees move about and speak to one another in the breeze, and the important water element is incorporated by naked bathing in ponds, rivers, and streams to purify both the body and the soul.

Things can begin to get slightly out of hand, which is wonderfully captured in Nikolai Gogol’s breakthrough short story “St. John’s Eve,” and Mussorgsky’s “Night On Bald Mountain,” which might sound strangely familiar to any of you with small children:

In closing, here are a few other interesting facts associated with St. John’s Eve, which may dictate the way you plan your day today:

1.    Traditionally, in Russia and other countries which celebrate St. John’s Eve, there is a not-unsurprising spike in the birthrate during the month of March.

2.    As I wrote in a recent article on Russian superstitions, witches will not come into your house if there is a needle or something sharp in the doorjamb or other portals to the house. This is particularly true on St. John’s Eve, so housewives scatter thistles or roses on their windowsills to keep the witches at bay.

3.    It is very important (Velvet, are you listening?) to lock up your horses on St. John’s Eve, lest the witches or goblins spirit them away…to Bald Mountain!

4.    If a girl collects seven different kinds of flowers and puts them under her pillow, she will dream of her future husband.

5.    If you climb over twelve garden fences during St. John’s Eve, your wish will come true.

Can you find a garden fence you could actually climb over in Russia?

Lots of research went into this one, and I am grateful to:

Astrology On The Web

“ And dedicated to the Holy Saints John: An inquiry into the designation of the Saints John as Patron Saints of Freemasonry”, by W. Bro Harry L. Ward Jr. PM on Pietre-Stones: Review of Freemasonry

Cracking The Symbol Code: the Hidden Message Within Church and Renaissance Art, by Tim Wallace-Murphy

The Two Babylons by Alexander Hislop

What have you got planned for tonight?  Let me know, won’t you…you don’t have to identify yourself in the comments…really.  Make up a name, go on!  Be clever, reference Shakespeare:  Hermia, Helena, Bottom, Titania, Puck…or be current, and call yourself Anna Chapman.  You get the idea.