Everything You Ever Wanted To Know About Great Lent

Great Lent 2015: A Guide to the Russian Orthodox Lenten Fast

Is it seriously Orthodox Lent already?  In which case, Mea Culpa! One of my gentle readers gently reminded me that I was late in posting this year’s Lenten calendar, which is absolutely true.   Apologies! Hopefully the long hours I’ve been putting in learning how to make infograms will make up for this tardiness.   I’ve got all the information into one handy poster-thingy, which you can see below and you can download it in pdf format (the best method if you want to stick it on your fridge).

A few words about Great Lent. Those of you who have been with me for a while will know that in past years, I’ve tried (and failed) to adhere to the rigorous strictures of Orthodox Lent, primarily as one-upmanship to HRH who, as you will recall, doesn’t really get the scriptural or liturgical “hows” and “whys” about Lent. Like many Russians these days, he feels it is a great time to take off some kilos.  It’s complicated, Russian Orthodox Lent, because it isn’t a straightforward, “You can’t eat this, you must eat that,” set of rules. It’s a very complicated calendar of “Today, you may not eat this, tomorrow, you may not eat that.”

For me, Lent starts out being a culinary challenge: like how original can you get in dealing with the deal-breaker of them all – no oil. But in the end? In the end it just pisses me off.

And, you know what?  I’m already pissed off!  Because I just got back from a longish stay in the US. As soon as I got over my jet lag, I girded my loins and did my usual swath through the supermarkets, the farmers’ markets, and so on. It isn’t a disaster, but it is a long way from where we were a year ago. The way I see it, it’s been Lent since they declared those sanctions, and it will continue to be until they are lifted.

But don’t let me blow your Lenten mojo! Go for it! And remember, the best treat of all on the green days is a large portion of McDonald’s fries and some bad chardonnay. #Heaven.

Casting about for new recipes to kickstart your Lenten Fast?  Try one of these!

Sorrel Soup:  The Ultimate Justification for Two Decades in Russia 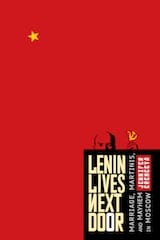 Readers, I’m thrilled to report that sales of Lenin Lives Next Door: Marriage, Martinis, and Mayhem in Moscow continue to be brisk and the reviews have been phenomenal! Short-listed for a total of eleven awards, here is just a sample of what bloggers, pundits, readers, and reviewers had to say about this hilarious look at life in the world’s largest country: